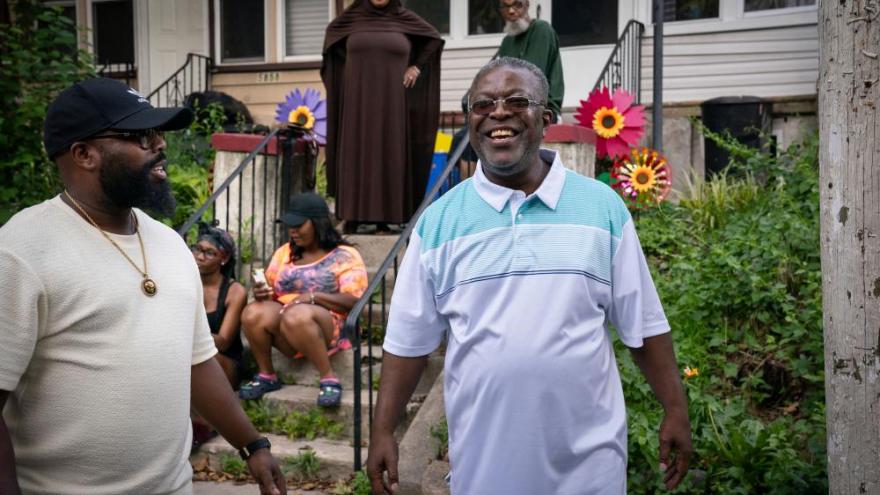 Risheen Crosland, left, and his father Curtis Crosland celebrate with family after the elder Crosland's release from prison after more than three decades.

(CNN) -- A Philadelphia man wrongfully convicted of murder is finally free after spending more than three decades behind bars.

"I feel exceedingly joyful, happy, that finally, you know ... after 30 or more years, after constantly knocking on the door for somebody to please hear me, that day finally came," 60-year-old Curtis Crosland told CNN.

He has now returned home to his five children, fiancée and 32 grandchildren. "It's a great feeling to still be dad, to be wanted and desired, and open arms to receive you, that's been the greatest part of being exonerated, that I come home to a loving family that wants and needs me," said Crosland.

Crosland's conviction -- based on testimony from two witnesses who later recanted statements they had made implicating him in the case -- was overturned in June.

His exoneration came after months of work by the Philadelphia Conviction Integrity Unit, established in 2018 by the office of Philadelphia District Attorney Larry Krasner. The unit was set up to investigate claims of innocence and wrongful conviction. Crosland's is the 22nd exoneration in which the unit has been involved, according to a news release from the CIU.

Crosland was found guilty in 1991 of second-degree murder, robbery, and possessing an instrument of crime in the 1984 killing of a Philadelphia store owner.

Documents that could have helped acquit or exonerate him were in files at the Philadelphia Police Department and the Philadelphia District Attorney's Office from the beginning of the case, according to the lawsuit. The documents contained troubling information regarding the credibility of two key witnesses as well as police records which pointed to another suspect, the lawsuit states.

But that information was suppressed and there was no other evidence that connected Crosland to the crime, the CIU said in the news release.

The killing of 'Tony' Heo

Il Man "Tony" Heo, a Philadelphia grocery and deli store owner, was killed by a masked shooter in 1984. Heo was shot just minutes before he was due to close his store for the night, according to Heo's son Song Il "Charles" Heo.

"He was a really fun guy, humorous, positive, smiling, joking person," said Heo's son. Heo said his father was very well liked in the community and had a reputation for helping people.

The crime went unsolved for years and Crosland did not become a suspect until 1987, according to his lawyer, Claudia Flores.

"I got a knock at my door (from police), I remember telling my wife and son 'I'll be back,' because I didn't do anything. I never came back. I never knew what I did, until they told me what I was accused of. It's like a kidnap," said Crosland.

The two witnesses upon whose testimony Crosland's conviction hinged had later recanted their statements implicating him, according to the lawsuit.

One of them, Delores Tilghman, told police in 1988 that she overheard a conversation where Crosland and others were "talking about the murder." She later recanted that statement, according to the lawsuit.

A second witness, Rodney Everett, told police officers that Crosland confessed to him that he carried out Heo's killing. Everett was himself in jail at the time, and hoping for a deal, the lawsuit states. Everett later testified that he had lied when implicated Crosland, according to the lawsuit. Documents which included Everett's statements were found in police and district attorney's files by the CIU.

Flores said it's common for "jailhouse snitches" to provide information to authorities to obtain leniency in their own cases. Everett told Flores when she interviewed him about Crosland's case that he felt coerced by police to give testimony, she said.

"It was just very brutal. They threaten you. They will use your family and they will tell you what they will do to your family, taking your kids," Everett told the Philadelphia Inquirer.

CNN has reached out to Tilghman and Everett for comment but has not heard back.

Krasner said the Philadelphia police and district attorney's office have historically violated their duty to seek justice and uphold the Constitution.

"Too often, they engaged in and tolerated horrendous abuses of power. Numerous police officers coerced confessions through physical abuse, verbal threats, and violations of constitutional rights," Krasner said in a CIU report.

CNN has also requested comment on the Crosland case from the Philadelphia Police Department, but has not received a response.

Crosland said his case illustrates how the criminal justice system is "broke, it's unfair, it's unconstitutional."

He maintained his innocence while in prison and filed multiple petitions, acting as his own lawyer, which he says he learned to do while studying law books in the prison's library.

"You have poor, indigent men that have no access to have a good defense. The system should be designed that every man be treated equally," Crosland said.

Crosland said he went to court every year during his time in prison to assert his innocence, but faced closed doors from the courts. "I don't think I ever had a full night's sleep, but I always told myself the day I'm exonerated I'm going to get my full night's sleep," he said.

Crosland said his faith in God kept him strong -- but that prison was still a "hellish" struggle every day.

It's challenging to have someone tell you when you are allowed to do basic things such as wake up, shower, or work, "especially by young (prison) guards who can sometimes be disrespectful," he said.

One of the toughest challenges for Crosland, he said, was being away from his family.

One his sons, Risheen Crosland, was only 2 years old when his father was sent to prison. When Crosland was exonerated, Risheen was 36 and had two children of his own.

"We faced a lot of childhood trauma not having a father ... and grew up in poverty," Risheen Crosland told CNN. "We didn't have new clothes, wearing hand me downs, having to be hungry at times ... gas turned off, electricity turned off," he said.

Beyond lacking financial security, he didn't get to form a normal relationship with his dad, he said. "I didn't learn how to ride a bike, play catch, play basketball or football (with my dad)." I didn't have those things growing up with my dad," he said.

Heo said he is happy that Crosland has finally been exonerated in his father's killing. "I firmly believe Crosland should have been a free man," he said.

Heo believes racism played a role in how the police and the prosecutor tried Crosland's case -- and that the prosecutor was racially prejudiced against his own family.

"I think the prosecutor took advantage of my mom's inability of understanding all the complications of the legal matter. They didn't feel responsible to explain all the legal details to us," he said.

"There was no translator during court proceedings, they were using Latin words. I didn't know what was being said, I didn't have a phone with Google, a lot of things slipped by."

Flores said every level of the criminal justice system is permeated with systemic racism, which contributed to Crosland's wrongful conviction.

"Most people serving life in prison without parole in Pennsylvania are Black men. Probably most of these police officers involved are white. It's a system saturated with systemic racism at every step. From the way crimes are investigated, to jury selection, to the fact that most prosecutors and judges are white," she said.