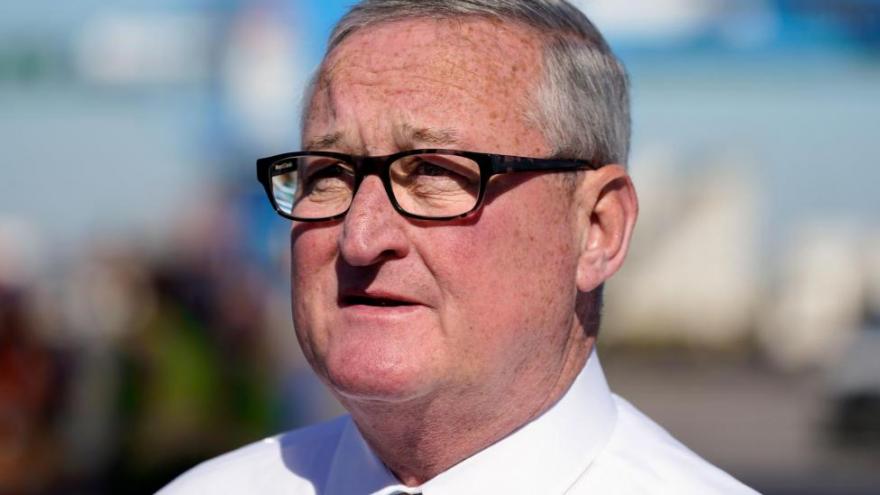 Mayor Jim Kenney says the killings are part of a "disturbing trend nationwide."

(CNN) -- It's daytime, and the woman screams, "Call 911! Call 911!" as pedestrians walk down a sidewalk near a South Philadelphia intersection packed with apartments and businesses. Seconds later, she is shot dead, marking the most dubious of milestones.

The city witnessed its 500th homicide of 2021 on Wednesday, matching a record set in 1990, according to police data. It's an average of about one homicide every 16 hours this year.

In the video aired by CNN affiliate WPVI, two pedestrians walk down the street around 4:30 p.m ET as the 55-year-old woman runs toward them pleading for help. One of the pedestrians bolts. A man enters the screen, pursuing the woman around an olive Jeep, extends his weapon and fires five shots.

Three of them hit the woman in the chest. The alleged shooter is seen later casually walking down the street. The woman was pronounced dead at the hospital, the affiliate reported.

Police believe the incident is domestic, and the shooter is being asked to turn himself in, Philadelphia police Inspector D.F. Pace told WPVI.

"We can't simply say that because it's the 500th it's any more special than any of the 499 that preceded it. Each is a life. Each is a person who had family," Pace said.

The shooting came just days after another suspected domestic incident rocked the city. Jessica Covington, a 32-year-old pregnant woman, was shot in the head and at least 11 times in the abdomen as the mother-to-be was unloading gifts from her baby shower, police told CNN affiliate KYW.

"There is a better way. We just put $155 million on the street with community groups, right? We have jobs available. We have wraparound services available," he said. "The message is going out to all those that find themselves at the level of despair where they think it's no other way, or to find themselves in whatever mindset it is that causes you to shoot a pregnant woman. Think about it, man. Don't continue this activity because it is killing our communities."

Calling the city's scourge of killings an "unconscionable loss of life that is almost too much to bear," Police Commissioner Danielle Outlaw reminded the community there is a standing $20,000 reward for information leading to arrests and convictions in any murder.

She acknowledged that even though homicides have been trending downward since the beginning of the year, the violence remains unacceptable.

"These victims are far more than a number," she said. "It's not about when we reach 200, 300, 500, 600. These are people. These victims are brothers, sisters, mothers, fathers, nieces, nephews, mentees, team members, classmates, many of them children. And for those whose lives have been tragically cut short, their life has left a void in the hearts of their families and their absence has left a profound impact on our community."

The numbers are a microcosm of a "disturbing trend nationwide," Mayor Jim Kenney said in a statement, touting the city's millions of dollars in investment to curb the violence.

US homicide numbers continued to rise in the first three quarters of 2021, but at a slower pace, one year after a record increase in murders that followed George Floyd's killing, according to the Council on Criminal Justice.

The spike in violent crime came as the Covid-19 pandemic swept the country, millions of people protested racial injustice and police brutality and the economy collapsed under the weight of the pandemic.

Philadelphia police have been working to target "pinpoint grids in multiple districts" and are on track to remove 6,000 firearms from the street, a 40% increase from 2019, Kenney said.

But Councilwoman Kenyatta Johnson pointed out in a statement the city is also on track for 550 homicides and 2,300 shooting victims.

"Quite simply, our community members are drowning, and we do not have life preservers to go around," he said. "This is a crisis of epic proportions. It is a moral crisis. It is an economic crisis. It is a racial justice crisis. It is a human crisis. Now is the time to act, boldly and urgently."