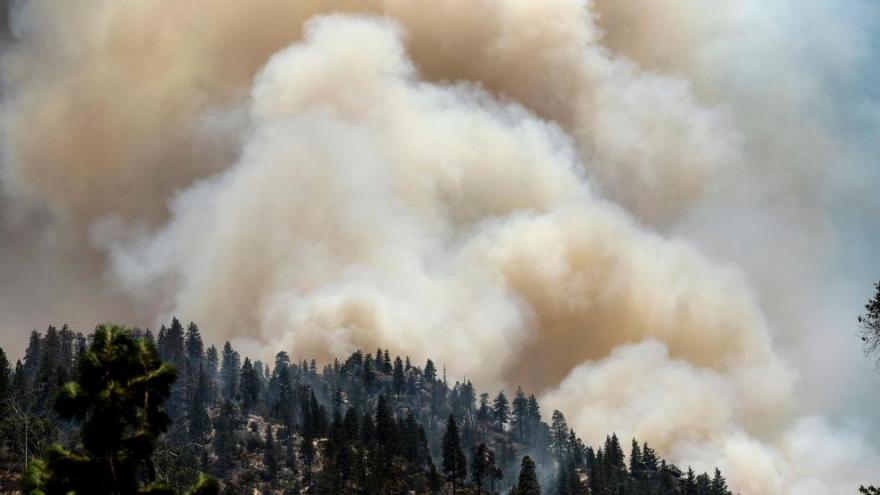 Smoke rises from the Dixie Fire burning along Highway 70 in Plumas National Forest on July 16. PG&E announced July 21 that it will bury 10,000 miles of its power lines to reduce the risk of starting any more blazes.

(CNN) -- The nation's largest utility, its equipment having played a role in sparking some of the deadliest and most destructive wildfires in California history, announced Wednesday it will bury 10,000 miles of its power lines to reduce the risk of starting any more blazes.

Pacific Gas and Electric (PG&E) made the announcement Wednesday, a day after it said the Dixie Fire, which has scorched more than 85,000 acres in Butte County, may have been sparked by equipment it manages.

"We are committing today to undertake one of the largest infrastructure projects in the history of our state," PG&E CEO Patti Poppe said at a Wednesday news conference in Chico.

The effort will start in the "highest fire-threat districts" and highest fire-risk areas, Poppe said.

According to a news release from the company, PG&E maintains more than 25,000 miles of overhead distribution power lines -- roughly 30% of its total distribution overhead system -- in the state's highest fire-threat areas.

"This is an undertaking that no one else has pursued at this scale, but we know that we can do it here."

The work is expected to take several years.

The company operates more than 106,000 miles of electric distribution lines in California and more than 18,000 miles of longer-distance transmission lines, according to its website.

The company said other efforts it's taking to prevent more wildfires including trimming more than a million trees and hardening "hundreds of miles of our lines... in preparation for future extreme climate conditions."

"I have thousands of people today on our system, making the system safer than it was yesterday," Poppe said. "Yet we are still dissatisfied, you deserve better."

PG&E officials said they've already buried nearly 65 miles of utility lines in Butte County, near the site of the infamous 2018 Camp Fire, the deadliest blaze in California history -- which tore through Paradise and killed 85 people. The utility later pleaded guilty to 84 counts of involuntary manslaughter and one count of unlawfully starting the fire.

In 2019, PG&E filed for bankruptcy after coming under pressure from billions of dollars in claims tied to deadly wildfires, including at least $7 billion in claims from the Camp Fire.

And earlier this year, criminal charges were filed against the company over the 2019 Kincade Fire, which scorched more than 77,000 acres of vegetation in Sonoma County, destroyed more than 300 structures and caused injuries. A Cal Fire investigation found the blaze was ignited by electrical transmission lines owned and operated by PG&E.