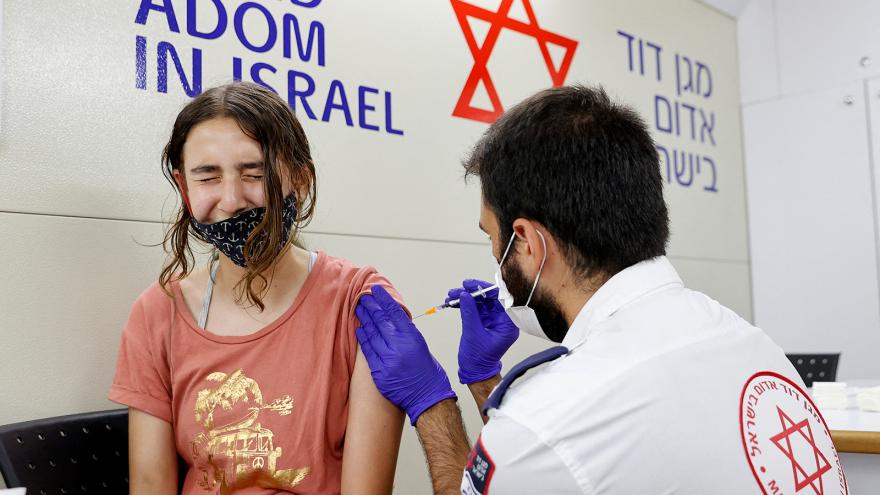 (CNN) -- The Israeli government says its analysis has shown the Pfizer-BioNTech coronavirus vaccine appears to be less effective against infections caused by the Delta variant compared to other strains of Covid-19.

In a brief statement issued on Monday, the government said that as of June 6, the vaccine provided 64% protection against infection. In May -- when the Alpha variant dominated in Israel and the Delta strain had not yet spread widely -- it found that the shot was 95.3% effective against all infections.

The government added that the vaccine was now 93% effective in preventing severe disease and hospitalizations, compared to 97% reported in the medical journal The Lancet in May.

The statement cited top line figures, but did not release underlying data or other details about its analysis. A team at Hebrew University said in a separate statement that it was too soon to tell how much the Delta variant was affecting vaccine efficacy.

In another statement Tuesday, Israel's Ministry of Health released some data about illness caused by Covid-19 and offered an expanded explanation of the vaccine's protectiveness. Despite an apparent decline in the vaccine's ability to prevent all infections during the spread of the Delta variant, the statement emphasized its continuing benefit in preventing severe cases.

Israel has deployed the Pfizer vaccine to everyone over the age of 12, and its early and quick rollout gave scientists one of the first real-world snapshots of its efficacy.

The government said the drop in efficacy is likely due to the spread of the Delta variant in Israel. This more infectious strain of the virus was first identified in India earlier this year and is also known as B.1.617.2.

Dr. Anthony Fauci, the director of the US National Institute of Allergy and Infectious Diseases, told CNN more granular data was needed to determine the exact reason for the drop in efficacy in Israel. While "the Israelis know what they're doing," the data is sparse, Fauci said, adding that the circumstances of the reported drop in efficacy are unclear.

Still, Dr. Richard Besser, former director of the US Centers for Disease Control and Prevention, told CNN the data from Israel is worth paying attention to, because Israel started vaccinating before the US and so "if there's going to be a problem, we'll likely see it there before we see it here in the United States."

"I take this as actually encouraging information, that these vaccines are still highle effective in terms of preventing hospitalizations, severe illness and death," Besser said.

Pfizer said it could not comment on unpublished data, but a recently published lab study it conducted with the University of Texas Medical Branch that found its vaccine was effective against lab-made versions of the Delta strain and others. The study found that full vaccination elicits an immune response that should be expected to protect people well against infection with the new variants.

Israel is one of the most vaccinated countries in the world, with more than 60% of the population fully inoculated and two-thirds having received at least one dose.

The statement highlights a big risk going forward: the emergence of new variants that might evade some of the protection provided by vaccines.

Public health officials are stressing that the current shots offer good protection against the Delta variant.

A study by Public Health England found this month that the Pfizer-BioNTech and Oxford-AstraZeneca vaccines were each highly effective -- at 96% and 92% respectively -- against hospitalizations from the Delta variant after two doses.

Separately, preliminary findings of a Scottish study published in The Lancet last month found that the Pfizer vaccine provided 79% protection against all infections from the Delta variant, compared with 92% against the Alpha variant. The same study, which analyzed data from 5.4 million people in Scotland found the the Oxford-AstraZeneca vaccine offered 60% protection against infection with the Delta variant compared with 73% for the Alpha variant.

Moderna's vaccine was found in lab experiments to work against new variants such as the Delta strain, the company said.

However, this can change if the virus mutates further. That's why doctors and public health officials want more people to get vaccinated. "The more we allow the virus to spread, the more opportunity the virus has to change," the World Health Organization (WHO) advised last month.

Israel lifted most of its coronavirus restrictions in early June. However, the government then reinstated an indoors mask mandate after a spike in cases caused by the Delta variant. It also appointed a "special manager" to prevent the entry of the coronavirus and its variants into Israel and approved a plan to build a permanent testing facility at Ben Gurion Airport.

The country has reported a slight increase in daily cases in the past few weeks, but only a handful of people have died of the disease in Israel in the past month.

Meanwhile, England, where the Delta variant has become the dominant strain, is pushing ahead with its plan to drop most of its remaining restrictions in just two weeks' time -- despite strong warnings from many scientists.

Speaking at a government news briefing on Monday, UK Prime Minister Boris Johnson said the effectiveness of the vaccine against death was allowing the government to unlock further, even though the number of cases is rising rapidly. He said the government needed to balance the risk from the virus and the impact of the restrictions on people and added the country "must find a new way of living with the virus."

"I want to stress form the outset that this pandemic is far from over ... we're seeing cases rise fairly rapidly. There could be 50,000 cases detected per day by the 19th [of July] and again as we predicted we're seeing rising hospital admissions, and we must reconcile ourselves sadly to more deaths form Covid," Johnson added.

The WHO has warned against this approach. "Many countries seem to be completely abandoning the idea that we have some control over this virus," Dr. Mike Ryan, WHO's executive director for health emergencies, said during a live Q&A session Monday. He warned against any "premature rush" to reopen at a time when cases are on the rise.