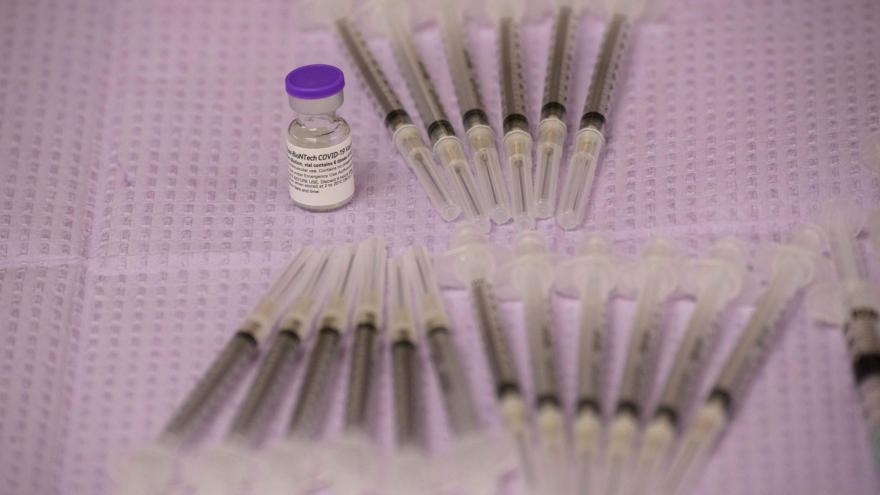 (CNN) -- A third dose of the Pfizer/BioNTech Covid-19 vaccine can "strongly" boost protection against the Delta variant -- beyond the protection afforded by the standard two doses, suggests new data released by Pfizer on Wednesday.

The data posted online suggest that antibody levels against the Delta variant in people ages 18 to 55 who receive a third dose of vaccine are greater than fivefold than following a second dose.

Among people ages 65 to 85, the Pfizer data suggest that antibody levels against the Delta variant after receiving a third dose of vaccine are greater than 11-fold than following a second dose.

The data, which included 23 people, have not yet been peer-reviewed or published.

During a company earnings call on Wednesday morning, Dr. Mikael Dolsten, who leads worldwide research, development and medical for Pfizer, called the new data on a third dose of vaccine "encouraging."

"Receiving a third dose more than six months after vaccination, when protection may be beginning to wane, was estimated to potentially boost the neutralizing antibody titers in participants in this study to up to 100 times higher post-dose three compared to pre-dose three," Dolsten said in prepared remarks. "These preliminary data are very encouraging as Delta continues to spread."

The data also show that antibody levels are much higher against the original coronavirus variant and the Beta variant, first identified in South Africa, after a third dose.

Earlier this month, Pfizer announced it has seen waning immunity from its coronavirus vaccine, saying it is picking up its efforts to develop a third dose that will protect people from variants. The company also specified it would seek emergency use authorization under the US Food and Drug Administration for a third dose in August.

But in an unusual move, two top federal agencies said at the time Americans don't need third doses quite yet and that it was not up to companies alone to decide when an additional dose might be needed.

US Surgeon General Dr. Vivek Murthy repeated that point Wednesday morning, telling CNN's Poppy Harlow, "People do not need to go out and get a booster shot."

Pfizer said it anticipates submitting data on a third dose of its coronavirus vaccine to the FDA as soon as next month, Dolsten said during Wednesday's earnings call.

"We are in ongoing discussions with regulatory agencies regarding a potential third-dose booster of the current vaccine and, assuming positive results, anticipate an emergency use authorization submission as early as August," Dolsten said.

In order for third doses to be administered to people in the United States, the emergency use authorization that the FDA issued for the vaccine would either need to be amended or, if the vaccine were fully FDA approved, a third dose could be given off label.

"We continue to believe it is likely that a third-dose booster may be needed within six to 12 months after full vaccination to maintain the highest level of protection, and studies are underway to evaluate the safety and immunogenicity of a third dose," Dolsten said, adding that data suggest antibody levels appear to decline around eight months after receiving a second dose of vaccine.

"Pending regulatory approval, we also plan to start an immunogenicity and safety study in August to evaluate an updated version of our vaccine specifically designed to target the Delta variant," Dolsten said.

He mentioned how the Delta variant is the "most transmissible" yet seen and now represents about 83% of sequenced Covid-19 cases in the United States.

Surgeon general: 'People do not need to go out and get a booster shot'

At this point, the decision on if and when booster shots are necessary will be made by agencies such as the FDA and CDC, Murthy said on CNN on Wednesday.

"This data from Pfizer, we've been in talks with them about what they're seeing with regard to their studies related to boosters," Murthy said, when asked about Pfizer's new data. "But at this point, I want to be very clear: People do not need to go out and get a booster shot."

"Ultimately, that collective information is what will drive any decision about boosters."

Murthy also said that the question of whether it was ethical for a third booster shot to be recommended while there is a major vaccine supply shortage in the developing world was a "critical question" because the ability to reduce the likelihood of future variants developing depends on tamping down spread of the virus around the world.

This is why the United States is making sure it is increasing manufacturing capacity in other countries, he said, working with vaccine companies such as Pfizer and Moderna to ensure they are producing more for the rest of the world and donating excess supply to other countries.