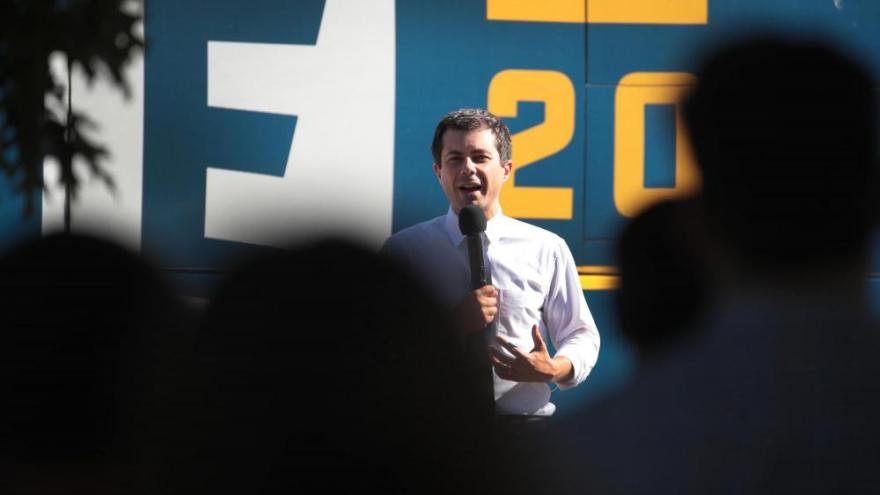 There is a new Democratic front-runner in Iowa, and his name is Pete Buttigieg.

(CNN) -- There is a new Democratic front-runner in Iowa, and his name is Pete Buttigieg.

The mayor of South Bend, Indiana, holds a clear lead in the first-in-the-nation caucus state, climbing to 25% in a new CNN/Des Moines Register/Mediacom poll of likely Iowa caucusgoers. That marks a 16-point increase in support for Buttigieg since the September CNN/DMR poll. This survey comes on the heels of other recent polls that have shown Buttigieg joining the top tier of the Democratic primary race in Iowa.

Behind Buttigieg, there is a close three-way battle for second with Massachusetts Sen. Elizabeth Warren at 16%, and former Vice President Joe Biden and Vermont Sen. Bernie Sanders each at 15%. Since September, Warren dropped six percentage points and Biden slipped five points, while Sanders gained four points.

Surveying the rest of the field, no other candidate gets double-digit support. Minnesota Sen. Amy Klobuchar lands at 6%, while five candidates register 3% -- Sens. Cory Booker of New Jersey and Kamala Harris of California, Rep. Tulsi Gabbard of Hawaii, investor Tom Steyer and businessman Andrew Yang. Former New York Mayor Michael Bloomberg, who has yet to officially announce a 2020 bid, gets 2%. The rest of the field receives 1% or less.

Buttigieg's significant rise comes in the wake of a heavy investment of time and money in Iowa. Over the last few months he has built one of the largest on-the-ground operations in the state, supplemented by a robust advertising campaign and strong public appearances, including a speech at the Democratic Party's biggest event of the year earlier this month in Des Moines.

His elevated standing in Iowa is grounded in steady support across different demographic groups. He does roughly as well with self-identified Democrats as he does with independents. He also performs about the same with previous caucusgoers as first-timers. And his support is nearly even in cities, suburbs, towns and rural areas.

The 37-year-old mayor does slightly better among those with incomes more than $100,000 (32%) and with self-described moderates (32%). His standing with union households (17%) and those who call themselves very liberal (12%) is weaker than his overall average.

Among the candidates vying for second in this poll, Sanders has the most variation when it comes to demographic groups. His support among those who describe themselves as very liberal (34%) is nearly 20 points higher than his overall standing. Like Sanders, Warren does better with that group (32%) than her overall standing.

Sanders also does better with younger likely caucusgoers, getting 27% of those under the age of 35, compared to Buttigieg at 20%, Warren at 18% and Biden at 9%. Meanwhile, Buttigieg (28%) and Biden (27%) run about even among the oldest caucusgoers -- those 65 and older -- a group the former vice president had led with by more than 20 points in September. For Buttigieg, his support among the oldest likely caucusgoers marks a significant jump from his 7% standing in September.

Biden's core strength remains the electability factor. Of the four candidates tested, the former vice president earns the most confidence in his ability to beat Trump. A majority of likely caucusgoers (52%) say they're almost certain or fairly confident Biden could win next November, compared with 43% who say they're not very confident or are almost certain he'll lose.

Another factor that points to Buttigieg's front-runner status is the 68% share of likely Democratic caucusgoers who say he is their first or second choice or being actively considered, up from 55% in September. Warren is close behind at 66%, though that's off slightly from 71% in September, when she topped the field on that metric.

The Massachusetts senator is the second choice of 20% of likely caucusgoers, followed by Buttigieg at 14%, and Sanders and Biden each at 13%. Harris is now the second choice for 7%, down from her 14% mark in June -- though 36% say they are still actively considering her.

The only candidates besides Buttigieg and Warren to hit 50% when combining first and second choice and actively considering are Biden at 58% (compared to 60% in September) and Sanders at 55% (up from 50% in September). Harris is now at 46%, down nine points from her September score.

Buttigieg's improved standing can also be attributed to his high favorable rating among likely caucusgoers -- 72% -- the best in the field and up three points from September. Warren's favorable sits at 71%, followed by Biden at 64% and Sanders at 61%.

What applies to porridge may also apply to politics.

In the case of Buttigieg, 63% of likely caucusgoers think his views are about right, the highest of the four candidates tested. Only 7% say his views are too liberal, while 13% feel they're too conservative.

Biden places second in the "about right" category with 55%, though that is down from 70% who said so in March. Like Buttigieg, 7% say his views are too liberal. But 28% say Biden's views are too conservative.

This divide within the Democratic Party is also reflected in how likely caucusgoers feel about the way candidates approach policy positions. A majority of likely caucusgoers (52%) would prefer the Democratic nominee to advocate for policies that have a good chance of becoming law, even if the changes aren't as big. That compares to 36% who want the nominee to push for big changes even if there's a lower chance those reforms would become law.

As one might expect, majorities of Buttigieg (62%) and Biden (60%) supporters prefer changes that are more likely to be enacted. Majorities of Warren (58%) and Sanders (54%) backers want big change even if it has a tougher chance of becoming law.

For these Democrats, defeating President Trump remains a priority.

Nearly two-thirds of likely caucusgoers (63%) say it's more important to them personally that the winner of the caucus be a candidate with a strong chance of beating Trump. Roughly a third (32%) say they want a candidate who shares their positions on major issues.

While there is more confidence in Biden's ability to win next November, feelings about Warren and Buttigieg are more evenly split on this question. For Warren, 46% are almost certain or fairly confident she will prevail, the same as the share who say they're not very confident or she's almost certain she will lose. For Buttigieg, it's 46% to 43%.

Among Biden supporters, 57% say they are almost certain he will defeat Trump. Supporters of other contenders aren't as rosy. It's 48% for Sanders, 35% for Warren and 27% of Buttigieg supporters. Despite all of Buttigieg's strengths in this survey, the lack of confidence among his own supporters in his prospects for defeating Trump could be a warning sign given the importance of the electability factor for Democrats.

With the caucuses now less than three months away, there is evidence more voters have made up their minds. Among likely Democratic caucusgoers, 30% say they have a first-choice candidate they've decided to back. That's a 10-point increase from September, but still leaves ample space for preferences to shift before February.

Buttigieg, meanwhile, leads among those who could still be persuaded with 29%, followed by Warren at 20%, Biden at 16% and Sanders at 10%.

Not only are Sanders supporters more committed, they're also the most enthusiastic. A majority of the Vermont senator's backers (51%) describe themselves as extremely enthusiastic about their choice. That compares with 35% for Warren, 33% for Buttigieg and 25% for Biden.

In a sign of potential weakness for Biden, 27% of his supporters say they are mildly or not enthusiastic about their choice. That compares with 18% for Sanders, 17% for Buttigieg and 16% for Warren.

There appears to be early widespread enthusiasm for the 2020 Democratic caucuses as 63% now say they will definitely rather than probably caucus in February. By comparison, the final Iowa poll released before the 2008 caucuses found 53% said they would definitely attend.

Here Warren leads the pack with 72% of her supporters saying they will definitely caucus compared with 63% for Sanders, 60% for Buttigieg and 59% for Biden.

The CNN/Des Moines Register/Mediacom poll was conducted by Selzer & Co. of Des Moines, Iowa, November 8 through 13 among a random sample of 500 likely Democratic caucusgoers reached on landlines or cell phones by a live interviewer. Results for the full sample of likely caucusgoers have a margin of sampling error of plus or minus 4.4 percentage points.