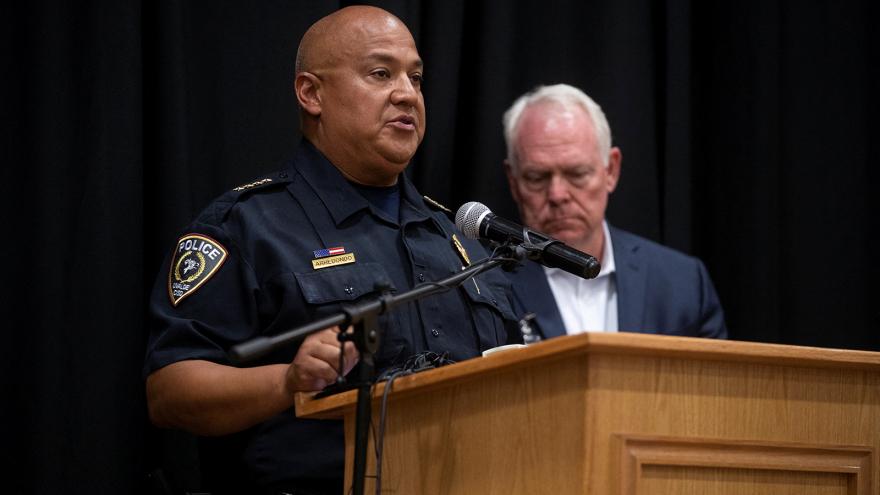 (CNN) -- Uvalde school district police chief Pedro "Pete" Arredondo has resigned his separate position on the Uvalde city council in the wake of the massacre at Robb Elementary School in May, according to a statement attributed to him in Saturday's Uvalde Leader-News.

"After much consideration, I regret to inform those who voted for me that I have decided to step down as a member of the city council for District 3," Arredondo said, according to the Leader-News. "The mayor, the city council, and the city staff must continue to move forward without distractions. I feel this is the best decision for Uvalde."

Arredondo's role in the police response to the May 24 shooting -- in which a gunman entered adjoining classrooms and killed 19 children and two teachers -- has been under intense public scrutiny and criticism from the Texas Department of Public Safety. That's in part because more than an hour elapsed before officers entered the classrooms and killed the gunman.

Arredondo was placed on leave from his job as school district police chief by the Uvalde Consolidated Independent School District last week.

Arredondo's resignation from the city council "is the right thing to do," the city said in a news release Saturday responding to the Leader-News' report. But no one from city government "has seen a letter or any other documentation of his resignation, or spoken with him," the release reads.

Arredondo had been elected to the Uvalde City Council on May 7, just weeks before the massacre. He was sworn in to the council position a week later.

CNN reached out to Arredondo's attorney Saturday for comment.

In the statement reported in the Leader-News, Arredondo said that "as we continue to grieve over the tragedy that occurred on May 24th, we pray for the families involved and our community."

"Uvalde has a rich history of loving and supporting thy neighbor and we must continue to do so. In speaking with other communities that have had similar tragedies, the guidance has been the same... continue to support the families, continue to support our community, and definitely, to keep our faith," Arredondo's statement in the newspaper reads.

"As I think about my life, from growing up as a child and to adulthood, Uvalde has held an attraction that is very unique. At the center of that attraction, is our community members. Together, we will keep Uvalde strong. Uvalde strong, Uvalde home," Arredondo's statement in the Leader-News reads.

Arredondo, the chief of the Uvalde Consolidated Independent School District Police Department since March 2020, was identified by state authorities as the on-scene commander during the shooting.

Several law enforcement officers arrived at the school within minutes but allowed the gunman to remain in the classrooms for 77 minutes until they finally entered and killed him, according to a timeline from the Texas Department of Public Safety (DPS), which is leading a review of the incident. The lengthy delay contradicted widely taught protocol for active shooter situations that call for police to immediately stop the threat and came even as children inside repeatedly called 911 and begged for help.

"Three minutes after the subject entered the West building, there was a sufficient number of armed officers wearing body armor to isolate, distract and neutralize the subject," McCraw said. "The only thing stopping the hallway of dedicated officers from entering rooms 111 and 112 was the on-scene commander, who decided to place the lives of officers before the lives of children."

Other officials have questioned McCraw's motivations in blaming Arredondo, given that dozens of law enforcement officers from an array of departments responded to the scene. Uvalde Mayor Don McLaughlin said McCraw has continued to "lie, leak, mislead or misstate information in order to distance his own troopers and (Texas) Rangers from the response."

Arredondo, who has worked in law enforcement for nearly 30 years, has not spoken substantively to the public about his decision-making that day, but he told the Texas Tribune in an interview that he did not consider himself the on-scene commander.

However, at least one of the responding officers expressed the belief that Arredondo was leading the law enforcement response inside the school, telling others, "the chief is in charge," according to the DPS timeline.

Arredondo also told the Texas Tribune he did not instruct officers to refrain from breaching the classrooms.

In the wake of the release of the DPS timeline and further details about the law enforcement response, Uvalde CISD superintendent Hal Harrell placed Arredondo on leave from his position as school police chief on June 22.

"Because of the lack of clarity that remains and the unknown timing of when I will receive the results of the investigations, I have made the decision to place Chief Arredondo on administrative leave effective on this date," Harrell wrote in the announcement.

As for Arredondo's brief time on the city council, he had not yet attended any public meeting. Council members unanimously voted to deny him a leave of absence from future sessions, leaving open the possibility that he could have been removed from office if he continued to miss meetings.