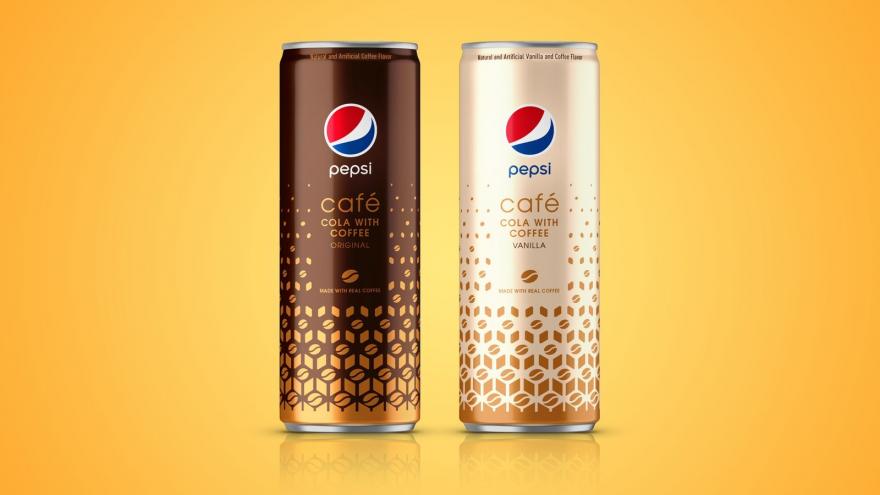 (CNN) -- Like its rival Coke, Pepsi is launching a new coffee-infused cola.

Pepsi Café, which also comes in a vanilla flavor, will hit shelves throughout the United States in April for a limited time. It's nearly twice as caffeinated as a regular soda.

For Pepsi, the new beverage is a way to leverage consumer trends to invigorate its core product, which could certainly use a boost.

"Cola has been a pretty stagnant category over the last 20-30 years," said Todd Kaplan, vice president of marketing for Pepsi. "As consumer preferences continue to evolve, we as Pepsi need to evolve as well to better meet those needs."

While cola remains flat, other types of beverages are gaining traction. Consumers are increasingly interested in functional beverages, which offer a nutritional benefit or a boost of energy. Ready-to-drink iced coffees also are growing. And people are embracing mixed beverage categories. White Claw is an example of a successful product that blurs beverages, seltzer and alcohol, with sales that are expected to surpass $1.5 billion this year.

Pepsi previously tried to get consumers on board with coffee colas. In the nineties it tested a coffee product called Pepsi Kona, and in the mid-aughts it briefly marketed another called Pepsi Max Cino.

Those products didn't take off, but now Pepsi thinks the time is right for a new version of the product. "We think the consumers today have now caught up with this trend," Kaplan said.

When consumers tested out the new version, they were "quite surprised about the synergy between cola and coffee," said Danielle Barbaro, director of research and development at PepsiCo. "Once they tasted it, they saw that the flavors really blended."

Barbaro called the recipe "cola forward," with an "authentic, coffee flavor to finish." The vanilla flavor is designed to offer a milkier, more latte-like taste. Pepsi didn't disclose how much the product will cost.

Pepsi may also benefit from Coca-Cola's efforts to market its own coffee cola.

Coke — which also briefly sold a coffee cola, Coca-Cola Blak, in the 2000s — recently brought back a new version of the product.

Coca-Cola With Coffee, or Coca-Cola Plus Coffee, is currently available in several international markets, where it has performed well, according to the company. Coke hopes to eventually bring the product to the United States, but hasn't committed to doing so.

Pepsi, however, isn't ready to go all in on coffee cola quite yet.

"The concept of cola infused with coffee, for people to initially wrap their head around until they try it, it's gonna take some time to catch on," Kaplan said. Still, he added, "we think there's a real market there."