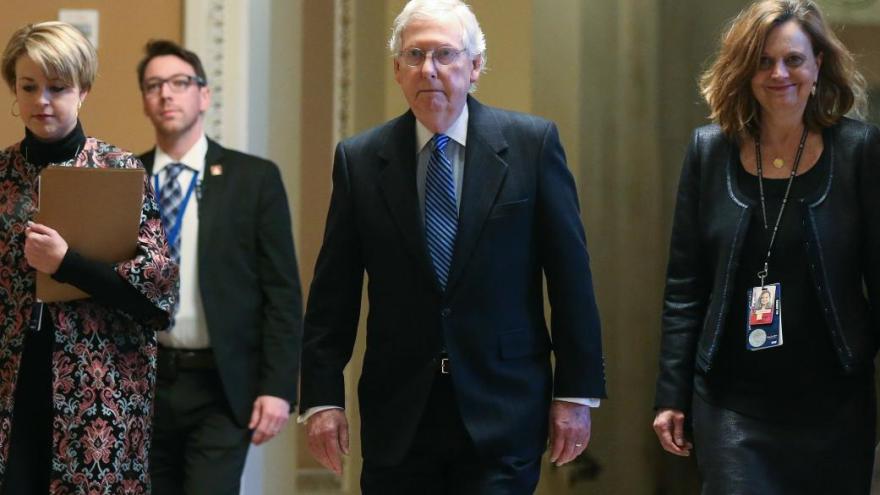 New GOP divisions surfaced over whether to send more money to state and local governments -- as Democrats have demanded -- in the next round of stimulus funding to respond to the Covid-19 pandemic ravaging the economy.

(CNN) -- New GOP divisions surfaced Tuesday over whether to send more money to state and local governments -- as Democrats have demanded -- in the next round of stimulus funding to respond to the Covid-19 pandemic ravaging the economy.

During their first face-to-face meeting after five weeks away from Washington, Senate Republicans engaged in a vigorous debate over lunch about whether to dump more money into state and local governments, according to lawmakers.

A big focal point of Republicans' discussion Tuesday: whether to give states more flexibility to use their existing federal dollars to pay for lost revenues. Senators say there's a growing consensus behind that, even though some are flatly opposed.

GOP Sen. Tim Scott of South Carolina said it was just "common sense" to give the states some more flexibility on existing money.

But there's an open debate among GOP senators about whether to give state and local governments more money, with a number of Republicans sympathetic to the sharp revenue losses experienced by states and cities as others want to hold the line amid the growing deficit concerns.

"People were pretty fired up on both sides of that," said another GOP senator, speaking on the condition of anonymity.

During the lunch, Sen. Rick Scott of Florida sharply disagreed with senators lobbying for more money for states and localities, he told CNN. Scott said that he had no interest in bailing out New York.

Sen. Roy Blunt, a Republican from Missouri and member of leadership, said he was "a little reluctant" to say that states should have more flexibility on the money they have.

"Right now the restriction on the money they have is coronavirus-related," he said, adding later, "I don't think revenue replacement is the best way for us to respond to states."

One issue: There's also a growing realization that the Senate could have to act soon -- potentially by next week -- to add more money to the Small Business Administration's Paycheck Protection Program when it runs out of money. Any legislative package would need to clear a filibuster in the Senate and pass the House, meaning it would open the door to a bevy of Democratic demands as House Democrats plan to introduce what they're calling a "transformational bill" within days.

"I think we are going to have to pass something" as soon as next week, said the senator who spoke on the condition of anonymity.

Braun said the additional funding for small businesses was something most GOP senators "would be interested in."

"I would," he said. "Especially if then it is limited in size towards all the smallest businesses that didn't get to the table the first two times."

Braun agreed there was "no real kind of rush to do anything at this point."

"I think everyone in our conference is getting a little cautious about how much more can we do, as opposed to correcting it from a grassroots way by getting the economy going," Braun said.

Senators said members also discussed at Tuesday's Republican lunch the demands by GOP leaders for liability protections for businesses, with Sen. John Cornyn of Texas telling senators how more than 770 lawsuits have been filed already. Democrats -- including Pelosi and Senate Minority Leader Chuck Schumer of New York -- have criticized the proposal to add liability protection in the next funding package.

While there isn't much appetite in the Senate GOP conference to immediately pass a big bill, House Democrats are pushing ahead with their own plans.

House Majority Leader Steny Hoyer of Maryland told reporters Tuesday that the chamber is still putting together a bill and could vote as soon as next week. He said that Pelosi would try to engage in discussions with the administration if it could support what Democrats are seeking.

"We don't want to do this just for show," Hoyer said.