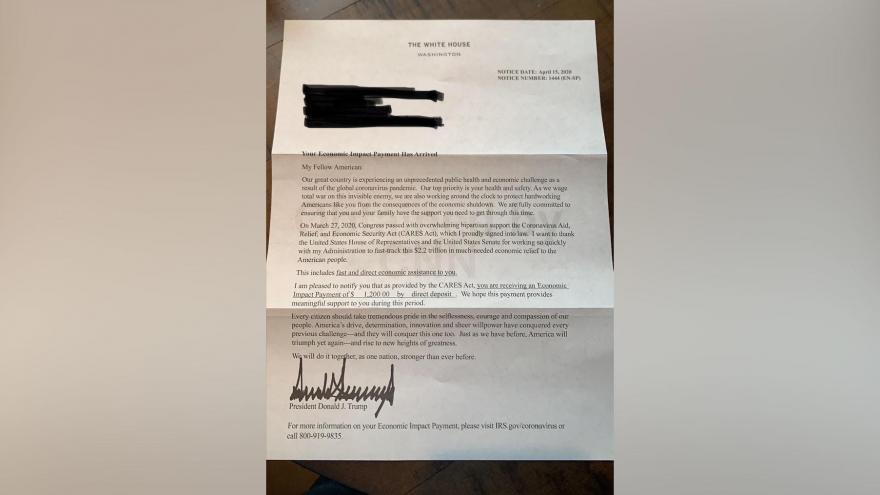 (CNN) -- If you're getting money from the federal government as part of the recent stimulus response to the coronavirus, you'll also get a letter from President Donald Trump explaining why.

CNN has obtained a copy of the letter signed by the President and sent to recipients of the stimulus payments.

The one-page letter arrives in an envelope from the IRS as part of the Treasury Department, with both postage and fees paid for by the IRS, according to a notice on the envelope.

The letter reads, in part, "We are fully committed to ensuring that you and your family have the support you need to get through this time," and notifies the recipient exactly how much they would receive and how. On the other side of the letter is a translated Spanish version of the same text.

Trump goes on to thank Congress for working with his administration in passing the Coronavirus Aid, Relief, and Economic Security Act (CARES Act), "which I proudly signed into law."

CNN has spoken with recipients in Connecticut, Pennsylvania, New Jersey and Maryland who have received the letters.

During Friday's White House briefing, Trump said the act required the government to "send out a notice of what benefits Americans are receiving; to fulfill the requirement, the Treasury Department is mailing a letter to me."

In the legislation there is a section saying "Not later than 15 days after the date on which the (Treasury) Secretary distributed any payment to an eligible taxpayer pursuant to this subsection, notice shall be sent by mail to such taxpayer's last known address. Such notice shall indicate the method by which such payment was made, the amount of such payment, and a phone number for the appropriate point of contact at the Internal Revenue Service to report any failure to receive such payment."

The Treasury Department said Friday more than 88 million people received stimulus payments in the past week. Approximately 62 million people were still waiting for the payments as of April 17. Individuals who earn less than $99,000 are due up to $1,200, and married couples can receive up to $2,400. The amount falls as income goes up.

A controversy erupted once it was known that the physical checks sent out with the stimulus payments included a note on the bottom left with Trump's name on it. Democrats criticized that inclusion. Treasury Secretary Steve Mnuchin told CNN's "State of the Union" last week it was his idea to put the name on the check.

Trump said earlier this month that adding his name to the checks was not a big deal and it would not delay the process of Americans receiving paper checks.

Regarding who decided the method of notice would be a letter from the President, the White House did not provide a comment. The Treasury Department did not immediately return a request for a comment.