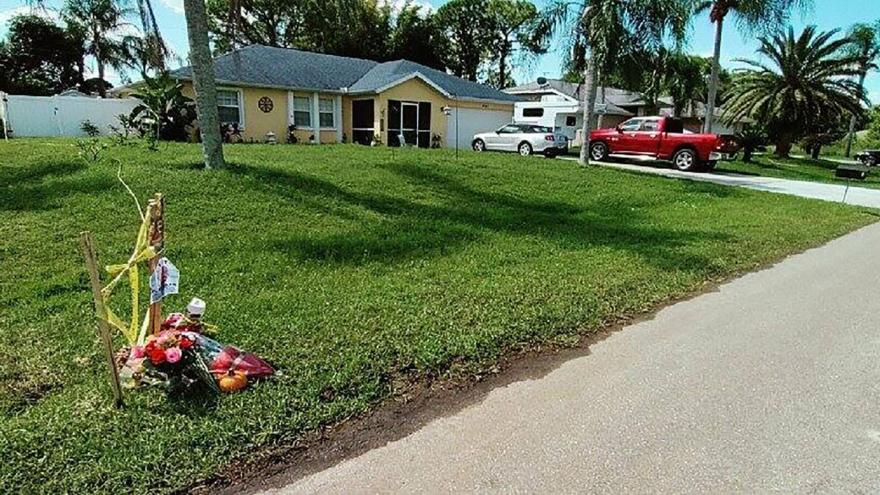 A small memorial of flowers outside the Laundrie home in North Port, Florida.

(CNN) -- While the FBI is adjusting its sails in the search for Gabby Petito's fiancé, Brian Laundrie, people across the country are delivering flowers to the Laundrie home in North Port, Florida, in an effort to honor Petito's life.

Those within the community are hand-delivering flowers to the home, but those from afar are paying for flowers to be delivered.

Petito's remains were found in a camping area in Wyoming's Bridger-Teton National Forest last week near where the couple had last been seen, and a coroner has ruled her death a homicide. Laundrie's parents told investigators they have not seen their son since September 14, when he left their home with a backpack, saying he was going to a nearby nature reserve.

For days now, Petito has been honored in communities across the country: A memorial was held on Sunday in Holbrook, New York, near Petito's hometown on Long Island, a vigil was held in Salt Lake City last Wednesday, a small table of remembrance has been set up at a restaurant in Wilmington, North Carolina, where she used to work, according to CNN affiliate WWAY, and at City Hall in North Port, a memorial has been growing with visitors dropping off flowers, lighting candles, or just praying, according to CNN affiliate WWSB.

"I felt compelled to participate because the silent treatment is a profound way to completely invalidate a victim ... essentially denying their existence ... and sending #flowersforgabby to the Laundrie family is a way of saying, we will not let you give Gabby and other victims the silent treatment," Stephanie Harris, one of the people who sent flowers to the Laundrie home told CNN. "She was here."

That's why all the way from Chicago, with no real connection to Petito or Laundrie families, she felt compelled to send flowers in an effort to support Petito and let others know that she will not be forgotten.

The FBI is focusing on intelligence-based leads after officials spent more than 10 days searching through a 25,000-acre nature reserve in North Point, Florida, according to police, and visited Laundrie's family home to request personal items of his to assist with DNA matching, the Laundries' lawyer told multiple news outlets.

"It is well known that the 'silent treatment' is a tactic of emotional abuse," Harris said. "And by refusing to acknowledge her (Petito), on a real and human level, the (Laundrie) family has perpetuated the silent treatment."

A reporter posted a video on Twitter suggesting the police would be removing the flowers outside Laundrie's home, but so far the police department hasn't received any complaints, but if they do, Taylor said they "will document and advise those impacted to contact the flower company and request to cease deliveries."

Like Harris, Stephanie Savage in Houston, Texas, was also motivated to send a flower arrangement on Sunday and it was delivered Monday, marking one of the first deliveries to the Laundrie home.

"I wanted the memorial to Gabby to start in their (Laundries') front yard because she lived there and then that exploded on Twitter, everybody was like 'I want in,' Savage told CNN. "Initially, I just wanted some recognition for Gabby that she's not going to be forgotten. I understand the focus right now is on the Laundrie family, but she was the ultimate victim here."

Now, Savage wants people to pivot from flower deliveries to monetary donations to foundations "that help women in these situations so they don't end up like Gabby," she said. "I don't want her to be forgotten."

Lilith Cain also arranged for flowers to be delivered from Springville, Indiana, and told CNN she and members of a Facebook group have bonded over being domestic violence survivors themselves, a love for internet sleuthing and true crime in general.

"We all jumped on board, spreading the hashtag across all social media, hoping to fill the entire lawn," she said. "It was a way to keep pressure on the Laundries, but in a beautiful way that memorializes Gabby. Peaceful protest, so to speak."