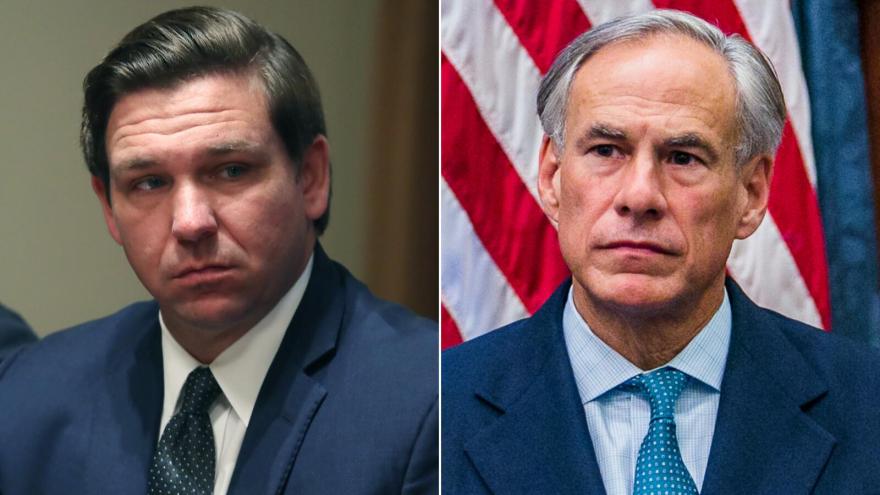 The holiday-season legal battle ahead of the January 4 start date for the vaccinate-or-test requirement for large businesses underscores the partisan and cultural divide over the Biden administration's efforts to end the coronavirus pandemic that has now killed more than 750,000 Americans since early 2020.

"I just think people are so sick of constantly being bossed around, restricted, mandated, all these different things," DeSantis told reporters Thursday. "We've had enough of it and we want people to be able to make their own decisions."

By Friday afternoon, 26 states had sued over an Occupational Safety and Health Administration rule rolled out Thursday that would require businesses with 100 or more employees to have their workers fully vaccinated for Covid-19 or tested on a weekly basis. The rule would cover 84 million employees.

The list of Republicans whose states have joined the legal battle against Biden's mandate is a who's-who of those aligning themselves for potential 2024 bids for the GOP's presidential nomination -- or for prominent roles, if former President Donald Trump runs again.

"People have freedoms and they have personal responsibility over their health," South Dakota Gov. Kristi Noem said in a Twitter video in which she said her state would sue, too. "Here in South Dakota, that will be protected and defended."

Abbott, after Texas Attorney General Ken Paxton and several other states filed a separate lawsuit, said on Twitter: "This mandate is an unprecedented overreach by the executive branch of the federal government and must be halted,"

In Congress, Senate Republicans are launching an effort to overturn the mandate by holding a vote on a resolution disapproving of the rule, yet it is unlikely to pass with Democrats in control of the chamber.

The Republican National Committee on Friday said it was also asking a court to block what it characterized as "unlawful overreach" by Biden's administration.

"On behalf of frontline workers who protected us through the pandemic, small businesses recovering from Democrat-led lockdowns, and American workers trying to provide for their families: we will see you in court," RNC Chairwoman Ronna McDaniel said in a statement.

The lawsuits aimed at the OSHA rule are separate from a series of lawsuits filed in recent weeks against the administration over a mandate that targets federal contractors. In September, Biden signed an executive order requiring all employees of contractors that do business with the federal government be vaccinated. There is no test-out option for the covered federal contractor employees.

While states ready themselves for a new round of legal challenges, local vaccine mandates are already operating in some parts of the country. In some places, those mandates have led to clashes between local officials and law enforcement unions and other groups of government employees that do not want to follow them.

The aggressive steps DeSantis, in particular, have taken puts a spotlight on a governor who has emerged as a leading 2024 presidential contender within the GOP.

Florida's legislature is due to return to Tallahassee later this month for a special session aimed at enacting laws that would discourage businesses from imposing pandemic-related mandates.

Nikki Fried, the Democratic Florida agriculture commissioner who is taking on DeSantis in his bid for a second term next year, said in a statement that she does not support mandates, but noted that DeSantis is challenging federal mandates even after imposing his own state-level mandates on local governments.

"We are in this position due to a failure of leadership from Governor DeSantis who has been providing a platform for conspiracy theorists and extremism by denying the efficacy of vaccines and science-based public health policies," Fried said in a statement. "The governor himself is now trying to enact his own mandates to block businesses, local governments, and school boards from protecting their own constituents. Once again, Governor DeSantis is putting his personal ambitions ahead of the well-being of Floridians."