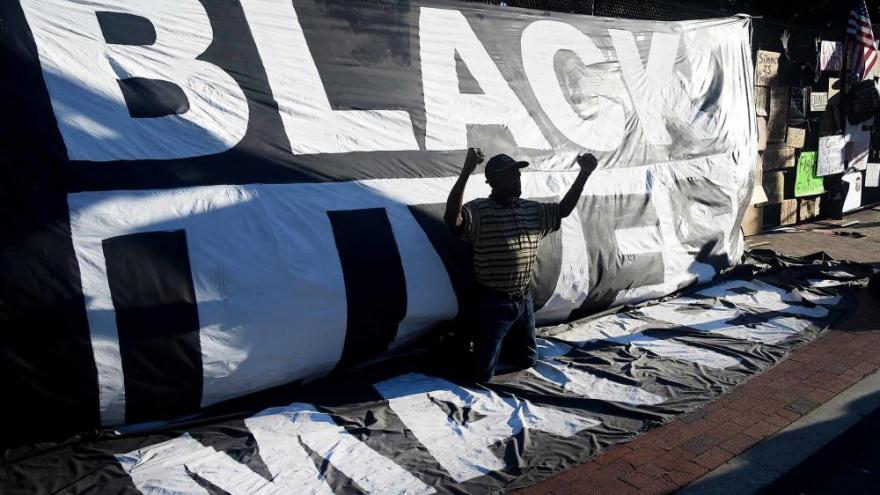 Digital support for Black Lives Matter is at an all-time high: Millions of people are using the hashtag daily. Recent polling suggests Americans' views of police and the current protests against police brutality are changing offline, too.

(CNN) -- Digital support for Black Lives Matter is at an all-time high: Millions of people are using the hashtag daily. Recent polling suggests Americans' views of police and the current protests against police brutality are changing offline, too.

The use of the Black Lives Matter hashtag peaked three days after George Floyd died in police custody, a Pew Research Center analysis published this week shows. #BlackLivesMatter was tweeted 8.8 million times that day, according to Pew. For the following 2 weeks, users tweeted #BlackLivesMatter an average of nearly 3.7 million times per day, Pew reported.

The phrase "Black Lives Matter" emerged first in 2013 after George Zimmerman was acquitted for the killing of Trayvon Martin. It was recognized more widely during the protests against police brutality in Ferguson, Missouri, after 18-year-old Michael Brown was shot to death by police in 2014.

One of the movement's guiding principles is ending "state-sanctioned violence," which includes killings by police. Recent polling suggests many Americans see this view -- and the recent protests against police brutality -- as legitimate.

A Monmouth University poll released last week found that 78% of Americans said protesters' anger after George Floyd's death was "at least partially justified." And a CBS News/YouGov poll found that 57% of Americans believe police in most communities treat whites better than black people.

Before the nationwide police brutality protests began, the use of the hashtag peaked in summer 2016, when it was mentioned around 500,000 times daily, Pew reported. That same summer saw the deaths of Alton Sterling and Philando Castile, who were both fatally shot by police in Louisiana and Minnesota respectively.

But even then, "Black Lives Matter" wasn't something that most major companies issued statements about or that politicians had painted in the streets.

Milwaukee County suburbs will move to next reopening phase

Charges filed against Cedarburg woman, 22, in crash that killed passenger who was hanging out window