'My 81-year-old dad would have never figured this out:' Inside America's vaccine sign-up process 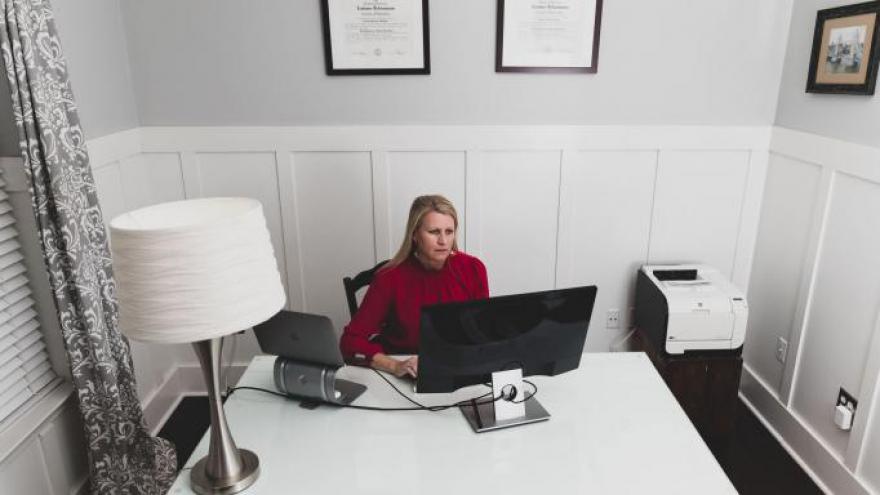 Caroline Brant is helping family members and colleagues sign up for vaccine appointments.

(CNN) -- For Caroline Brant, attempting to get a vaccine appointment for her in-laws in Pennsylvania felt like trying to "win a seat at the big show."

"Except in Pennsylvania, there's no show yet," she told CNN. "Just spinning sites."

The 48-year-old, who lives in Collegeville, is referring to the confusion over websites where those eligible for the vaccine can sign up for a coveted slot to receive one.

At the moment, in most states, those eligible include health care workers and seniors. But many of the nation's 50 million seniors, including Brant's in-laws, have been struggling to figure out how to navigate the various websites that provide information about the vaccine or allow people to sign up.

"My in-laws did not ask for my help but I could tell right away that it was a logistical nightmare," Brant said. "None of them even knew where to start."

That's why Brant, who owns a toy store, offered her assistance. She said she's also helping some of her employees who are seniors, and her own parents, who are based in Arizona.

And she's not the only one -- as the vaccine rollout continues in states nationwide, confusion increases around how to sign up for one. Vaccine distribution plans can differ from state to state, and in some cases, county to county.

As a result, many are stepping up to try and help their loved ones who are eligible for the vaccine, but confused about how to go about it, get their appointments.

Some wait at their computers, hitting refresh

Communication to the public on which phase a state is in, how to find a vaccine and where to go to get the shot is left up to the state, typically the state health department, which may then leave it up to the counties to organize and administer.

However, regardless of location, people nationwide have experienced the same frustration when trying to get an appointment for a loved one: The booking process has proved harder than it should be.

"I'm in the waiting room. My 81-year-old dad would have never been able to figure this out on his own," one person in Minnesota wrote in a tweet. "Our seniors need family to do this for them, and many seniors don't have family to help them."

"Sitting in front of a computer clicking refresh constantly in the hope of being the first to have access to Eventbrite when an event goes live," another person tweeted. "That event? A possible COVID vaccination for my parents. That's right. Florida is running it's vaccine program through Eventbrite."

In the absence of a national or statewide distribution plan, several counties in Florida used Eventbrite, an event scheduling and ticketing site, to distribute their limited number of vaccine doses on a first come, first served basis to eligible groups of people. This includes residents who are 65 and older.

At least three of the counties using Eventbrite for vaccine distribution -- Pasco, Collier and Sarasota -- have recently acknowledged scams on the platform.

Nancy Morrow-Howell, director of the Harvey A. Friedman Center for Aging at Washington University in St. Louis, told CNN Business earlier this month that platforms such as Eventbrite are inaccessible to "the most disadvantaged people."

Will Howell, who is based in Oakland, California, said he's been helping his 75-year-old mother -- who has diabetes -- sign up for a vaccine in Evanston, Illinois. There, he said, the city is using a different internet site to help coordinate vaccine appointments.

"The city is making people fill out SurveyMonkey forms in order to gauge their priority level," Howell told CNN.

The City of Evanston said in a Facebook post January 7 that the SurveyMonkey form is "not a vaccine registration form," but a "vaccination interest form."

Howell, 41, said he filled out the form for his mother after spending hours searching through multiple websites -- including the Chicago Tribune, Twitter and the city of Evanston's website -- to try to find instructions.

"Hopefully it's not going just into the ether," he said of the form, which he submitted Wednesday.

Others succeed in booking appointments but...

Even before the pandemic, 50-year-old Amanda Rykoff said she was "tech support" for her parents, assisting them with their computers, cable box and internet connection.

So when her parents, ages 84 and 78, became eligible for the vaccine in Los Angeles -- where they are based -- Rykoff said she volunteered to help them sign up.

When she first tried to book an appointment for her father, a cancer survivor, the LA County Department of Health website said he wasn't eligible for the vaccine yet and would likely have to wait until May.

Tuesday, however, news came that all LA County residents over the age of 65 were eligible for the vaccine even if they weren't health care workers -- so Rykoff quickly called her parents and went on the county's vaccination website.

"I must have accessed the site before it crashed later in the afternoon," she said. She clicked through a few screens before reaching the one designated for making appointments. She successfully booked one for Thursday at noon, at the Forum's drive-thru site.

"I was fortunate to have no technical issues with the booking website," she said. "I am technologically competent and can work my way around websites, even if they aren't intuitive."

For James Weitz, who is also from Los Angeles, it took weeks of hunting to find and schedule vaccine appointments for his parents, 82-year-old Dolores and 88-year-old Allen. He described the process as "frustrating, chaotic and depressing."

"This is America. We're supposed to do everything well. We win in the Olympics," Weitz said of the ordeal.

Weitz said he and his parents initially tried to schedule appointments at a grocery store, at hospitals and through the Los Angeles County Health department -- but brief openings on websites vanished before they could schedule shots. Other times the websites froze.

"I think there's just not that many vaccines available," Weitz said. "When you see an appointment, it goes just like that."

Others were also successful -- or as they describe it, lucky -- but only after several tries.

"It took multiple attempts because the slot would be gone before we complete the process," said Phoenix resident Ryan Newell, who booked appointments for his parents in Arizona. "It took about four attempts, and I had to register my parents separately."

"We were also not able to edit appointments, so if we had entered something wrong in the registration process we had to start over," he added.

He said his parents, ages 68 and 70, needed some convincing before they let him book the appointments for them. He and his sister, Jennifer Newell Davies, who is in San Diego, eventually succeeded.

"They seemed to have little faith that it would be a viable process and that the state could even execute it, so they seemed to give up before they started," Newell told CNN. "However, I convinced them to sign up to at least give it a try. I did most of the sign up process for them online during my lunch break."

Some public officials have raised concerns over process

The problems are down to local health departments stretched thin after 10 months of the pandemic, plus decades of underinvestment in infrastructure to deal with a mass vaccination effort.

Public officials have raised concerns over the technology and communication issues that many cities face with their vaccine distribution plans.

"I am concerned this signals twin failures of outreach and technology by the City," New York City Comptroller Scott Stringer wrote in a tweet on a Sunday, noting that there were 200 vaccine appointments unfilled for the following week.

Matt Haney, a San Francisco Board of Supervisors member, asked his Twitter followers to voice their complaints about the sign-up process so he could help address them.

"SF DPH has started to schedule people for the vaccine who are 65+ who are in the SF Health Network," he wrote in a January 18 tweet. "Kaiser & and other networks also scheduling appts. Still not enough clarity and answers. Please share w me your experiences and questions, it will help me advocate & improve things."

Unsurprisingly, he received a slew of responses -- with some suggesting the city create a vaccine dashboard that aggregates vaccine distribution, and others just sharing their grievances.

"Seriously the comments I'm getting are raising my blood pressure -- everyone is fighting to get their loved ones an appointment, and most are failing," wrote Dr. Arghavan Salles, a Palo Alto-based Covid-19 disaster relief physician.

In Pennsylvania, Brant echoed similar frustration. She said she's felt the "knowledge flow has been a complete disaster because everyone is wasting tons of time trying to find information, and there's no clear direction on how to make sure you're signed up."

"It's causing a lot of unnecessary stress," she said. "And if we knew we could just sign up, get on a list and be notified when it's our turn, that would be great."