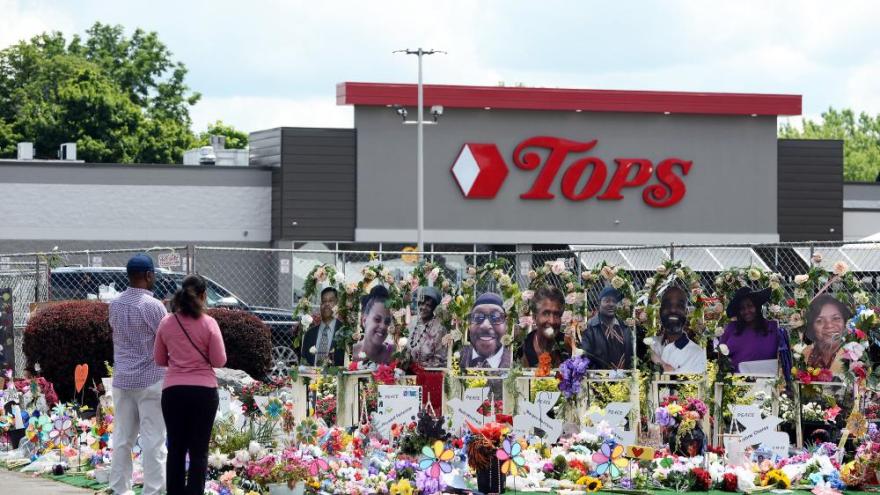 Community members pay their respects at a "Memorial Garden" filled with flowers, photos and mementos outside the Tops Friendly Market on Jefferson Avenue, in Buffalo, as it reopens the store.

(CNN) -- Garnell Whitfield is still suffering the trauma of losing his mother to racist violence at a Buffalo supermarket.

Whitfield said the mass shootings that followed and Republican lawmakers' refusal to support significantly stricter gun laws have made it even harder to cope. He also worries many elected officials and religious institutions have remained silent about the impact of White supremacy.

"You go from being sad and missing your loved one to being very angry," Whitfield said. "It's a lot to take in to know that other people are going through the same thing. It's a lot to know that people are sitting in places of authority and basically giving the green light to this nonsense."

On Friday, Tops Friendly Markets reopened the doors of its Buffalo store two months after Whitfield's 86-year-old mother, Ruth E. Whitfield, and nine others were killed when a White supremacist opened fire there. The supermarket has undergone a complete renovation, with additional safety and security measures in place, as well as the creation of a memorial for the shooting victims inside the store, Tops Friendly Markets said in a news release. New security measures in the supermarket include enhanced video monitoring systems, an emergency evacuation audio/visual alarm system, the installation of additional emergency exits and increased professional security both inside and outside of the store.

Community members say that while the Tops store is sorely needed in the neighborhood, many Buffalo residents are still traumatized by the massacre. Family members and survivors are still grieving. Residents are fearful of another attack. And there is still an uneasiness when neighbors see a White person walking through their majority Black neighborhood of Masten Park. Local activists said they don't expect many people will shop at the store in the first few weeks after it reopens but they hope that apprehension doesn't last. The east side neighborhood is a food desert and residents fought hard to get a grocery store before Tops opened in 2003.

"I think there will be people who don't want to go there and will never go there again," said Garnell Whitfield, who is the former Buffalo fire commissioner. "But convenience and necessity take over and that store will be a viable part of that community."

A dedication ceremony for the store's reopening was held Thursday afternoon and included a community prayer and a moment of silence for the shooting victims.

"This is the day where we declare that hate did not win, that hate was defeated, that hate has no place in East Buffalo or Buffalo or in the great state of New York, and that this community ... drove out the darkness," New York Attorney General Letitia James said. "It is a bright day in Buffalo and I want the residents to know that everything is going to be all right."

Buffalo Mayor Byron Brown said the outpouring of support for the store's reopening is "proof positive that love beats hate."

"We will take this place of tragedy and in the days, the weeks, the months, the years to come, it will be a national and worldwide example of a place of triumph," Brown said.

'Fear that it's going to happen again'

Community activist Liz Bosley said she has talked to a lot of residents, particularly the elderly, who are terrified of going back into the Tops location. Some wish Tops would have demolished the store and rebuilt it so people wouldn't have to relive the devastation, she said.

"There's definitely fear that it's going to happen again," Bosley said. "If they see a White person in the area, their mind starts wandering. People are afraid."

Bosley said residents have been going to a makeshift market that volunteers created after the shooting where free groceries and hot meals are distributed. Others have been taking buses or Uber rides to other areas of the city to grocery shop. Still, Masten Park needs a brick and mortar supermarket, Bosley said.

Bosley is applying for a job at Tops with hopes that residents who see her working there will feel more comfortable shopping at the store, she said.

"I want to give people the courage to know that it's OK to come back and shop at Tops," Bosley said.

Other community leaders are also hoping to persuade residents to shop at the reopened store.

Bishop Perry Davis of New Life Harvest World Ministries in Buffalo said he planned to be at Tops on Friday when it reopened to console the community and comfort anyone who shows up.

Davis said the reopening of the store will open wounds for many in the neighborhood.

"There will be fear of another attack because it's so fresh, it's a fresh situation," Davis said. "We are talking about 10 souls, 10 people that died just a couple months ago, so that's definitely going to stay in the forefront of everyone's mind."

But Davis is encouraging the community to show its strength by patronizing Tops, which he says is a necessity for the neighborhood.

"We are not going to just bow down and kowtow to fear," Davis said.

'A lot of us are still having nightmares'

Some survivors of the shooting say they have especially struggled with the idea of returning to the store.

Tops employee Fragrance Harris Stanfield was working at the store the day the shooting happened but was able to escape.

Stanfield told CNN's Athena Jones that she visited the store on Thursday but still isn't ready to go back to work.

Stanfield said the visit was emotional and her coworkers had to console her.

"Everyone was with me walking and some of my really close coworkers were walking with me and just helping me to breathe through it, talking me through it," Stanfield said. "And then I had to take a step back because I was just overwhelmed and began to cry."

Despite her emotions, Stanfield said she supports the store reopening to the community.

Tops produce manager Rose Marie Wysocki, who also survived the massacre, said the renovated store was "beautiful" but she had a difficult time walking through the door.

"It's going to take us a long time to get over this. It really is," Wysocki said. "We're living, breathing human beings. A lot of us are still having nightmares. A lot of us aren't sleeping well at night."

A son channels his grief

Mark Talley, who lost his mother, Geraldine Talley, in the attack, agreed that Buffalo's east side needs to remain strong and keep Tops open.

"I originally didn't want the store to reopen," Talley said. "But at the same time I don't want the city and my community to feel that we should succumb to defeat."

Talley said he is still angry that his mother -- whom he described as a kind woman who loved to make banana pudding, red velvet cake and sweet potato pie -- was killed by a White supremacist.

But Talley said he refuses to let the tragedy keep him down. He channels his grief by helping distribute groceries to residents at the makeshift marketplace. Talley said people have come in droves to receive items each week from the market, proving that it filled a void in the community while Tops was closed.

Talley said giving back has helped him cope.

"It's just my form of grieving, just something to help," Talley said. "Something that will keep me numb from having to think about the incident, trying not to get lost in my thoughts."