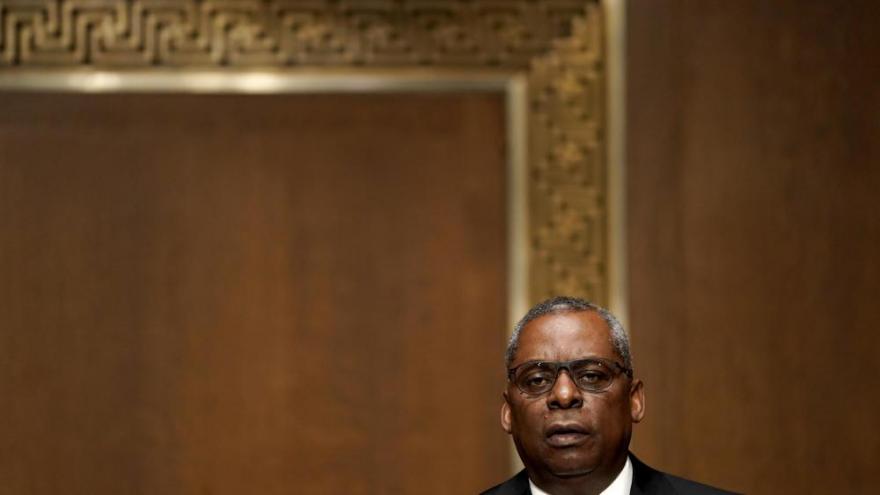 The Department of Defense is seeking a sharper definition of prohibited extremist activity, among other step Defense Secretary Lloyd Austin announced. Austin is shown at his confirmation hearing before the Senate Armed Services Committee at the U.S. Capitol on January 19, 2021 in Washington, DC.

(CNN) -- The Department of Defense is seeking a sharper definition of prohibited extremist activity, among other steps, as it pushes forward with a fight against extremist ideology within the ranks, the Pentagon announced Friday.

The steps include a review of current military policy that allows a service member to belong to an extremist organization as long as they don't advocate for the group.

The newly announced "critical initial steps" come after the military completed its service-wide discussions about extremism, including a review of the oath of service and current rules about supremacist and extremist ideologies. Defense Secretary Lloyd Austin gave the services 60 days to conduct these discussions, which ended this week.

Austin has consistently stressed that he believes the number of extremists within the military is low, but even a very small population can affect the cohesion and unity of the military. Part of the initial steps was the commissioning of a study on extremism to get a better handle on the size and scope of the problem.

"The number ought to be zero, given the fact that you take an oath to defend the Constitution of the United States," chief Pentagon spokesman John Kirby said at a news briefing on Friday, "but even though the number is small, it can have a corrosive, outsized effect."

Extremism within the ranks has become one of Austin's highest priorities following the January 6 US Capitol riots. According to a CNN analysis, 33 service members or veterans have been charged as a result of the riots.

Austin instructed the services to improve their screening of those entering the military and better train those leaving it. He called for updated and standardized screening questionnaires to detect current or previous extremist activities, while also instructing the services to better train people leaving the military on extremist groups who may seek to recruit them. Extremist groups recruit veterans because of their weapons expertise, organizational skills and strategic knowledge.

At the same time, a new Countering Extremism Working Group will look to see if there is a need to update or amend the Uniform Code of Military Justice, find ways to work better with civilian law enforcement and determine whether algorithms can help better screen social media posts for indicators of extremist ideologies.

The service secretaries conveyed to Austin a need for more information about the meaning of extremism and the specific definition of extremist ideology, Kirby said.

"Extremism and generally hateful ideologies have always existed for the entirety of my career. It's just with everything that's going on in the public, this was definitely a conversation that needed to go across all spectrums and all levels of ranks," Army Spec. Greg Sanders told CNN from Fort Bragg in North Carolina. Sanders, who has been in the military for 18 years, sees the effort to combat extremism as an ongoing process with no quick fix available.

"We've identified that there's a problem, and even though it's not as prevalent as what people may think, we know the problem exists," Sanders said. "Let's continue to be proactive."

Austin's time at Fort Bragg in the mid-'90s helped shape his view on extremism, and he has spoken of it often when he addresses the seriousness of the issue. Austin was a lieutenant colonel with the 82nd Airborne Division at Fort Bragg in 1995 when two neo-Nazi skinheads from the elite unit murdered a Black man and woman in a racially charged killing. The signs were there all along, he said at his confirmation hearing, but no one knew what to look for.

The discussions about extremism that Austin ordered sought to address this very problem.

"It was good to go ahead and recognize what a problem would look like so we never have that issue," Staff Sgt. Cara Chapman told CNN from Fort Bragg. "We have to be prepared to just make sure that doesn't come into the Army, because we don't back up anything that goes against our Army values."