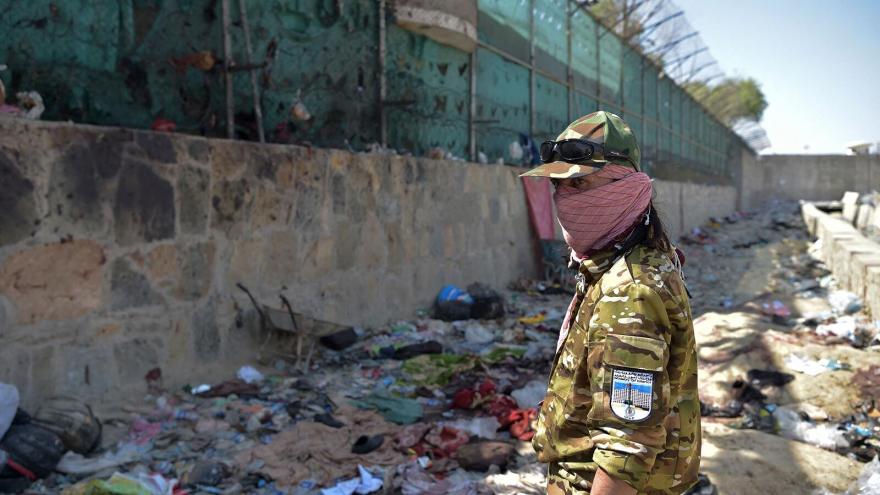 Pentagon says the deadly Afghan airport attack was carried out by a single suicide bomber. Pictured is the Kabul airport on August 27, 2021, a day after the attack.

(CNN) -- The top US general in the Middle East said a Pentagon investigation into the August 2021 bombing outside the Kabul airport that killed 13 US service members was the result of a single bomber, and it was not the "complex" attack that US officials initially described.

The bomber was able to approach Kabul International Airport's Abbey Gate, where he detonated an explosive device that killed the US troops and about 170 Afghans, without being stopped because Afghans had begun using alternate routes to the gate due to the difficulty of getting through Taliban checkpoints.

Gen. Frank McKenzie, the head of US Central Command, spoke at a Pentagon briefing Friday to unveil the findings of the US military investigation into the deadly bombing at the Abbey Gate entrance to the airport, where 11 Marines, 1 Army soldier and 1 Navy sailor -- along with approximately 170 Afghans -- were killed.

"The investigation found that a single, explosive device killed at least 170 Afghan civilians and 13 US service members by explosively directing ball bearings through a packed crowd and into our men and women at Abbey gate," McKenzie said ahead of a briefing from the investigators.

McKenzie acknowledged the conclusion was different from what the Pentagon initially believed.

"At the time, the best information we had in the immediate aftermath of the attack indicated that it was a complex attack by both a suicide bomber and ISIS-K gunmen," he said. "We now know that the explosively-fired ball bearings caused wounds that looked like gunshots, and when combined with a small number of warning shots that led many to assume that a complex attack had occurred."

The investigation turned up no evidence that any Americans or Afghans were hit or killed by gunfire, McKenzie said.

Investigators said medical examiners initially believed they were treating gunshot wounds of those wounded, but they later determined they were ball bearings from the bomb.

Investigators spoke with more than 100 people for the investigation, they said, but they acknowledged they did not interview any Afghans as part of the US probe.

The briefing Friday also included video of the bombing itself and several minutes of drone footage taken after the blast had occurred.

The attack came as US and foreign troops were conducting chaotic evacuation efforts to help get Afghans and foreigners out of the country before US troops completed their withdrawal from the country on August 31. ISIS in Khorasan, known as ISIS-K, said an ISIS militant carried out the attack.

Investigators told reporters they determined it was "highly likely" that the assailant behind the deadly attack used an alternate route to reach Abbey Gate to avoid Taliban checkpoints, and as a result the bomber did not to have to show ID before getting close enough to US service members to launch the attack.

There was a Taliban checkpoint at one end of the Abbey Gate entrance to the airport, which was the only available entry point for those trying to evacuate the country on August 26, the day of the attack. Other gates had been shut down due to threats and vulnerabilities.

While the Taliban worked collaboratively with US troops as the evacuation proceeded, they often turned away or beat Afghans trying to flee. As a result, Afghans sought out alternate routes to avoid Taliban checkpoints, and there were established routes to the other side of the Abbey Gate via the canal where the bomber detonated his device.

Lt. Col. John Naughton, one of the investigators, said that maps would be sent to potential evacuees "and would highlight the route they could use to bypass checkpoints and gain access to Abbey Gate."

The potential evacuees would arrive at a parking lot area via the alternate routes, and would have "a few options for getting close to the outer gate area," Naughton said, noting that as people became more desperate, they began to use the sewage canal as an avenue to approach the airport.

Investigators said that the situation on the ground at Abbey Gate changed dramatically in the days leading up to the bombing. The canal also became more and more crowded as the other gates closed and the planned US withdrawal date of August 31 approached.

Friday's briefing included video footage of the blast itself. The video shot by a Marine shows the bomber some distance away on the other side of the canal in the background. A flash of light can be seen as the two Marines in the foreground of the video turn toward the bombing and then duck, as the video jolts downward.

Three minutes after the bombing, a drone pilot began capturing footage of what was transpiring at the Abbey Gate. The footage shows Marines rushing toward the gate from inside the airport, as well as a number of bodies on the ground.

While the investigation did not find evidence of people injured from gunfire, investigators said warning shots were fired from several locations in the aftermath of the blast from US and British service members.

Shots were fired from three locations near the bombing site shortly after the attack. British forces fired 25-to-30 rounds as warning shots to try to disperse the crowd from one location, while a Marine fired four rounds over the head of an individual who appeared to be observing the bombing site.

Separately, a team of Marines who observed the gunfire in front of them saw a man with an AK-47 on top of a building. The Marines believed he "exhibited hostile intent" equipped with a weapon and fired toward him, though they did not appear to hit the man.

Marine Col. CJ Douglas, one of the investigators, said that the gunfire within Abbey Gate did not result in any injuries.

Initially, however, US officials described the bombing as a "complex" attack at the airport, saying that two bombs went off along with an exchange of gunfire in the aftermath.

Douglas said there were several reasons for the incorrect belief it was a complex attack, which included "the fog of war and disorientation due to blast effects."

The ball bearings from the bombing also hit tear-gas canisters that Marines were wearing, releasing the gas. "The blast created instant chaos and sensory overload," Douglas said. "Marines were simultaneously enduring tear gas and blast effects while responding to a mass casualty situation."

The warning shots also created an "echo effect" that caused some of those on the ground to think there was a firefight.

US Marines initially considered the possibility that the Taliban could be responsible for the bombing, but they quickly determined that the Taliban were neither involved nor threatening US personnel, Douglas said.

More than 100 interviewed in investigation

McKenzie said that the Pentagon investigation was undertaken to explain to family members of those killed what happened, and included testimony from more than 100 people.

McKenzie said Friday that the investigation into the bombing "found that military leadership on the ground was appropriately engaged on force protection measures throughout the operation of Abbey Gate and that the medical services that were available and that were ready saved every life they possibly could through heroic efforts."

"This was a terrible attack that resulted in tragic outcomes and a horrific loss of life," he said.

Army Brig. Gen. Lance Curtis said that military leaders on the ground followed proper procedures when there was a threat on the ground. Asked if the bombing itself was preventable, Curtis said the investigation determined that it was not.

"Based on our investigation at the tactical level, this was not preventable, and the leaders on the ground followed the proper measures," Curtis said. "Anytime there was an imminent threat warning, they followed the proper procedures. They lowered their profile, they sought cover, and at times, they even ceased operations at the gate."

Asked whether the identification of the ISIS-K bomber was known before the bombing occurred, Curtis said that was outside the scope of the military probe and that investigation was being handled by the FBI.