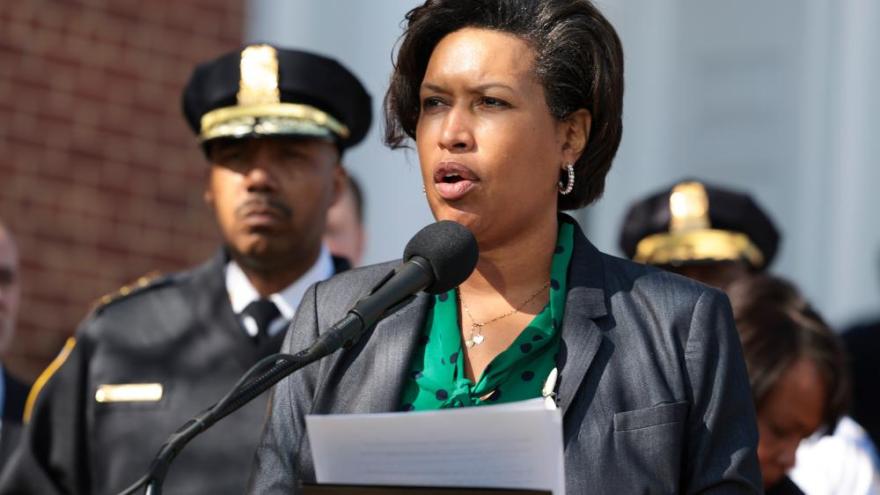 Washington, DC Mayor Muriel Bowser (R) and Washington Metropolitan Police Chief Robert Contee III speak at a press conference on March 15. The Pentagon rejected a second request from the mayor of Washington, DC, to help deal with migrants arriving in the city by bus from Texas and Arizona, according to a defense official.

(CNN) -- The Pentagon rejected a second request from the mayor of Washington, DC, to help deal with migrants arriving in the city by bus from Texas and Arizona, according to a defense official.

The Pentagon, according to a copy of the rejection letter reviewed by CNN, said it "would not be appropriate" to use the DC National Guard and that the Defense Department "cannot fulfill your request."

DC Mayor Muriel Bowser reacted to the rejection in a statement on Twitter, saying, "We are going to move forward with our planning to ensure that when people are coming through DC on their way to their final destination that we have a humane setting for them."

Bowser had initially requested DC National Guard support in late-July when she said the city had reached a "tipping point" with the number of migrants. The governors of Texas and Arizona began busing migrants from the southern border to the capital starting in April in protest of President Joe Biden's immigration policy.

The Pentagon rejected the first request in early August, saying it would hurt the readiness of the DC National Guard and that the city had received grant funding through FEMA's Emergency Food and Shelter Program.

But one week after that denial, Bowser resubmitted her request for National Guard support, trying to address some of the concerns raised by the Pentagon. Bowser said the request was for a period of 90 days instead of an open-ended request and that it would be limited to logistical support for sites such as "facility management, feeding, sanitation, and ground support."

The mayor reiterated the need for a government facility such as the DC Armory to be utilized as a "respite center" where migrants can stay until moving on. Her letter said that the secretary has "failed to demonstrate an understanding of the urgent staffing and logistical challenges that have led me to make this serious request of our National Guard resources."

The DC National Guard, Bowser said, was "uniquely resourced" to provide logistical support to the city.

Instead of approving the request, the Pentagon reiterated its previous stance and more thoroughly explained its reasons for the rejection.

The Pentagon said the use of the DC National Guard would impact the readiness of the unit and that the DC Armory was not an appropriate place to house migrants even temporarily, since it is not air conditioned and would have to go through "a substantial remediation for a number of issues," according to the copy of the letter. The Defense Department also pointed to the civilian agencies and NGOs assisting with the migrants.

On Monday, the mayor said DC would continue working with other federal agencies and non-government organizations as part of its plan to deal with incoming migrants and reiterated her call for DC to be granted statehood, which she says would have given her the authority to call in the National Guard without Pentagon approval.