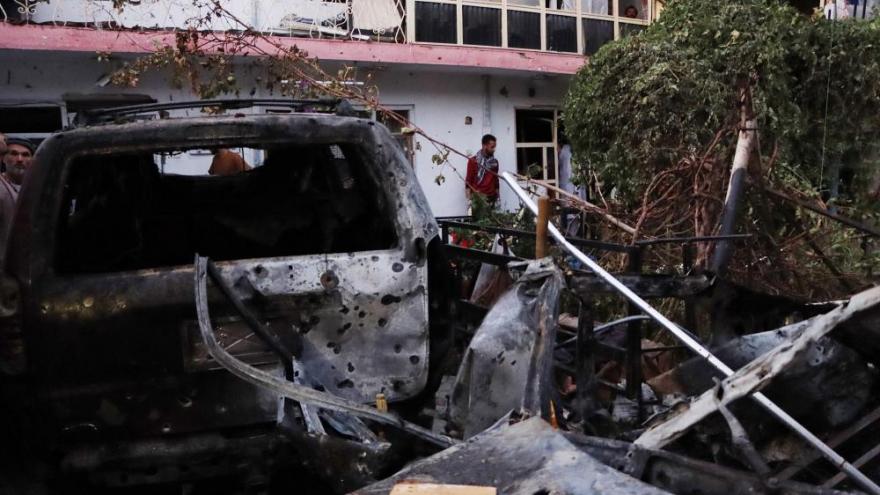 A view of the damaged caused at the scene of an attack near the Hamid Karzai International airport, in Kabul, Afghanistan, August 29. Defense Secretary Lloyd Austin has decided that no US military personnel will be punished over the August drone strike in Kabul that killed 10 civilians, including seven children.

(CNN) -- Defense Secretary Lloyd Austin has decided that no US military personnel will be punished over the August drone strike in Kabul that killed 10 civilians, including seven children.

Following a review of the strike, Austin instructed the heads of Central Command and Special Operations Command to make recommendations to improve Defense Department policies and procedures. But their recommendations did not include holding anyone accountable or punishing anyone involved in the strike, Pentagon press secretary John Kirby said Monday.

The decision means there will be no disciplinary action taken over the strike, which Pentagon officials initially defended before going on to call it a "tragic mistake" as a result of "execution errors."

Two weeks after the strike, and only after CNN and other media outlets raised serious questions about the military's official account, the Pentagon acknowledged the operation was a mistake. Gen. Frank McKenzie, the commander of US Central Command, said the military had tracked the wrong vehicle for hours as it built up what it thought was the evidence of dangerous activity needed to conduct a strike.

On August 26, three days before the botched strike, an ISIS-K suicide bomber carried out a bombing at Abbey Gate, one of the primary entrances to Kabul's international airport, killing 13 US service members and many more Afghans. The threat of another attack and the final days of the US military withdrawal from Afghanistan compounded the pressure that led up to the drone strike.

But there was no imminent ISIS-K threat neutralized in the strike. Instead, the military killed Zamarai Ahmadi, an Afghan who worked for Nutrition and Education International, a non-profit focusing on combatting malnutrition, and was in the process of applying for a visa to relocate his family to the United States. The strike killed nine others as well, including members of Ahmadi's family.

"This decision is shocking. How can our military wrongly take the lives of 10 precious Afghan people, and hold no one accountable in any way? I've been beseeching the US government to evacuate directly-impacted family members and NEI employees for months because their security situation is so dire," he said in a statement. "When the Pentagon absolves itself of accountability, it sends a dangerous and misleading message that its actions were somehow justified, increasing security risks and making evacuation even more urgent."

The New York Times was first to report the defense secretary's decision.

A comprehensive review of the strike ordered by Austin found there was no violation of law, including the law of war, in the mistaken airstrike.

Said would not address the question of accountability, leaving that up to commanders.

"I didn't eliminate the possibility of accountability. That is commander business," Said remarked.

Austin's decision not to punish those involved in the strike comes one month after he committed to "adjusting" Defense Department policies and procedures to better protect civilians.

At the time, Austin said he believed "leaders in this department should be held to account for high standards of conduct and leadership."

"And for my part as secretary of Defense, I have every intent to uphold that standard," Austin added.

When asked why Austin had not pushed harder for accountability in the case of the August 29 strike, Kirby said, "In this particular case, there was not a strong enough case to be made for personal accountability. But that doesn't mean that the department is turning a blind eye to a high standard of conduct and leadership."

In November Austin ordered a review of a March 2019 strike in Baghouz, Syria, that the Pentagon only recently acknowledged had killed civilians. The 90-day review will be led by Gen. Michael Garrett, the commander of US Army Forces Command.

The review will cover examine civilian casualties as a result of the strike, which targeted ISIS fighters, as well as compliance with the law of war and what accountability measures, if any, would be appropriate.