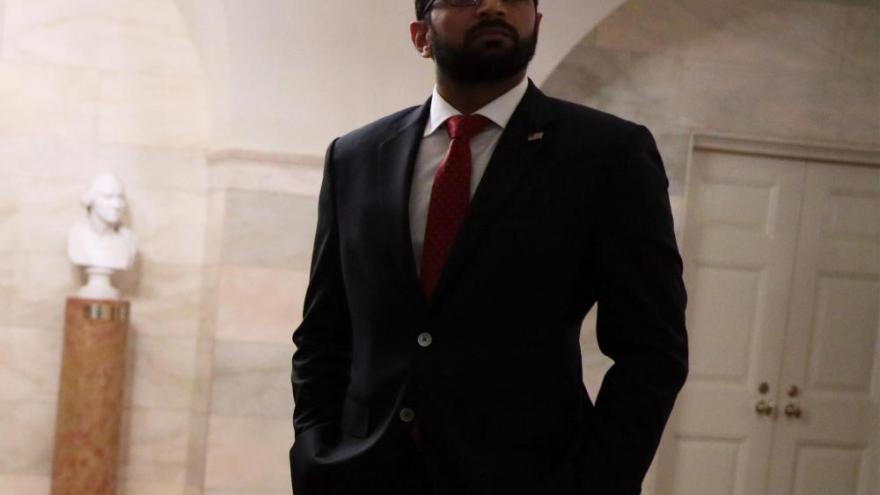 The Trump administration prevented President-elect Joe Biden's transition team from meeting with its counterparts at Pentagon intelligence agencies this week. Kashyap Patel is in charge of the Pentagon transition effort and will oversee coordination with the incoming Biden-Harris administration.

(CNN) -- The Trump administration prevented President-elect Joe Biden's transition team from meeting with its counterparts at Pentagon intelligence agencies this week, according to a former senior intelligence official familiar with intelligence transition discussions.

The slowdown means the Biden team has not yet been able to meet with officials from the military intelligence agencies within the Defense Department -- including the Defense Intelligence Agency and the National Security Agency -- even as all other meetings by Biden review teams appear to be happening smoothly now after weeks of delay.

The Pentagon denies any effort to stymie the President-elect's team. A senior defense official told CNN that briefings had taken place on Friday for transition officials on military matters, including senior-level policy and international security issues, but not on intelligence.

The Washington Post first reported on the Biden team's problems with the Defense Department transition office, which is led by a Trump loyalist connected to efforts to spread conspiracy theories about the President-elect.

The delays come even as the General Services Administration gave a green light on November 23 for officials at federal agencies across the government to meet with the President-elect's Agency Review Teams -- essential to ensuring a smooth transfer of power.

Last week, arrangements were made for Biden's Agency Review Team to meet with the various defense intelligence agencies this week, the former intelligence official said.

But early in the week, word came from the Pentagon that the Biden team would have no engagement with defense intelligence agencies until it had submitted questions in advance and listed the names of the people with whom it wanted to interact.

At that point, the Biden team's requests would be reviewed by the Defense Department's general counsel and Kash Patel, the Trump loyalist appointed to lead the Pentagon's transition last month amid President Donald Trump's purge of civilian leadership at the department.

Sue Gough, a Defense Department spokesperson, denied there has been any issue with the Biden teams' ability to meet with intelligence officials at the Pentagon.

"The DOD Agency Review Team has not been denied any access," Gough said in a statement. "We continue to work with the DOD ART to schedule all requested interviews, briefings and updates."

In a statement on Saturday, acting Secretary of Defense Christopher Miller said the department was "fully cooperating with the Biden transition team, placing national security and the protection of the American people at the forefront of any and all discussions."

Multiple Pentagon officials blamed the meetings being delayed on the Biden transition organization, saying the members of its intelligence transition team reached out directly to the Pentagon's intelligence agencies, which they said was a violation of the transition arrangement.

Biden transition team spokesman Ned Price declined to comment. The National Security Agency and the Office of the Director of National Intelligence didn't immediately respond to a request for comment.

A defense official said the Biden transition team for intelligence had "made direct coordination with DOD intelligence agencies for interviews, briefings and site visits," and the Pentagon had then asked that it reach out to Patel for all of its requests for interviews and site visits "per the statute, GSA guidance" and the memorandum of understanding between the White House and the President-elect.

"In case that isn't clear," the defense official said, "the schedule change/delay happened because the (Biden team) didn't reach out to DOD before scheduling a meeting with DOD agencies, PER THE GUIDANCE and MOU. They weren't denied, they just had to follow the proper procedure."

Gough said in her statement that visits were "tentatively scheduled for early next week," and that Patel and the acting under secretary of defense for intelligence and security are working closely with others "and are completing coordination" for the Biden teams to visit.

The Defense Department's stand on the issue has angered Director of National Intelligence John Ratcliffe, according to the former intelligence official, who said Ratcliffe intended to take the issue to the White House.

The Office of the Director of National Intelligence was created to coordinate efforts among the intelligence agencies across the administration.

"Ratcliffe was hot. He saw it as insubordination," the former intelligence official said. "It was his authority as DNI to set the stage for and processes of the transition."

Vince Stewart, a former head of the Defense Intelligence Agency and former deputy director of US Cyber Command who now co-leads Biden's intelligence transition team, visited the Office of the Director of National Intelligence this week to lay the groundwork for a visit by Biden's pick to replace Ratcliffe, Avril Haines.

Trump appointed Patel and Ezra Cohen-Watnick, the acting under secretary of defense for intelligence and security, to their posts as part of a slew of major changes at the Pentagon, where he has jettisoned much of the civilian leadership in recent weeks, replacing them with political loyalists as his administration winds to a close.

Cohen-Watnick gained notoriety in March 2017 for his alleged involvement in providing intelligence materials to then-House Intelligence Chairman Devin Nunes, a California Republican who went on to claim that US intelligence officials improperly surveilled Trump associates.

Since firing Defense Secretary Mark Esper by tweet November 9, the President has ousted at least three other top officials and replaced them with perceived loyalists. Trump has also replaced the members on two advisory boards, installing his former campaign manager on one of them.

This story has been updated to include a statement from acting Secretary of Defense Christopher Miller and additional reporting.