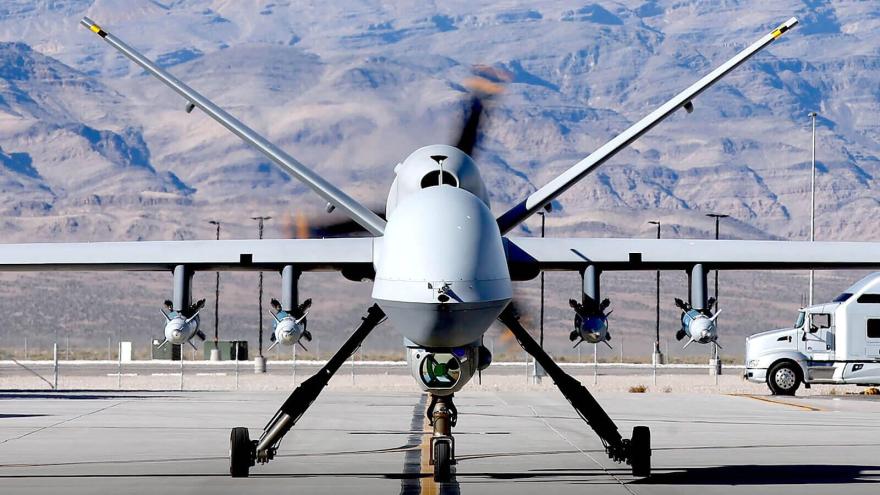 The Pentagon announced a new plan of action which it says will help reduce the number of civilians killed and injured by US military operations, particularly drone strikes, and better deal with the aftermath of such incidents.

(CNN) -- The Pentagon announced a new plan of action Thursday which it says will help reduce the number of civilians killed and injured by US military operations, particularly drone strikes, and better deal with the aftermath of such incidents.

The US military has been criticized for years for killing civilians in drone strikes but came under increased scrutiny after the military conducted a botched strike during the chaotic withdrawal from Afghanistan last August that killed 10 civilians, seven of them children.

The department also faced criticism over a 2019 airstrike in Syria that killed multiple civilians. The military acknowledged the deaths in that strike in November 2021, after the New York Times reported them. The department ultimately held no one accountable for the 2019 strike.

In response to these criticisms, in January Secretary of Defense Lloyd Austin ordered a 90-day review of the military's handling of civilian casualty incidents and a subsequent 90-day implementation period to make changes to how the military handles them.

The "Civilian Harm Mitigation and Response Action Plan" announced Thursday will build a framework that will put people who are trained and have an understanding of civilian harm issues throughout the military, both in combatant commands and at more senior levels of the Defense Department. Those individuals, who will work for the Civilian Protection Center of Excellence, established and created by the new plan, will be able to give input on how certain military actions and decisions will impact civilians, Pentagon Spokesman Brigadier General Pat Ryder told reporters during a briefing on Thursday.

The Center of Excellence will have a staff of about 30. Approximately 150 will work at the combatant commands and their components.

"So, the Center of Excellence will be sort of the hub that will provide expertise at a centralized location, but then that will be dispersed throughout the Department of Defense at the co-com level, at the component level," Ryder said.

The plan will also ensure that better civilian harm mitigation and response practices are incorporated into Department of Defense and US military doctrine, "into instructions, into operational planning as a factor, that will eventually inculcate itself into the force," Ryder added.

This plan is meant to be implemented throughout all parts of the US military, both in battlefields and combatant commands across the globe and in other kinds of warfare, like cyberspace, a senior defense official told reporters Thursday.

"It's meant to be across all domains that the Department of Defense is engaged in," the official said.

Yager has been working on civilian casualty issues for 15 years. This is the largest change in policy she's seen from the Pentagon in all of her time working on the issue, she told CNN.

For Yager, the establishment of the Center for Excellence with dedicated staff working on the issue, the implementation of data collection processes on civilian casualty and harm matters within the department and the change in policy from assuming there was no civilian harm caused as a result of US military actions to assuming that more likely than not civilian harm occurred are all significant changes.

Now, she said, it comes down to implementing the changes outlined in the plan.

"Secretary Austin made a very big difference by saying we're going to address this issue," Yager said. "The next president could come in and say this is not an issue we want to prioritize. So, it's really important to cement not only these positions and the staffing and the processes, but to make sure that the principals and values behind doing this are deeply embedded in the Pentagon."

However, the plan does not address past instances of civilian harm or plan to do any past reviews of instances that have already occurred, Yager said.

"We've been hoping that the Pentagon will look backwards at the past 20 years and say, ' What went wrong? Let's look into some cases.' There are countless victims who were hoping for that," she said. "This plan doesn't have that."

Aside from not looking backward, Yager feels the plan addresses many of the things nonprofits were hoping for. While it doesn't capture everything, Yager said that "it does a lot."

The plan would establish policies and procedures for how to deal with civilian harm incidents, like the botched drone strike the US conducted in Kabul that killed ten civilians last August. Surviving family members of those killed in the strike were promised help from the US government in relocating outside of Afghanistan, but the department has not provided updates on if the family was able to be relocated or if ex parte payments were made for their losses.

"I think how we would assist in those cases; the plan lays out a number of additional and more tailorable options," the official said, speaking of that case. "Obviously moving individuals out of Afghanistan after the Taliban took over is a degree of complexity that requires a lot of tailorable options, so I think we are very much educated by that experience to look at what additional tools we might need besides some of what has traditionally been in the commander's toolbox."

Austin also designated the Secretary of the Army to be the "joint proponent" of implementing the plan, his memo notes. This means the US Army will be heavily involved in creating the infrastructure and executing the plan's directions, the senior defense official said.

"We envision working with the army now as a joint proponent to actually have this up and operating at initial capacity pretty quickly here even as it may take one or two fiscal years to actually build it out to its full operating capacity," the official said.