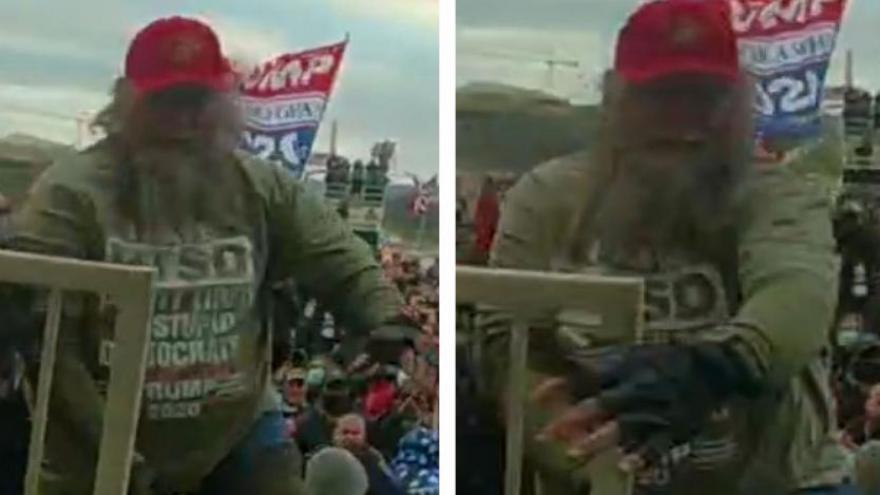 Prosecutors, in a court document, identified the man in this police bodycam screenshot as Michael John Lopatic, of Lancaster County, Pennsylvania.

(CNN) -- Federal prosecutors say that during the Capitol riot, Michael John Lopatic Sr. brutally assaulted a police officer, stole and destroyed another officer's bodycam, and that threatening messages posted on social media about elected leaders in Washington show that his actions "were not spontaneous."

The criminal complaint and FBI affidavit filed against Lopatic remain under seal, but a motion for pretrial detention is shedding light on the government's case against him.

According to the motion, an officer with the Washington DC Metropolitan Police Department (MPD) was trying to rescue another officer from rioters outside the Capitol when Lopatic "emerged from the crowd, climbed over a handrail, and charged" at the officer.

In describing the assault, which was caught on police bodycam video, prosecutors say that Lopatic, "assaulted (the officer) by continuously punching him in the head," and that, "at one point, the defendant grabbed (the officer) by the head and appeared to hit him with an uppercut."

Prosecutors also said that after the alleged assault, Lopatic was seen stealing "the body worn camera of another MPD officer and later destroyed it." In stealing the bodycam, prosecutors said that Lopatic had to break through a "human shield" of "protesters trying to protect (the officer) from the violent mob."

Lopatic told FBI agents that he stole the bodycam and got rid of it while traveling back home from the riot, according to the motion.

In the months and weeks leading up to the riot, prosecutors also said that Lopatic posted, "threatening messages about elected leaders in Washington." Lopatic allegedly posted a number of photos of the birds he shot while hunting, writing in the captions that he'd named them after Democratic politicians.

"I got a double today," Lopatic allegedly wrote, according to a screenshot in the motion. "Two shots, two kills. Both head shots. I got a rooster and a hen. I named them Joe and Kamala."

They also say he wrote on January 1, advocating for others to "ASSEMBLE ON THE CAPITAL JANUARY 6TH, 2021. UNITED WE STAND, GO FORTH AND WE FIGHT."

CNN reached out to Lopatic's lawyer who declined to comment on the charges. Court records show that a federal judge granted the prosecutor's motion for the pretrial detention of Lopatic.