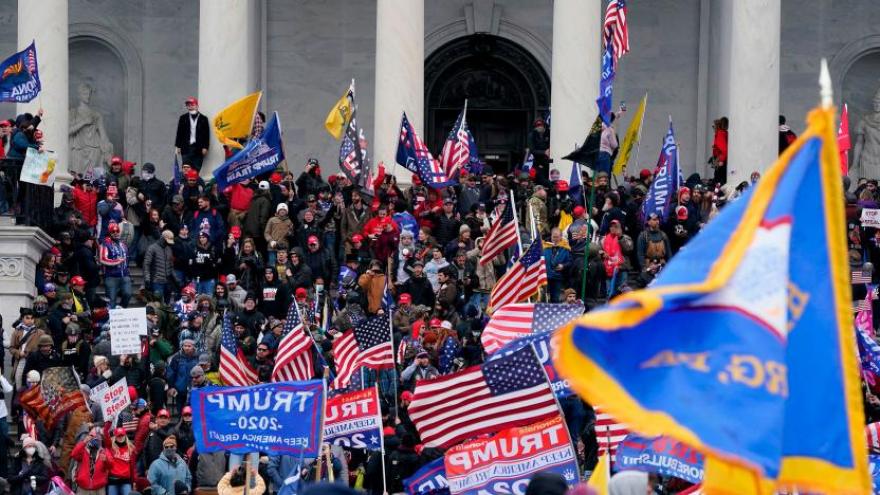 A Pennsylvania police officer is facing criminal charges after posting a video of himself fighting with other officers during the US Capitol insurrection. Pro-Trump supporters stormed the US Capitol on January 6 in Washington, DC.

(CNN) -- A Pennsylvania police officer is facing criminal charges after posting a video of himself fighting with other officers during the US Capitol insurrection.

Federal prosecutors said video footage shows Joseph Fischer, 55, running at a police line outside the Capitol and yelling, "Charge!" A patrolman with the North Cornwall Township Police Department, Fisher allegedly yelled "motherf---ers" as he clashed with officers on January 6.

During the scuffle, Fischer allegedly tried to help an officer who fell down, and said, "I am a cop, I am a cop," according to police body camera footage described by prosecutors in court filings.

One day after the attack, Fischer allegedly sent a private message to an associate saying, "I may need a job" because "(w)ord got out that I was at the rally..lol." In the messages, Fischer said he was confronted by his police chief but told him he had "no regrets and give zero sh--s."

"The FBI may arrest me ..lol," Fischer told the associate, according to court documents.

Fischer has been charged with four federal crimes: obstruction of law enforcement, unlawful entry into a restricted building, obstructing Congress and violent conduct in the Capitol.

A lawyer for Fischer wasn't listed in his court docket as of Friday evening.

Several other members of law enforcement have previously been charged in connection with the insurrection. US Capitol Police announced this week that six of its officers were suspended with pay and 29 others were placed under investigation for their actions at the riot.

At least 230 people have been charged by the Justice Department in the Capitol attack.