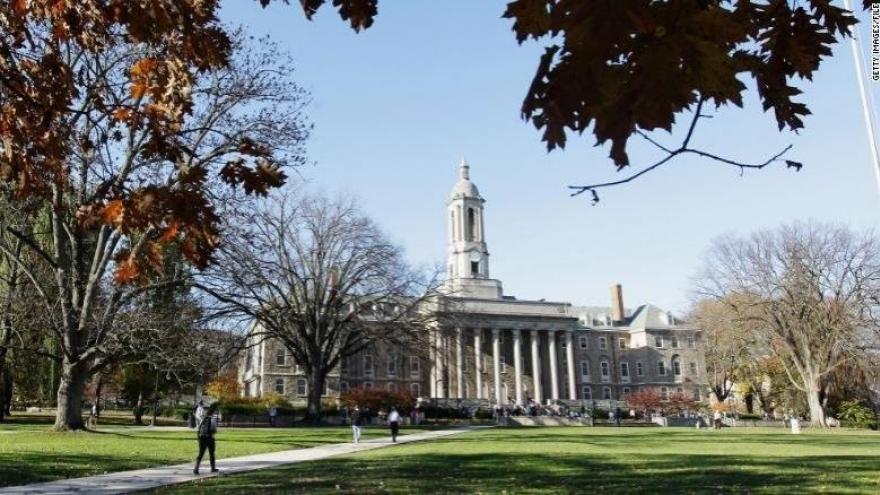 Penn State University is investigating the death of a 17-year-old non-student at an off-campus house.

(CNN) -- Penn State University announced on Tuesday the interim suspension of a fraternity after a 17-year-old died last weekend at an off-campus house.

State College Police responded to a medical emergency Saturday evening at about 9:30 p.m. at an off-campus residence where a 17-year-old male was unconscious and was experiencing shallow breathing, police said in a statement. He was pronounced dead at the scene, the statement said.

Centre County Coroner Scott Sayers identified the teen as John Schoenig. The cause of his death is pending toxicology, Sayers said.

His family referred to him as "Jack" in a statement released Thursday through attorney Catherine Doyle.

"Jack was a beloved son, brother, grandson, nephew, cousin and friend. We are devastated by his passing. We thank everyone for the outpouring of love and support that we have received," the family said.

The off-campus house was allegedly occupied by members of the Chi Phi fraternity but was not the fraternity's official house, Penn State said,

The Alpha Delta Chapter of the fraternity has been suspended until more information is known, the university said. State College Police and the University's Office of Student Conduct are investigating.

"The interim suspension means the fraternity loses all privileges as a recognized student organization pending the outcome of the investigations," Penn State said in a release.

Schoenig was visiting the area and was not a Penn State student, according to the university.

"The Chi Phi Fraternity prayers are with this young man's family and friends during this incredibly difficult time," said Michael Azarian, executive director of the Chi Phi Fraternity. "While the incident at an off-campus residence was not part of fraternity activities, we will monitor the investigation by the university and local officials."

An obituary posted on the Quinn Funeral Home website remembered John "Jack" Schoenig as passionate about ice hockey and "with a presence larger than life."

Alexander Luddy, Schoenig's hockey coach at Cathedral Preparatory School, told CNN that the senior was a leader on the team with a "contagious personality."

"Jack was loved by his friends, his family, and his teammates and he will be missed dearly," Luddy said.

The death comes more than two years after 19-year-old Timothy Piazza, a sophomore at Penn State, died during a night of pledging at the Beta Theta Pi fraternity. The death led to charges against a number of fraternity members and jail time for three people.