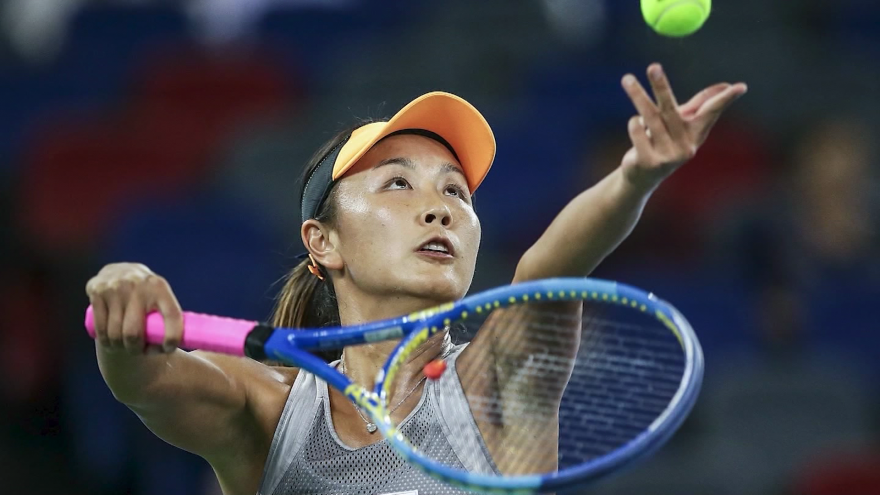 (CNN) -- China is facing pressure from the United Nations over Chinese tennis star Peng Shuai's whereabouts as the organization called for an investigation into her allegations of sexual assault.

Peng, who is one of China's most recognizable sports stars, has not been seen in public since she accused former Vice Premier Zhang Gaoli of coercing her into sex at his home, according to screenshots of a since-deleted social media post dated November 2.

"What we would say is that it would be important to have proof of her whereabouts and well being, and we would urge that there be an investigation with full transparency into her allegations of sexual assault," Liz Throssell, the spokesperson of the UN Human Rights office, told reporters in Geneva on Friday.

"According to available information, the former world doubles No. 1 hasn't been heard from publicly since she alleged on social media that she was sexually assaulted. We would stress that it is important to know where she is and know her state, know about her wellbeing," Throssell said.

The head of the Women's Tennis Association (WTA) Steve Simon has said he is willing to lose hundreds of millions of dollars worth of business in China if Peng is not fully accounted for and her allegations are not properly investigated.

"We're definitely willing to pull our business and deal with all the complications that come with it," Simon said in an interview Thursday with CNN. "Because this is certainly, this is bigger than the business," added Simon.

"Women need to be respected and not censored," said Simon.

Peng's post on Weibo, China's Twitter-like platform, was deleted within 30 minutes of publication, with Chinese censors moving swiftly to wipe out any mention of the accusation online. Her Weibo account, which has more than half a million followers, is still blocked from searchers on the platform.

The forceful intervention from Simon puts the tennis chief on a likely collision course with authorities in China, which have so far refused to publicly acknowledge Peng's allegations. Perceived criticisms of China, which is also due to host the 2022 Winter Olympics in February, have previously resulted in significant public and political backlash, as well as loss of access.

'Staged statement of some type'

Simon said the WTA had been in conversation with counterparts at the Chinese Tennis Association, who had provided assurances Peng was unharmed in Beijing. However,attempts to reach Peng directly had proved unsuccessful.

"We have reached out to her on every phone number and email address and other forms of contact," he said. "There's so many digital approaches to contact people these days that we have, and to date we still have not been able to get a response."

Earlier this week, Chinese state-media released an email, purportedly sent to Simon from Peng, walking back her allegations and claiming she is fine.

The alleged email was released only on English-language platforms and domestic Chinese media have not reported on its contents, despite Peng being a household name in China.

When asked about the email, Simon questioned its veracity, describing it as a "staged statement of some type," noting he had yet to receive a follow up reply, despite responding immediately.

"Whether she was coerced into writing it, someone wrote it for her, we don't know," said Simon. "But at this point I don't think there's any validity in it and we won't be comfortable until we have a chance to speak with her," he added.

Later on Friday, CGTN journalist Shen Shiwei tweeted three photos he claimed Peng had posted on WeChat along with the message "happy weekend."

Tennis' popularity in China has grown rapidly over the past few decades, with several Chinese players breaking into the global rankings. The women's game, in particular, is a big market, thanks in part to the success of Chinese tennis star Li Na, who in 2011 became Asia's first grand slam singles tennis champion when she won the French Open, followed by a second major title at the 2014 Australian Open.

In recent years, the WTA has made a big push into China. In 2019, the WTA Finals relocated from Singapore to the southern Chinese city of Shenzhen, entering into a lengthy ten year deal.

In an interview with the New York Times from 2018, Simon described the arrangement with authorities in Shenzhen, which reportedly includes the construction of a new multimillion dollar tennis stadium, as a "huge opportunity" for women's tennis in China.

"I am devastated and shocked to hear about the news of my peer, Peng Shuai. I hope she is safe and found as soon as possible," Williams wrote on Twitter. "This must be investigated and we must not stay silent."

Tennis superstar Naomi Osaka on Tuesday said she was "in shock of the current situation."

"Censorship is never OK at any cost, I hope Peng Shuai and her family are safe and OK," she wrote as part of a statement on Twitter alongside the hashtag #WhereIsPengShuai.

The controversy risks impacting the forthcoming 2022 Winter Olympics, which are set to kick off in Beijing in less than three months. Calls for a boycott have been growing in recent months, owing to concerns over China's alleged human rights abuses. On Thursday, US President Joe Biden confirmed he is mulling a diplomatic boycott of the event.

The international concern for Peng, who is a three-time Olympian, having represented China at the 2016 Summer Olympics in Rio, London in 2012, and Beijing in 2008, could now strengthen those calls.

However, the International Olympic Committee (IOC) has distanced itself from putting pressure on Chinese authorities.

In a response to CNN, the IOC said: "Experience shows that quiet diplomacy offers the best opportunity to find a solution for questions of such nature. This explains why the IOC will not comment any further at this stage."

Human Rights Watch accused the IOC of being "silent on the Olympian's disappearance." In a statement, the global rights group said it is "astonishing that the IOC would accept the government's assurances, particularly at the expense of a female Olympian making grave allegations."