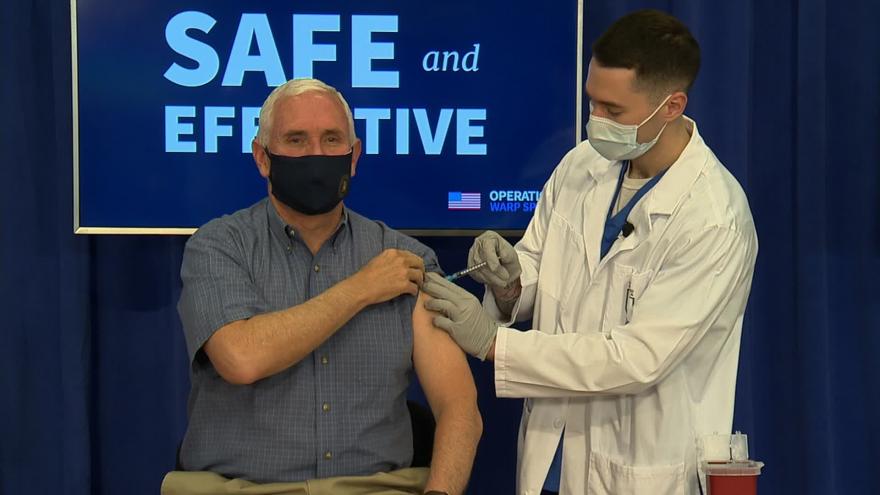 (CNN) -- Vice President Mike Pence received the coronavirus vaccine Friday morning -- an on-camera event that the Trump administration says is part of federal efforts to build confidence among the public in the vaccine's safety and efficacy.

Along with the vice president, second lady Karen Pence and Surgeon General Jerome Adams were administered the vaccine, which has received emergency use authorization and is being rolled out nationwide.

Each were told they will receive a "shot record" confirming they received the vaccine, were reminded they need to return for a second shot in three weeks, and were also warned they could have a sore arm.

"I didn't feel a thing. Well done, and we appreciate your service to the country," Pence said in remarks after being administered the vaccine.

"The American people can be confident: we have one, and perhaps within hours, two, safe coronavirus vaccines for you and your family," he later added.

"All of us have a role to play. The way through this challenging time is vigilance and a vaccine," he said, calling on Americans to "continue to do your part" with mitigation strategies.

Adams spoke about how important minority representation is to instilling trust in the vaccine.

"To truly promote confidence in these vaccines, we must start by acknowledging this history of mistreatment and exploitation of minorities by the medical community and the government," Adams said, referencing the Tuskegee experiment. "But then we need to explain and demonstrate all that had been done to correct and demonstrate all that has been done to correct and address these wrongs."

National Institute of Allergy and Infectious Disease Director Dr. Anthony Fauci said that the decision about the vaccine's safety was not in the hands of a company or administration, but in the hands of scientists, ethicists and public health experts. He said that in the months down the line next year there may be discussions of a return to some kind of normalcy.

President-elect Joe Biden and Vice President-elect Kamala Harris will also receive the vaccine in a public setting, transition officials told CNN. Biden is likely to be vaccinated next week, while timing for Harris' vaccination is still up in the air.

Trump will not be administered a coronavirus vaccine until it's recommended by the White House medical team, a White House official told CNN earlier this week. The President is still receiving the benefits of the monoclonal antibody cocktail he was given during his recovery from Covid-19 in October, the official said, and once he moves into a timing window to receive vaccination, he is likely to get his shot at that point.

"You still want to protect people who are, you know, very important to our country right now," Fauci, the director of the National Institute of Allergy and Infectious Diseases, said Tuesday on ABC's "Good Morning America." "Even though the President himself was infected and he has likely antibodies that likely would be protective, we're not sure how long that protection lasts."

The efforts to get public officials vaccinated on camera follows some initial messaging failures around distribution. As the world watched Britons get the coronavirus vaccine last week, Operation Warp Speed officials appeared bewildered about whether a similar public rollout was planned for the US.

Asked by a reporter last week if there was a plan to publicize the milestone in the US, Health and Human Services Secretary Alex Azar said, "You make me feel as if we should."

The bewilderment highlighted the federal government's lagging effort to instill public trust in the vaccine, which has often been treated as a political prize -- and has been greeted with unusually high skepticism from the American public.

The percentage of Americans willing to take the vaccine is climbing, but it's still lower among some key groups.

In September, 63% of Americans said they would "definitely or probably" get the vaccine. But that number was up to 71% in a Kaiser Family Foundation study released this week.

Still, Black Americans, rural residents and Republicans are all more hesitant about getting the shots.

When asked why Trump wouldn't want to take the vaccine to set an example that it is safe and heed the advice of public health experts, White House press secretary Kayleigh McEnany said earlier this week, "Because he also wants to show Americans that our priority are the most vulnerable."

McEnany said "career staff" and "national security staff" would be vaccinated for the purposes of continuity of government, as well as a "small group" of senior administration officials.

Most of the West Wing had been slated to be vaccinated until the President announced he was rescinding that plan once it became public. White House officials have described it as a difficult position: They are torn between wanting to instill public confidence in the vaccine by taking it and not wanting to be seen as jumping the line, given the limited supply.