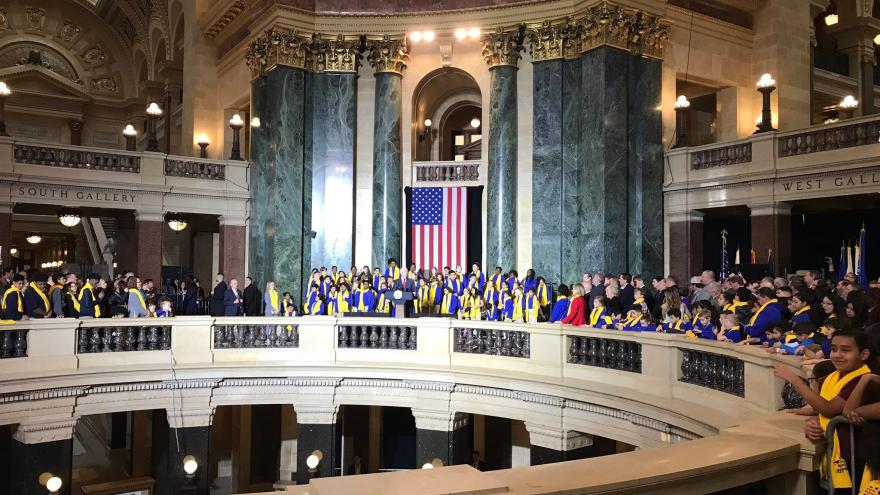 His stop Tuesday in battleground Wisconsin was part of a celebration of national school choice week.

Pence and U.S. Education Secretary Betsy DeVos were both drowned out briefly by chants of “shame” from dozens of protesters who gathered one floor down in the Capitol building.

School choice has long been an issue that divides Republicans and Democrats, particularly in Wisconsin. Conservatives have championed offering students an alternative to public schools, giving Pence a chance to appeal to Republican voters in a swing state.

MADISON, Wis. (AP) — Vice President Mike Pence’s planned visit on Tuesday to Wisconsin’s liberal stronghold of Madison may signal the opening of a new front in the hotly contested campaign to win the battleground state.

Pence was coming for an event celebrating the private school voucher program, which began in Milwaukee 30 years ago and has grown in popularity in the state and country since then. It’s an issue championed by conservatives, and one that Pence supported as governor of Indiana, giving him the chance to appeal to Republican voters in a swing state.

“The Trump campaign is going to do everything they can to find every last voters they can, everywhere they can,” said Wisconsin Democratic strategist Scott Spector.

Democratic strategist Joe Zepecki said Pence’s visit is more about the event itself than where it’s located. But he and Republicans agreed that President Donald Trump is looking for every vote they can in Wisconsin, even in areas like Madison where there are few to be had.

Madison, home to the University of Wisconsin, has so long been the epicenter of liberals in Wisconsin that a former Republican governor in 1978 dubbed it “30 square miles surrounded by reality.” Democrats know they will win in Madison and usually don’t bother to campaign there, if at all, until the waning days of the race when the goal is to fire up the base.

Pence is coming for the first time as vice president, 10 months before the election and just two weeks after President Donald Trump held a rally in Milwaukee.

Trump narrowly won Wisconsin by fewer than 23,000 votes in 2016. He was crushed in Madison and Milwaukee, the epicenters of Democratic support in Wisconsin. Trump got just 15% of the vote in Madison and 18% in Milwaukee.

Even so, coming to Madison now in an election year makes sense because of the media attention the stops generate that will reach voters in more conservative areas far beyond the city’s border, said Republican strategist Brandon Scholz. It also shows that the Trump campaign knows in a tight race it will need to maximize its votes everywhere, not just in rural counties it easily won four years ago, Scholz said.

“They can’t rely on the rest of the state to put them over the top given the intensity the other side will have getting out their base,” he said.

Pence’s stop in Madison is more about securing Republican votes than it is about trying to make inroads with Democrats, he said. In Dane County, where Madison is located, more than 71,000 people voted for Trump in 2016. While it was just 23% of the county total, it was more votes than Trump got in all but two of the state’s 71 other counties.

Still, it is unusual for top-of-the-ticket Republicans to spend time in Madison. Former President George W. Bush, the last incumbent Republican president to run for re-election in 2004, did not campaign in Madison during the entire campaign that year when Wisconsin was also a priority for both sides.

In contrast, his Democratic challenger, John Kerry, held a massive rally with Bruce Springsteen just down the street from the state Capitol that attracted an estimated 80,000 people. Bush lost Wisconsin by just over 11,000 votes on his way to winning re-election.

In 2012, then-President Barack Obama held a rally in the shadow of Wisconsin’s Capitol, again with Springsteen, the day before the election and attracted 20,000 people. Just a month earlier in the campaign he attracted 30,000 people to a rally on the UW campus.

Pence was looking for an event during national school choice week to attend and picked the one in Madison, said Wisconsin School Choice President Jim Bender.

Pence may have been motivated to come by the topic of the event, but with it being in Madison he gets the added bonus of coming to a liberal city in a swing state that he otherwise may have never campaigned in, said the Democratic Spector.

“It’s a smart tactic,” Spector said. “They are taking nothing for granted.”