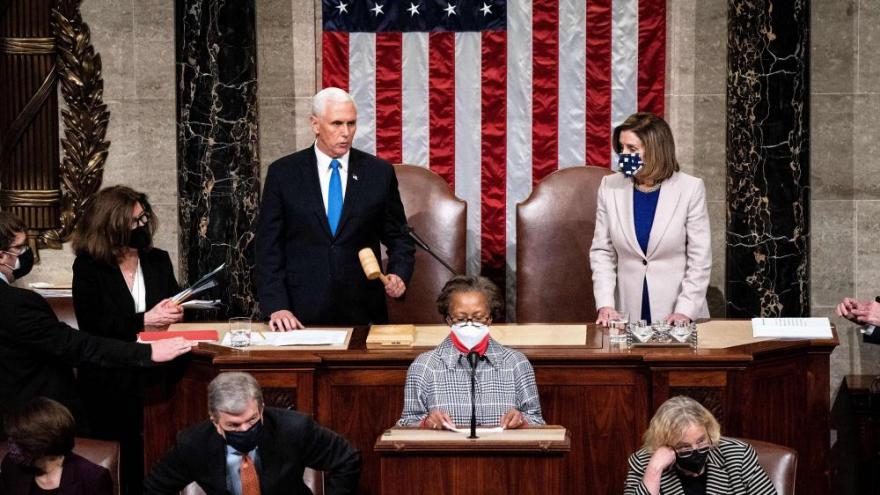 Vice President Mike Pence and House Speaker Nancy Pelosi preside over a Joint session of Congress to certify the 2020 Electoral College results after supporters of President Donald Trump stormed the Capitol earlier in the day on Capitol Hill in Washington, DC on January 6, 2021.

(CNN) -- Former Vice President Mike Pence called out his former boss by name on Friday, saying that "President (Donald) Trump is wrong" in claiming that Pence had the right to overturn the 2020 election on January 6, 2021.

Speaking at the Federalist Society Florida Chapters conference near Orlando, Pence delivered his strongest response yet to Trump's ongoing efforts to relitigate the 2020 presidential election, calling it "un-American" to suggest one person could have decided the outcome.

Pence warned against conservatives who continue to insist the vice president can alter an election, and said it could be a problematic position for Republicans in the next presidential contest.

"Under the Constitution, I had no right to change the outcome of our election, and (Vice President) Kamala Harris will have no right to overturn the election when we beat them in 2024," Pence said.

Pence's remarks followed one of Trump's latest attempts to blame the failed attempt to overturn the 2020 election on his former vice president.

In a statement Sunday, Trump suggested that a recent bipartisan push to revise the counting of Electoral College votes by Congress was proof that Pence had the power to change the results.

The effort to revamp the Electoral Count Act, and clarify that the vice president's role in tallying the vote is ceremonial, is moving quickly in the Senate with the support of GOP Sens. Rob Portman of Ohio, Susan Collins of Maine and Lisa Murkowski of Alaska.

"What they are saying, is that Mike Pence did have the right to change the outcome, and they now want to take that right away," Trump said in the statement. "Unfortunately, he didn't exercise that power, he could have overturned the Election!"

The former President reiterated the claim in a Friday statement reacting to Pence's comments earlier in the day.

But Pence on Friday had maintained that wasn't the case, and he said that "the time has come to focus on the future."

"Look, I understand the disappointment many feel about the last election. I was on the ballot," Pence said. "But whatever the future holds, I know we did our duty that day."

Pence has repeatedly defended his role in certifying the election results on January 6, 2021. Speaking to New Hampshire Republicans in June, he acknowledged that he and Trump remain divided on the events surrounding the riot at the US Capitol.

"I don't know if we'll ever see eye to eye on that day," Pence said.

Days later, he told a crowd in California, "There is almost no idea more un-American than the notion that any one person could choose the American president."

He added that he will "always be proud" that he had fulfilled his constitutional duty hours after a deadly mob of Trump supporters attacked the US Capitol.

Some of those supporters had called for Pence's hanging during their siege of Congress, which took place just hours after Trump had told the crowd that his vice president should "do the right thing" and reject the vote count.

Pence directly addressed that remark in December during an interview with the Christian Broadcasting Network.

"I know I did the right thing," he said.

As he positions himself for a political comeback, Pence has attempted to embrace his record in the Trump administration while distancing himself from his former boss's relentless quest to undermine the last election. It's a tightrope act that other former Trump administration officials with 2024 aspirations may have to attempt, too, including former Secretary of State Mike Pompeo and former United Nations Ambassador Nikki Haley.

But unlike those others, Pence is uniquely villainized by many Trump supporters for his refusal to follow the former President into a constitutional crisis. Pence received a cold reception during a visit to the Orlando area last year to speak at the Faith & Freedom Coalition conference, with some in the crowd booing his introduction. One man was escorted out for yelling, "Traitor!"

Pence received a more friendly reception on Friday from the Federalist Society members gathered in the Disney World complex, though dozens of seats were unfilled. A hush fell over the conference room as Pence described the events of January 6 and he received polite applause as he defended his actions.

The former vice president described the January 6 insurrection at the US Capitol in much different terms than Trump and other Republicans have used in recent days.

At a rally in Texas last week, Trump said that if he is elected president again in 2024, he will consider pardoning those who have been prosecuted for their roles in the insurrection.

And on Friday, hours before Pence was set to speak in Florida, the Republican National Committee approved a resolution formally censuring GOP Reps. Liz Cheney of Wyoming and Adam Kinzinger of Illinois for serving on a special congressional committee investigating the events of January 6. That resolution referred to what happened that day as "legitimate political discourse."

Pence, though, acknowledged that the insurrection as Congress prepared to count the states' Electoral College votes marked "a dark day in the history of the United States Capitol."

"Lives were lost and many were injured, but thanks to the courageous action of the Capitol Police and federal law enforcement, violence was quelled, the Capitol was secured and we reconvened the Congress that very same day to finish our work under the Constitution of the United States and the laws of this country," Pence said.

Meanwhile, Pence's former staff are cooperating with the House committee probing the insurrection. CNN reported last month that Marc Short, Pence's chief of staff, quietly testified before the House select committee in response to a subpoena in January. The committee has considered asking Pence himself to testify, CNN previously reported.

Pence's break with Trump came at the end of a speech in which he had largely focused on criticizing President Joe Biden's administration.

The former vice president claimed credit for the coronavirus vaccines that were developed while Trump was in office, claiming that the effort to develop and distribute vaccines was "a medical miracle." He said he had been vaccinated himself.

But he said Biden was wrong to attempt to mandate vaccinations, forcing health care workers who "took the beach without body armor for a year" to now "choose between vaccines and their jobs."

Pence also criticized Biden over his plan -- following a 2020 campaign pledge -- to nominate a Black woman to the Supreme Court to fill the seat of retiring liberal Justice Stephen Breyer. He said Biden is choosing a court nominee "based first and foremost on the candidate's race and gender."

"If the radical left doesn't end its obsession with identity politics, it will tear this country apart," Pence said.