Pence: 'Any American can be tested' for coronavirus 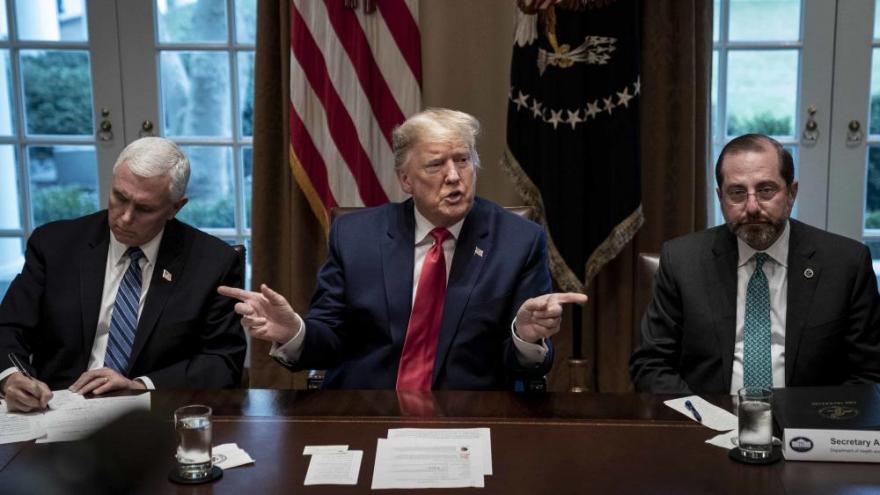 Vice President Mike Pence said that "any American can be tested" for the novel coronavirus, as the Trump administration struggled to clear up confusion and mixed signals over testing amid concerns that tests were not being made available soon enough.

(CNN) -- Vice President Mike Pence on Tuesday evening said that "any American can be tested" for the novel coronavirus, as the Trump administration struggled to clear up confusion and mixed signals over testing amid concerns that tests were not being made available soon enough.

Pence said in an off-camera briefing at the White House that there was new guidance from the Centers for Disease Control and Prevention that any American could be tested -- "no restrictions, subject to doctors' orders." The announcement follows numerous complaints of citizens asking to be tested and turned away due to the strict CDC testing criteria. Pence said the new guidance will make clear "that any clinician or health authority can administer the test."

The change was announced after confusion over how quickly the US could ramp up testing for roughly 1 million people for coronavirus. After suggesting Monday that the US would be able to test close to 1 million people for coronavirus by the end of the week, the Trump administration has since clarified -- creating more confusion among frustrated people eager to protect themselves against the virus.

The CDC on Wednesday dramatically expanded the testing criteria for the novel coronavirus, formalizing Pence's announcement. The CDC formally removed earlier restrictions that limited coronavirus testing of the general public to people in the hospital, unless they had close contact with confirmed coronavirus cases. According to the CDC, clinicians should now "use their judgment to determine if a patient has signs and symptoms compatible with COVID-19 and whether the patient should be tested."

During a Senate hearing Tuesday, FDA Commissioner Stephen Hahn was greeted by skeptical lawmakers and pushed to explain how he thinks the United States could do a million tests when, to date, it has only been able to perform about 3,600 tests.

"I want to distinguish between the ability to get the test kits out to the laboratories with the ability of the labs to actually do the tests," Hahn told lawmakers, offering no clarity on how many tests could actually be run by the end of the week.

This was among a number of government missteps that has left Americans scared and confused about how to protect themselves during the viral outbreak. Outside of US borders, countries debilitated by the virus have seen advancements in the testing process. In South Korea, there's a drive-through testing site that officials say is safer because there is "less-face-to-face" contact, and in some countries in Europe, thousands of tests are being run daily.

On Capitol Hill, Pence and his coronavirus response team briefed Republicans and Democrats behind closed doors about the response to the virus, but Democrats left the briefing expressing alarm that the Trump administration was unprepared.

"We need the questions to be honest, it can't be 'well, we're going to, we're going to' -- that's not what families hear right now," said Sen. Patty Murray of Washington state, the top Democrat on the Senate Health, Education Labor and Pensions Committee. "They hear, 'We will not have a test for three months, and therefore we need you to do this.' We're asking for honesty."

Republican Sen. Lindsey Graham of South Carolina said he was assured that over a million testing kits "are going out the door" and that testing will get "more robust" by the end of the week. He said Republicans raised concerns during the briefing about the testing so far, but that his understanding is that the additional kits and increased involvement by commercial manufactures should address that issue, agreeing with colleagues that "the key is more testing."

A senior administration official acknowledged the Trump administration is feeling a major sense of urgency to distribute testing kits for the coronavirus, amid bipartisan criticism that the kits are being deployed too slowly.

"It's a flashpoint right now," the official said.

The official conceded that the question coming in from health professionals nationwide as well from both Republican and Democratic lawmakers is "Why can't the feds give us tests?"

According to the Association of Public Health Laboratories, a collection of government labs across the country, as of Tuesday evening, 56 out of 100 laboratories are currently capable of conducting the test, each one with the capability to test about 100 patients per day. APHL CEO Scott Becker noted that even if all APHL labs were up and operating at full capacity, they would only be able to test about 10,000 patients a day within the public health system.

Becker said the labs must successfully verify the CDC's test before testing for the virus.

"What we are doing right now in these next few days is playing catch up," Becker told CNN, referring to delays resulting from issues with tests delivered to labs last month. "Admittedly we were behind, but I have good confidence that we will get back on track."

A spokesperson for the FDA said in a statement that state and local public health labs will be able to test up to 75,000 people by the end of the week. That spokesperson added that a commercial manufacturer, IDT, is producing additional CDC tests and expects to have shipped test kits capable of about 1 million tests to academic, healthcare and commercial labs by the week's end.

One public health official who requested anonymity told CNN his lab was currently developing their own test but it would still be weeks before it was live. This official expressed frustration at the current testing situation.

"The government has not made this process easy for [health officials] to help catch cases of coronavirus before they spread," they said.

In order to receive test kits from the CDC, labs that are approved by the agency must place an order for the kit. Many state labs will still not be able to immediately run tests as soon as receiving the kit -- opting to first conduct a series of quality control tests — which will prolong the process. Each kit can test about 700 to 800 patient specimens, according to the CDC.

Last month, the CDC announced that some test kits shipped to labs were not working properly and were falsely identifying the presence of other viruses. The tests weren't able to be used for weeks because of the flaw.

On Saturday, the FDA posted new guidance "to achieve more rapid testing capacity" that allows certain US labs to test for the novel coronavirus using diagnostics the labs developed and validated on their own, even before the agency has reviewed them.

LabCorp has said on its website that the company plans to make a test available "as soon as possible." A company spokesperson did not respond to a request for more detail.

Another diagnostic company, Qiagen, tweeted that it was "ramping up production" of coronavirus test kits. Qiagen said in a statement to CNN that it's planning to submit an application to the FDA, but said the process "does take some time."

California-based company Cepheid told The New York Times that it does not expect to get FDA approval for its test before April.

Getting the tests ready is essential as the highly contagious virus continues to spread. According to the CDC, coronavirus is thought to be spread mainly from person to person. Once a person has tested positive for the virus, they can be quarantined and stem the spread.

Michael Mina, assistant professor of epidemiology and immunology at Harvard T.H. Chan School of Public Health, said the US government has taken "positive steps" in recent days when it comes to testing, such as the FDA's policy announced Saturday to allow certain labs to develop and validate their own diagnostics for tests.

But Mina added that the CDC hindered the readiness of labs by announcing last month that some test kits shipped to labs were not working as they should but then providing limited information to labs in the weeks that followed.

Surgeon General Jerome Adams said Monday that while the US has seen an increase in coronavirus cases, there's no need to panic.

Lawmakers continue to press for additional information about the response to the virus. House Oversight Chairwoman Carolyn Maloney of New York and other top Oversight Democrats sent letters to Health and Human Services and the CDC seeking more information on testing, diagnoses and the costs of treating coronavirus.

Sen. Maria Cantwell of Washington state, the top Democrat on the Senate Commerce, Science and Transportation Committee, sent letters to airlines and airports to ask about their plans to deal with the Coronavirus outbreak and their pandemic response plans.

And Republican Sen. Rick Scott of Florida said Tuesday that tests should be free for anyone who experiences symptoms from the virus.

This story has been updated to reflect the CDC's new guidance on testing for coronavirus.