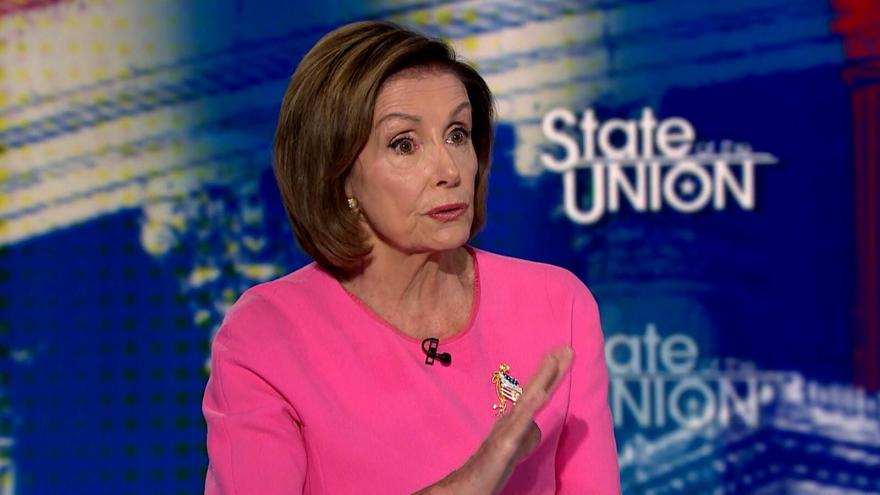 House Speaker Nancy Pelosi says that the "plan" is for there to be an "agreement" on a framework for the Democrats' budget reconciliation package and a vote on the bipartisan infrastructure bill next week.

(CNN) -- House Speaker Nancy Pelosi said Sunday Democrats are planning to have an "agreement" on a framework for President Joe Biden's sweeping social safety net plan and a vote on the bipartisan infrastructure bill in the next week.

"That's the plan," she told CNN's Jake Tapper on "State of the Union."

The goal among Democratic leaders is to have a vote Wednesday or Thursday on the infrastructure package and send it to Biden's desk, a source briefed on the plan says. The hope is to have a detailed agreement on the larger social safety net package agreed to before then to help convince progressives to vote for the bipartisan measure.

Asked if they'll have a deal on Democrats' spending bill by the time Biden leaves for Europe later this week, Pelosi said, "I think we're pretty much there now."

"We're almost there. It's just the language of it, but it will not offend, shall we say, the concern that Sen. (Joe) Manchin had about the (Clean Electricity Performance Program), but nonetheless, the point is to reach a goal," she said.

It's unclear what the final price tag will be on the larger plan but the source said that Manchin has informed Democratic leaders he's open to $1.75 trillion.

Pelosi had expressed optimism that the particulars of the bill will be finalized during a Sunday morning meeting among Biden, Senate Majority Leader Chuck Schumer and Manchin, who has been one of two key holdouts on the package, at the President's home in Delaware.

She again stressed that Congress needs to pass the bipartisan infrastructure bill by October 31 before an extension of funding for surface transportation expires. "We have to get billions of dollars someplace to continue that," she said.

Pelosi also said that potential ways to pay for the Democrats' social safety net bill could include a billionaires' tax and IRS tax enforcement, now that corporate tax rate increases won't be considered because of Arizona Democratic Sen. Kyrsten Sinema's objection to them.

"This is a Senate proposal, and they're supposedly writing it today; tomorrow they would introduce it," she said specifically about the tax proposal part of the reconciliation bill.

Pelosi deputy chief of staff and spokesperson Drew Hammill quickly clarified that Pelosi meant only the tax proposal is being advanced in the Senate in a tweet sent during Pelosi's on-air interview.

Responding to Pelosi's comments, Democratic Rep. Ro Khanna told Fox News Sunday that reaching an agreement on the spending bill's framework would satisfy him even if bill text wasn't written by the end of the week.