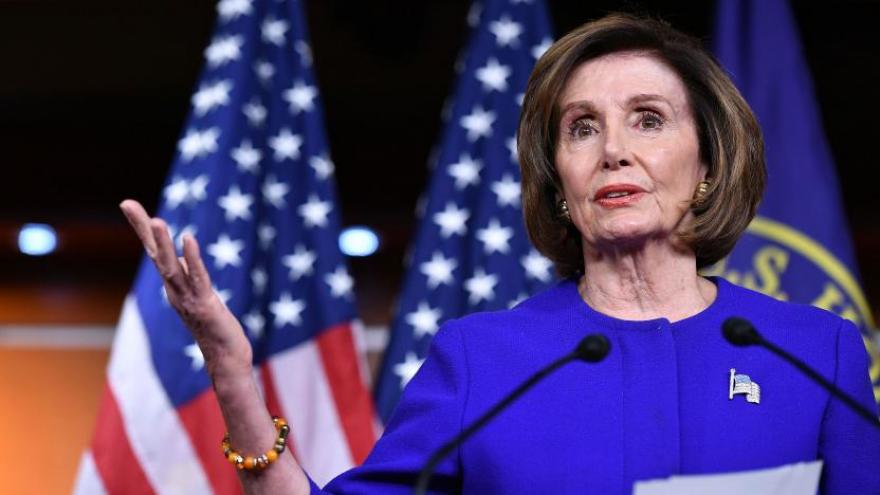 House Speaker Nancy Pelosi said Thursday that lawmakers are "close to a bipartisan agreement" on emergency funding to respond to the coronavirus outbreak, as concerns about the spread of the disease mount worldwide.

(CNN) -- House Speaker Nancy Pelosi said Thursday that lawmakers are "close to a bipartisan agreement" on emergency funding to respond to the coronavirus outbreak, as concerns about the spread of the disease mount worldwide.

"We're coming close to a bipartisan agreement in the Congress as to how we can go forward with a number that is a good start," Pelosi told reporters at her weekly press conference.

"We don't know how much we will need. Hopefully not so much more because prevention will work, but nonetheless we have to be ready to do what we need to do," she said.

She added, "we are trying to work in a bipartisan way, that's one of the reasons that I was delayed in meeting with you this morning."

Lawmakers have expressed alarm over the outbreak and have raised a number of questions about how prepared the United States government is to combat the virus, with Democrats calling President Donald Trump's administration's efforts insufficient.

Congressional appropriators are now working to determine the details and top-line numbers of an emergency coronavirus funding package in an effort to deal with the public health threat.

House Minority Leader Kevin McCarthy said at his own press conference on Thursday that congressional Republicans and Democrats are seeking a bipartisan agreement on funding -- and said he's optimistic "we can get this done next week."

"This isn't something to wait around" he said. "I think you'll find a very bipartisan vote. From my point of view, I want to get it done faster than waiting around and I don't think you're going to see an argument on either side."

The California Republican wouldn't get into specifics on what kind of topline number is being looked at, saying, "it's not my place to sit here and pick a number. The one thing I would say, just exactly what the President said, we will do whatever is needed to make sure we keep this country safe."

On Wednesday, he said appropriators were looking at about $4 billion, saying he believes $2 billion is not enough.

Senate Democratic leader Chuck Schumer put forward a proposal for $8.5 billion to combat the virus on Wednesday, adding contention to talks with the administration, which earlier in the week requested $2.5 billion and only $1.25 billion in new funding, the rest of which was diverted from other sources. The administration's position was that if more money was needed, they would come back to the issue later.

McCarthy on Thursday was dismissive of Schumer's proposal. "Just picking a number out of a hat like that never seems to work properly. I would like to know what the experts believe they need, make sure we fund that," he said.

At a White House news conference on Wednesday evening, however, Trump did not close the door to Senate Democrats' call for more than $8 billion in emergency funding for anti-coronavirus efforts.

"We'll spend whatever is appropriate," Trump said. "Hopefully, we won't have to spend so much because we really think that we've done a great job in keeping it down to a minimum."

Despite talk that a bipartisan agreement can soon be reached in Congress, Democrats and Republicans are continuing to aim criticism across the aisle over the current situation.

Pelosi was critical of the administration's handling of coronavirus so far, saying, "unfortunately, up until now the Trump administration has mounted an opaque and often chaotic response to this outbreak."

She also expressed concern over Vice President Mike Pence's track record as Indiana governor on public health as he steps into a high-profile role of responsibility in dealing with coronavirus.

The President on Wednesday placed Pence in charge of the US government response to the coronavirus, amid growing criticism of the White House's handling of the outbreak.

"I spoke with the Vice President this morning, made some of these concerns known to him. We have always had a very candid relationship and I expressed to him a concern that I had of his being in this position and while I look forward to working with him about when he was governor of Indiana slashing the public health budget," she said.

McCarthy, for his part, slammed Democrats for criticizing the President's handling of the virus, claiming that "Democrats unfortunately can't help but put politics over the country" and contending that "they would rather attack the President's response to a crisis than work together to solve it."