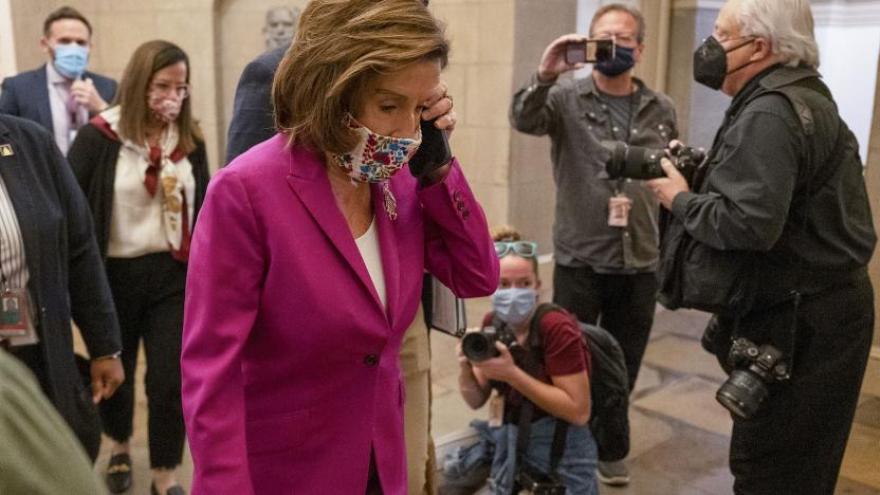 U.S. House Speaker Nancy Pelosi, a Democrat from California, arrives to the U.S. Capitol in Washington, D.C., U.S., on Friday, Nov. 5, 2021. The House plans to vote today on the White House's $1.75 trillion economic package and a separate infrastructure bill, after intense 11th-hour negotiations by the House Speaker appeared to settle lingering differences.

(CNN) -- Congress has passed a $1.2 trillion bipartisan infrastructure bill, delivering on a major pillar of President Joe Biden's domestic agenda after months of internal deliberations and painstaking divisions among Democrats.

The final vote was 228-206. Thirteen Republicans voted with the majority of Democrats in support of the bill, though six Democrats voted against it.

The bill now heads to the President's desk to be signed into law, following hours of delays and internal debating among Democrats on Friday, including calls from Biden to persuade skeptical progressive members of the Democratic caucus.

The legislation passed the Senate in August, but was stalled in the House as Democrats tried to negotiate a deal on a separate $1.9 trillion economic package, another key component of Biden's agenda that many Democrats had tied to the fate of the infrastructure bill.

The legislation that passed Friday night will deliver $550 billion of new federal investments in America's infrastructure over five years, including money for roads, bridges, mass transit, rail, airports, ports and waterways. The package includes a $65 billion investment in improving the nation's broadband infrastructure, and invests tens of billions of dollars in improving the electric grid and water systems. Another $7.5 billion would go to building a nationwide network of plug-in electric vehicle chargers, according to the bill text.

Biden called House Speaker Nancy Pelosi just before midnight to congratulate her on the passage of the infrastructure bill, a source familiar with the call told CNN. On the call, Pelosi thanked Biden for his help in getting the bill over the finish line as well.

Going into Friday, Pelosi said it was her intention to vote on final passage of the infrastructure bill and the economic package known as the Build Back Better Act. Instead, early Saturday morning, the House passed the rule that will govern debate on the Build Back Better Act on a party-line vote, before adjourning for a week-long committee work period.

However, Pelosi later in the afternoon indicated that they would solely move the infrastructure bill amid push back from moderates that the separate economic agenda bill needs an official cost estimate from the Congressional Budget Office, a process that could take about two weeks.

The party had been struggling for months to unite its moderate and progressive wings to enact the President's agenda, but those efforts had repeatedly stalled out, delivering a series of blows to congressional Democrats and the White House. The party had already had to punt on voting on the infrastructure bill twice in two months due to a separate set of demands from progressives. Biden has gotten personally involved, visiting the Hill twice to rally Democrats, and working the phones with moderates this week. That has still not resolved the impasse.

Shortly after, Congressional Progressive Caucus Chairwoman Pramila Jayapal released a statement saying that the caucus had reached a deal with fellow Democrats to vote on the infrastructure bill Friday night, abandoning a key tenet of their position, which was to only vote for the infrastructure bill when the social spending bill also would receive a final vote.

Even though Jayapal's statement brought a significant number of progressives onboard, there were still six progressive holdouts who stuck to their original plan of voting against infrastructure until the social spending plan also received a final vote. The brokered deal between Jayapal and moderates did peel off a significant number of progressives from the vote down infrastructure camp, as that number was as high as 20 at one point during the day on Friday.

As frustration over the holdup intensified, House leadership pressed ahead with a plan to vote on the infrastructure bill and a separate rule governing debate for the social spending bill.

Pelosi held firm at a news conference that the new plan will go forward and sounded confident about the prospects of passing the infrastructure bill, though she did not explicitly say there is enough support to approve the measure.

Asked if she has 218 votes to pass the infrastructure bill without the social spending bill, Pelosi only said "we'll see."

Pelosi said with a smile at one point, "I have the speaker's secret whip count."

"I do believe there are a large number of members of the progressive caucus who will vote for the bill," she said.

Biden called Jayapal, a Washington state Democrat, this afternoon amid the standoff, according to three sources familiar with the matter. She left a meeting of the Congressional Progressive Caucus early to take the call.

After the call, Jayapal asked for a show of hands of those who would not back the infrastructure bill, roughly 20 progressives raised their hands, according to a source in the room.

The President separately called into a meeting of the Progressive Caucus itself and spoke on speakerphone to the members, according to two sources familiar with the call, pushing a vote on the infrastructure bill. Biden also scrapped his travel to Rehoboth Beach, Delaware, on Friday night as initially planned, according to a White House official, as he continues to push for a path forward on advancing his agenda.

Part of Biden's message to progressives Friday is that he was willing to work with them to find some kind of solution, so long as they agreed to vote for the infrastructure bill in the coming hours, according to a source familiar with the call. Things moved toward the process of crafting a statement, backed by the moderates and Biden, that would provide explicit and concrete assurances related to the future vote on Biden's economic and climate agenda bill, known as the Build Back Better Act, the source said.

Multiple sources told CNN that Jayapal and moderate Democratic Rep. Josh Gottheimer of New Jersey were in direct talks as they tried to finalize a deal that could get the infrastructure bill to the President's desk Friday with concrete assurances the moderates would back the Build Back Better Act.

The memo issued by five moderate members of the Democratic caucus was aimed at giving those assurances. Gottheimer and fellow moderate Democratic Reps. Ed Case of Hawaii, Stephanie Murphy of Florida, Kathleen Rice of New York and Kurt Schrader of Oregon vowed to vote for the social spending package "in its current form other than technical changes, as expeditiously as we receive fiscal information from the Congressional Budget Office -- but in no event later than the week of November 15."

Frustration throughout the day

Some House Democrats were angry at the handful of moderates holding up action over demands that the $1.9 trillion bill get a cost estimate from the Congressional Budget Office, a process that could take weeks.

"Not one of my constituents cares about the CBO," said one member.

"Everyone is anxious to get this done," another member said. "There's growing frustration that the Blue Dogs keep moving the goal post. Every time we get close, they come up with a new demand." The Blue Dog Coalition is a group of centrist House Democrats.

Progressive members were also not happy with the new plan being pushed by leadership of letting infrastructure pass without the social spending bill, multiple sources told CNN.

"They would lose at least 20 votes of Pramila, squad and core progressives for BIF if they chose that route. It won't pass," one progressive told CNN, referring to Jayapal, the Congressional Progressive chairwoman, and other members of the caucus and the bipartisan infrastructure bill, which is frequently referred to as BIF.

Five moderates signed onto a letter this week calling for a CBO score, before floor consideration of the Build Back Better Act.

CBO scores of legislation provide an estimate of the effects the policies could have on revenue and spending. Moderates, many of whom have expressed concerns over the overall cost of the bill, argue it is important to have that information and a full picture of the potential impact of the sweeping social safety net plan before holding a vote.

But it could take some time to prepare such a cost estimate. In the meantime, Democratic leadership is relying on a White House analysis saying the bill is fully paid for, based in part on the non-partisan Joint Committee on Taxation.

House Budget Chairman John Yarmuth, a Democrat from Kentucky, told CNN he expected a CBO score to take about 10-14 days, and wouldn't be done until the week before Thanksgiving. Some think it could slip until the week of Thanksgiving, though preliminary estimates could be done earlier.

Schrader, who signed onto the letter calling for a CBO score, left Pelosi's office earlier on Friday and told CNN "we have no resolution that I know" when asked if he is ready to vote on Build Back Better.

In one sign of progress for leadership, after meeting in Pelosi's office, Democratic Rep. Carolyn Bourdeaux of Georgia tweeted that she is not against voting for the social spending bill and that the CBO score is not a red line for her.

"There are a lot of rumors swirling. Let me be clear — this bill is paid for and it has a number of my priorities in it. If it comes to the Floor today — I will support the Build Back Better Act," she said.

Democratic sources say that negotiations over immigration provisions have been resolved — and the last remaining hurdle to passing a bill is the demand by five moderates that they get a CBO score before a vote.

In a sign that a deal is getting closer, House Democrats have also resolved another sticking point: How to deal with state and local tax deductions, according to multiple sources familiar with the matter. Democrats from the Northeast and West Coast have been pushing to loosen the caps imposed by the 2017 tax law.

Under the new SALT deal, deductions would be capped at $80,000 per year over a nine-year time span, according to Rep. Tom Malinowski, who helped cut the deal.

Before this week, demands from progressives had taken center stage in the push to pass the bills in the House. Progressives have demanded that both the social safety net plan and the infrastructure bill move in tandem.