Pelosi: House to vote next week protecting Supreme Court justices and their families after man arrested near Kavanaugh's home 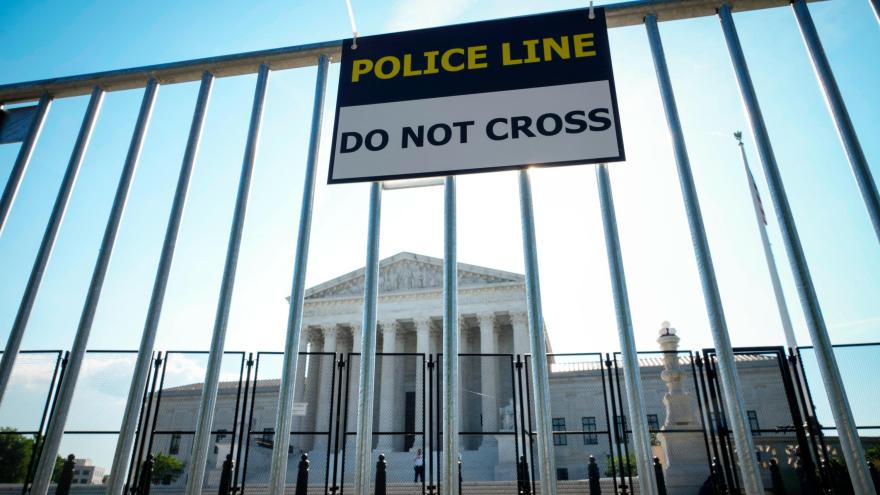 (CNN) -- The House will consider a Senate-passed bill to enhance security for Supreme Court justices and their families next week, House Speaker Nancy Pelosi said Thursday, after a man was arrested near Justice Brett Kavanaugh's home.

"We had hoped that we could do it today but we certainly will do it at the beginning of next week," Pelosi, a California Democrat, told reporters.

The bill's purpose was brought into sharp focus early Wednesday when an armed man was arrested near Kavanaugh's Maryland home after making threats against the justice, according to a court spokesperson. The man told law enforcement he had traveled from California to kill "a specific United States Supreme Court Justice," according to an FBI affidavit filed Wednesday.

Separately on Wednesday, a group named Ruth Sent Us called on followers on Twitter to join in a protest against Justice Amy Coney Barrett in suburban Virginia.

"If you're in the DC metro area, join us. Our protests at Barrett's home moved the needle to this coverage," the tweet read.

The tweet referred to the Virginia suburb where the protest would take place as "a People of Praise stronghold," while also referencing a school the group said Barrett's children attend and saying that the justice "attends church DAILY."

The group's Twitter bio reads: "to expose our corrupt and illegitimate Supreme Court." The group previously tweeted that it is "committed to non-violence," that its protests "are peaceful and joyful" and that it "didn't send" the armed man arrested near Kavanaugh's home.

Barrett's association with People of Praise, a Christian group, was discussed at the time of her nomination to the Supreme Court in 2020 to succeed the late Justice Ruth Bader Ginsburg, a liberal icon.

CNN has reached out to Ruth Sent Us as well as the Fairfax County Police Department and the US Marshals Service, which is providing security at the homes of Supreme Court justices. The Supreme Court did not respond to a request for comment.

While the legislation to boost security for the justices passed the Senate by unanimous consent in May, it has stalled in the House, angering some lawmakers who have stressed the urgent need for it. It's still unclear if the House will want to amend the bill to include protection for clerks and other staff, as some lawmakers previously indicated.

Republicans have railed against Democratic leadership for not putting the bill on the floor for a vote before they adjourned for the week. On the House floor Thursday morning, House Minority Leader Kevin McCarthy asked for the chamber to approve by unanimous consent the Senate-passed bipartisan bill.

House Democratic leadership didn't agree to the vote because they want a broader bill that would include enhanced security, which could include extending protection to clerks and other staff.

House Minority Whip Steve Scalise asked House Majority Leader Steny Hoyer during an exchange on the floor why Democratic leadership hadn't put the bill to a vote after it unanimously passed the Senate.

"I think it's a very relevant question," Hoyer said in response. "Hopefully can move that as early as possible. I want to tell the gentleman the reason he thought that it might be moving this morning was because last night I thought I had after discussions with Sen. Cornyn, a way forward both the Senate and the House could agree on. Unfortunately this morning that appeared not to be the case."

That back-and-forth had been preceded by a heated phone call between Hoyer and McCarthy earlier in the day, one GOP source familiar with the matter said.

The GOP source characterized the lawmakers' argument over the phone Thursday morning as a "screaming match," after Hoyer informed McCarthy that House Democrats were not planning to unanimously and quickly clear the Senate-passed bill.

A Hoyer spokesperson said they did not comment on private member conversations.

Hoyer told McCarthy on that phone call that Democrats wanted to amend the bill to include protections for court staff. But McCarthy pushed back, arguing they should just pass the Senate bill now before lawmakers leave town and pass the rest when they get back, according to the GOP source.

McCarthy also accused Democrats of an unnecessary delay and warned Hoyer that he would raise the issue publicly if Hoyer followed through with his plan, the source added.

True to his word, McCarthy later went to the House floor and tried to bring up the Senate bill for an immediate vote, but was denied. McCarthy then headed to a news conference, where he kicked things off by complaining about Democrats holding up the bill.

Their heated conversation -- which was first reported by Punchbowl News -- is notable given that the pair normally has a cordial relationship. But tensions have been high between them ever since the select committee investigating the January 6, 2021, insurrection subpoenaed McCarthy to appear before it.

Senate Judiciary Chairman Dick Durbin said earlier Thursday that the House is "ready to move" on the bill, telling reporters that "we're ready to meet with them and resolve our differences" on the legislation.

"What happened this week with Justice Kavanaugh is a reminder that we live in a dangerous place, and these people are vulnerable and we should protect them," Durbin said.

Senate Minority Leader Mitch McConnell has been critical of the House for its inaction on the legislation, and on Thursday he slammed Pelosi for what he called a "dangerous dereliction of duty" for slow-walking its passage.

"Inexplicably, this urgent and uncontroversial bill has been sitting on Speaker Pelosi's desk ever since," he said. "The same House Democrats whose irresponsible rhetoric has contributed to this dangerous climate are themselves blocking added security for the judges and their spouses and their children."

Democratic Sen. Chris Coons of Delaware told CNN on Wednesday he is still working with the House on a compromise to enhance security, which could include extending protection to clerks and other staff.

"I've actually been engaging with several House members about how we come to a negotiated compromise on that bill and move it forward promptly," said Coons, noting that the main sticking point is "a relatively simple issue of whether or not the scope of it also includes clerks and other staff."

There has been a rise in threats against the court amid the national abortion rights debate and protests that have taken place across the US. The Department of Homeland Security issued a memo last month warning law enforcement that there are potential threats to members of the Supreme Court after a draft opinion overturning Roe v. Wade was leaked.