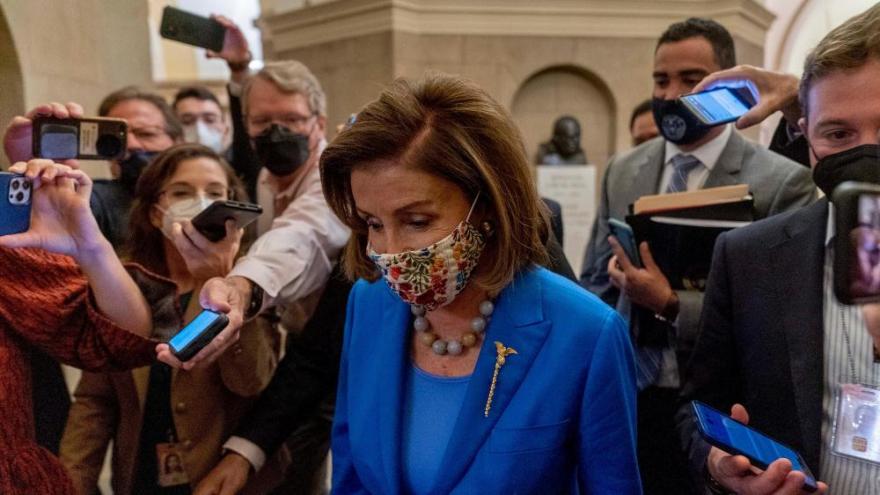 Pelosi's effort to pass the infrastructure bill is complicated by West Virginia Sen. Joe Manchin, a moderate Democrat who said Thursday he would support a much smaller, $1.5 trillion bill expanding the social safety net.

(CNN) -- House Speaker Nancy Pelosi ruled against putting a $1 trillion infrastructure bill on the floor Thursday night, according to a leadership aide, after progressives rebelled, potentially delaying consideration until Democrats strike an agreement on separate, much larger social safety net and climate legislation.

Pelosi's decision came after hours of intense negotiations, including a call with President Joe Biden and a crush of meetings and calls with members of the House Democratic caucus. The delay puts the speaker past her second self-imposed deadline to hold a vote on the plan after postponing the vote that had been originally slated for Monday.

"A great deal of progress has been made this week, and we are closer to an agreement than ever," Psaki wrote. "But we are not there yet, and so, we will need some additional time to finish the work, starting tomorrow morning first thing."

Liberal Democrats were confident this week that they had the numbers to block the bill, which would spend hundreds of billions of dollars upgrading roads, bridges, transit, rail, broadband, airports, ports and waterways.

They hope their hardball tactics would push moderates to support their top priority: a $3.5 trillion bill known as the Build Back Better Act. That legislation would expand the child tax credit and Medicare's ability to cover vision, hearing and dental care, fund community college and universal pre-kindergarten initiatives, combat climate change, and fund elder care and paid leave programs. The $3.5 trillion bill would be paid for, at least in part, by tax increases primarily on corporations and the wealthy.

Vermont Sen. Bernie Sanders told CNN that the infrastructure deal should be "defeated" and railed against Pelosi's late-night deal-making effort.

"It is an absurd way to do business, to be negotiating a multitrillion-dollar bill a few minutes before a major vote with virtually nobody knowing what's going on," Sanders said. "That's unacceptable. And I think what has got to happen is that tonight, the bipartisan infrastructure bill must be defeated. And we can sit down and work out a way to pass both pieces of legislation."

Pelosi's effort to pass the infrastructure bill is complicated by West Virginia Sen. Joe Manchin, who said Thursday he would support a much smaller, $1.5 trillion bill expanding the social safety net, and Arizona Sen. Kyrsten Sinema. The two moderate Senate Democrats met for about 45 minutes on Thursday evening, as they tried to find a way forward on both the infrastructure and Build Back Better plans.

With a split Senate and a slim hold on the House, Democrats are leveraging their power to make sure their colleagues support their bills, which comprise Biden's domestic agenda.

Progressives say they'll withhold their support on the bipartisan infrastructure package until moderates strike a deal with them on the Build Back Better Act. Washington state Rep. Pramila Jayapal, the Congressional Progressive Caucus chairwoman, told CNN she was not worried that her liberal colleagues would break ranks.

"I have never seen our caucus so strong," said Jayapal. "And I'm a very good vote counter, also, maybe not quite as good as Nancy Pelosi sometimes, but I'm excellent."

But at least a dozen House Republicans are expected to vote for the roads and bridges bill, allowing Pelosi to lose some members on her left flank.

One source told CNN that Pelosi had success Thursday flipping some Democrats into the "yes" column.

"The number (of no votes) is coming down," the source said.

New Jersey Rep. Josh Gottheimer, co-chair of the bipartisan Problem Solvers Caucus, touted that he and Pelosi were both whipping Democrats on the floor.

"She's doing it," he said earlier Thursday. "It's the Pelosi magic."

Following the announcement that the vote had been postponed, Gottheimer tweeted, "It ain't over yet!"

"This is just one long legislative day — we literally aren't adjourning," he wrote, referring to how the House is not fully adjourning and is scheduled to reconvene at 9:30 a.m. ET on Friday. "Negotiations are still ongoing, and we're continuing to work. As I said earlier: grabbing some Gatorade and Red Bull."