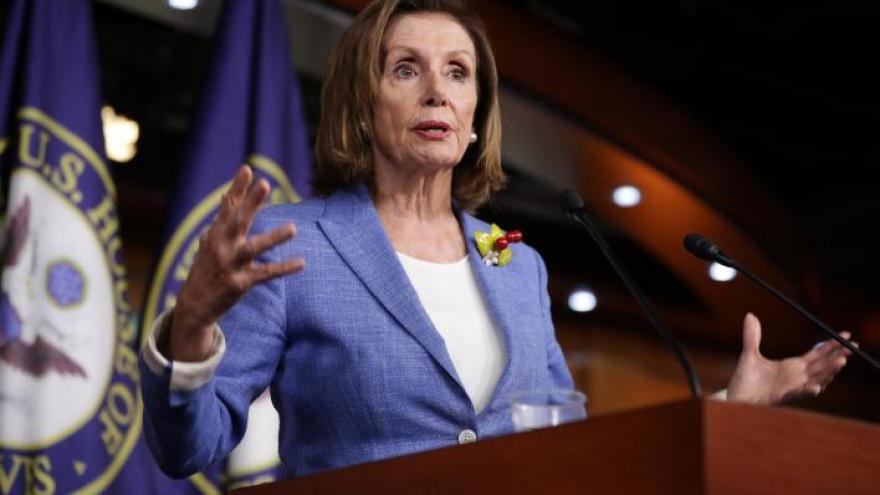 Democratic leaders and the White House held a round of productive meetings on Saturday, but reported that they remain far apart on an agreement. Pelosi and Mnuchin, along with Senate Minority Leader Chuck Schumer and White House chief of staff Mark Meadows, said they expect to meet Monday to resume discussions.

"We obviously need bipartisan support to get any deal done, the last two deals we got done 96-0 and 100-0. I think it's pretty fair to say that we're not going to do that again," Mnuchin told reporters Sunday.

Asked on Sunday by ABC's Martha Raddatz on "This Week" when negotiators could potentially have a deal, Pelosi said, "We'll be close to an agreement when we have ... an agreement."

Each doubled down on what has been a main sticking point in negotiations: the extension of federal enhanced unemployment benefits that expired Friday.

"The amount of money that is given as an enhancement for unemployment insurance should relate to the rate of unemployment, so as that goes down, you can consider something less than the 600, but in this agreement, it's 600," Pelosi explained.

However, the California Democrat disputed Hoyer's comment that there was "some validity" to the Republicans' argument that the $600 benefit is a disincentive for some Americans to go back to work, arguing that she has statistics to prove that the federal money is keeping people out of poverty.

"The $600 is essential. It's essential for America's working families. And, again, to condescend, to disrespect their motivation is so amazing ... how insistent the Republicans are about a working family and their $600 and how cavalier they are about other money that is going out," the California Democrat said.

She later noted that Democrats are "unified" in their support for the $600 benefit, and claimed that Republicans are in "disarray."

Mnuchin argued that the White House had proposed a one-week unemployment benefit extension of $600 as negotiations continued, but had been rebuffed by Democrats. Without giving details, the Treasury secretary also said he and Meadows made "three or four" other offers to the Democrats to deal with enhanced unemployment.

Unemployment "should be tied to some percentage of wages, the fact that we had a flat number was only an issue of an emergency," Mnuchin said in an interview on ABC "This Week," but he added: "On the concept, we absolutely agree on enhanced unemployment, we want to fix the issue."

The Treasury secretary on Sunday also highlighted another contentious issue in the talks: additional funding for local and state governments.

"The Democrats right now are insisting on over a trillion dollars to state and local governments that's something that we're not going to do, to bail out those who had financial issues," he said.

Mnuchin had told reporters following talks on Saturday that "there's clearly a subset of issues where we both agree on," listing an extension of unemployment insurance, schools, the Paycheck Protection Program and jobs. But the House Speaker had made clear that Democrats are not interested in a short-term fix.

Pelosi said Sunday that many in her caucus would like to see a package that lasts through September or June of next year, but she just wants to make it through the appropriations process in January.

"What are we going to do? Come back to the table and do this in two or three months again? No. Let's give this the courtesy and the certainty of some assurance that this support will be there," she said in an interview on MSNBC.

Schumer, though, expressed optimism on Sunday, saying that while "significant" divisions remain, "good progress" was made in discussions with the White House.

"We made good progress, there are lots of things that we're still divided on, and we're not close to an agreement yet, but we are making progress and I'm hopeful that we can get to an agreement," he told reporters in New York City after arriving from Washington, DC.

"We will meet again tomorrow, and I am working as hard as I can to get this done," he said.