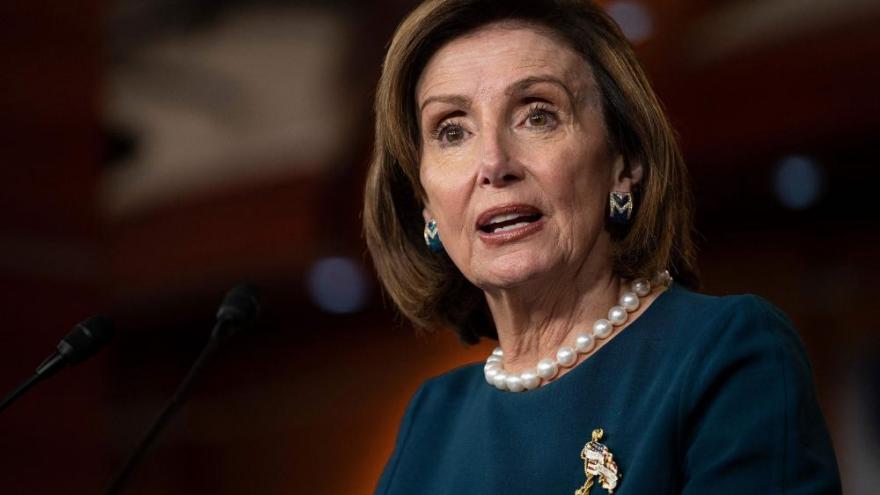 House Speaker Nancy Pelosi, in a major shift, announced on November 3 that four weeks of paid family and medical leave will be added back into the social spending bill.

(CNN) -- House Speaker Nancy Pelosi, in a major shift, announced Wednesday that four weeks of paid family and medical leave will be added back into the social spending bill, after Democrats had previously scrapped the provision from the package.

The California Democrat is pushing for a vote on both the $1.75 trillion social spending bill and the $1.2 trillion bipartisan infrastructure bill on Thursday, according to Democrats familiar with the matter, though that plan is unlikely due to some members' desire for more time to study the legislation as well as get more information from the Congressional Budget Office. House Majority Leader Steny Hoyer, a Maryland Democrat, noted in his schedule for Thursday that it was possible the House could take up both bills, after weeks of negotiation and shifting dates for votes on Biden's economic agenda.

Adding a version of the leave policies back into the package brings back to life a central and popular plank of President Joe Biden's initial proposal, and comes as Democrats try to unify over their messaging after suffering a significant loss in the Virginia governor's race.

Pelosi's move suggests a shift in strategy: Adding policies in the bill that can help it in the House -- such as paid leave -- only to have it stripped in the Senate. So the bills will likely have to ping pong and be sent back to the House once the Senate changes it.

Pelosi had insisted for months, including to CNN just this week, she would only move a bill that can pass the Senate. She wanted to spare her moderates a tough vote twice, though that no longer seems to be the case.

In her Dear Colleague letter announcing the decision, Pelosi said paid family and medical leave are being added back into the bill, but also said she is committed to only passing a bill in the House that can also pass the Senate.

"(Because) we must have legislation agreed to by the House and the Senate in the final version of the Build Back Better Act that we will send to the President's desk, we must strive to find common ground in the legislation," Pelosi writes. "As we are reviewing priorities and at the urging of many Members of the Caucus, I have asked the Ways and Means Committee for its legislation for Paid Family and Medical Leave to be included in this morning's hearing."

Pelosi also said there would be a Rules committee hearing later Wednesday on the social spending bill, known as the Build Back Better Act.

Democrats had previously scrapped the family leave provision after failing to reach a compromise with key moderate Democratic Sen. Joe Manchin of West Virginia, who had several objections to the measure -- a position he reiterated Wednesday.

Last week, Manchin made clear he would not budge on his position on the provision, telling reporters, "I just can't do it."

Pelosi said in her letter Wednesday that Democrats "must strive to find common ground in the legislation."

The decision from Pelosi, given Manchin's previously stated position, suggests she is shifting her strategy of only having a bill that can pass both the House and Senate.

Behind closed doors, Pelosi outlined to her caucus why she changed her plans, a source in the room told CNN. Pelosi told Democrats that they can't let this process go on forever and have to freeze the design at some point, according to the source.

Pelosi argued that Democrats should not keep out popular provisions just because Manchin is against them, and if she were to only put a bill on the floor that worked for the West Virginia Democrat, a lot more programs would have to be taken out, the source added.

Pelosi has said she wanted the House to vote on the economic agenda bill and a separate bipartisan infrastructure bill, that has already passed the Senate, by the end of this week.

Henry Cuellar, a Texas Democrat and member of the moderate Blue Dog Caucus, told CNN he disagrees with how Pelosi reversed her decision and changed her strategy in how she plans to move the Build Back Better bill.

"It does," Cuellar told CNN when asked if the strategy shift concerns him. "Because for months and months in the agreement she gave us, that we would not move anything unless it had the 50 votes. The rationale that was given was very simple — we're at 95%, so why don't we just move it, and if it's changed on the Senate side, then we move over. So the question is, will that 5% be something that will be troubling to a lot of us."