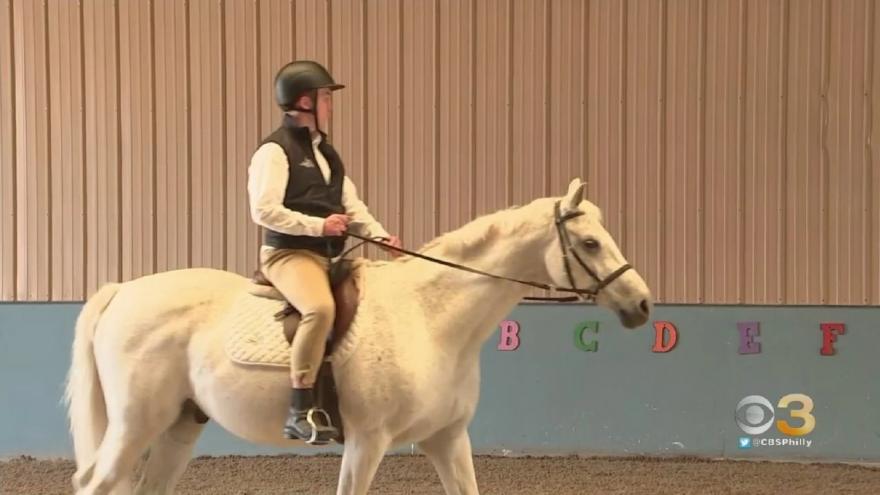 PHILADELPHIA, Pennsylvania (KYW) -- A local program is celebrating four decades of helping people with Autism through horse therapy. Eyewitness News is taking you to Pegasus Riding Academy in Northeast Philadelphia.

This trot around the arena is anything but ordinary for 18-year-old Brandon Budd and his horse Rafino. Brendan has Autism.

Brendan tells CBS3 he feels confident when he is on a horse.

He’s been riding for seven years at Pegasus Academy and through horse therapy has developed skills, including focus and sequencing.

“When Brendan and I first started working together we had a really hard time with building, first we do this and then we do that and over the years we’ve been able to build it to memorize 10-step patterns,” Executive Director Teresa Fletcher said.

Executive Director Teresa Fletcher says Brendan has become independent enough to prep and walk his own horse, even competing at the Devon Horse Show and that horses and people are naturally a good fit.

“Horses have a three-dimensional swing gate so their motion action mimics ours which helps a lot of our riders focus because of that repetitive motion,” Fletcher said.

Brendan’s grandfather, Rich, who first introduced his grandson to Pegasus has seen a positive change.

“He has responsibilities with the horse and I think he enjoys it,” Rich said.

After a long day of practice, Brendan showed CBS3 how his partner unwinds.

He says the horse likes beers.

Yes, Rafino was kicking back two cold ones.

Apparently, it’s an old cowboy trick. If you’re horse can’t sweat, you give them beer and it helps them sweat faster.