UPDATE: At least 6 crushed to death in pedestrian bridge collapse in Florida 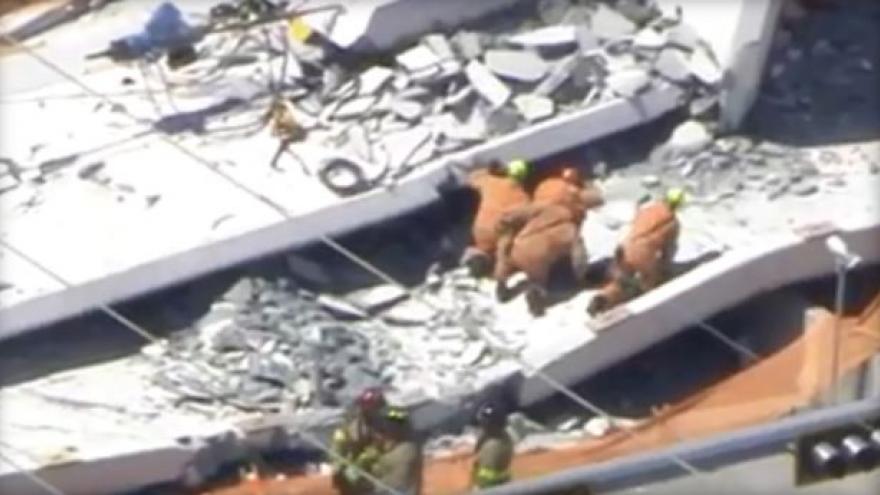 MIAMI (AP) — Authorities said Friday that the cables suspending a pedestrian bridge were being tightened after a "stress test" when the 950-ton concrete span collapsed over traffic, killing at least six people only days after its installation was celebrated as a technological innovation.

As state and federal investigators worked to determine why the five-day-old span failed, Florida politicians pointed to the stress test and loosened cables as possible factors, and a police chief asked everyone not to jump to conclusions.

"This is a tragedy that we don't want to re-occur anywhere in the United States," said Juan Perez, director of the Miami-Dade police. "We just want to find out what caused this collapse to occur and people to die."

A Florida International University student was among the fatalities, and several construction workers were among the 10 people injured. One person died at a hospital, and Perez said five bodies were located with the help of cameras but not yet retrieved from vehicles crushed under the immense slab. No identities have been released.

"We're not even going to talk numbers anymore because we expect to find other individuals down there," Perez said.

Miami-Dade Mayor Carlos Gimenez said crews had conducted a "stress test" on the span earlier in the day, and Sen. Marco Rubio tweeted that the engineering firm involved had ordered the tightening of cables that had become loosened. "They were being tightened when it collapsed," Rubio said on Twitter Thursday night.

Experts from the National Transportation Safety Board and the Occupational Safety and Health Administration joined police in taking over command of the scene Friday from first responders, who had spent hours racing to find survivors in the rubble of the 175-foot span using high-tech listening devices, trained sniffing dogs and search cameras.

The $14.2 million pedestrian bridge was supposed to open in 2019 as a safe way to cross six lanes of traffic between the FIU campus and the community of Sweetwater, where many students live.

Florida Gov. Rick Scott said Thursday that investigators will get to the bottom of "why this happened and what happened," and if anyone did anything wrong, "we will hold them accountable."

Rubio, who is an adjunct professor at the school, noted the pedestrian bridge was intended to be an innovative and "one-of-a-kind engineering design."

When finished, the bridge would have been supported from above, with a tall, off-center tower and cables attached to the walkway. That tower had not yet been installed, and it was unclear what builders were using as temporary supports.

An accelerated construction method was supposed to reduce risks to workers and pedestrians and minimize traffic disruption, the university said. The school has long been interested in this kind of bridge design; in 2010, it opened an Accelerated Bridge Construction Center to "provide the transportation industry with the tools needed to effectively and economically utilize the principles of ABC to enhance mobility and safety, and produce safe, environmentally friendly, long-lasting bridges."

Robert Bea, a professor of engineering and construction management at the University of California, Berkeley, said it was too early to know exactly what happened, but he called it a risky move to use what the bridge builders called an "innovative installation" over a heavily traveled thoroughfare.

"Innovations take a design firm into an area where they don't have applicable experience, and then we have another unexpected failure on our hands," Bea said after reviewing the bridge's design and photos of the collapse.

The project was a collaboration between MCM Construction, a Miami-based contractor, and Figg Bridge Design, based in Tallahassee. Figg is responsible for the iconic Sunshine Skyway Bridge across Tampa Bay.

Both companies have been involved in bridge collapses before.

FIGG was fined in 2012 after a section of a bridge it was building in Virginia crashed onto railroad tracks and injured several workers, according to a story in The Virginian-Pilot.

MCM, meanwhile, was accused of substandard work in a lawsuit filed this month by a worker injured when a makeshift bridge MCM built at Fort Lauderdale International Airport collapsed under his weight. Another dispute resulted in a $143,000 judgment against MCM over an "arguable collapse" at a Miami-Dade bridge project.

A review of OSHA records, meanwhile, shows MCM has been fined for 11 safety violations in the past five years totaling more than $50,000 after complaints involving its Florida work sites.

Both companies expressed condolences for the victims and promised cooperation with investigators.

Local The FIU community, along with Sweetwater and county officials, held a "bridge watch party" on March 10 when the span was lifted from its temporary supports, rotated 90 degrees and lowered into what was supposed to be its permanent position.

FIU President Mark Rosenberg in a video shared on Twitter Friday that the "tragic accident of the bridge collapse stuns us, saddens us."

"The bridge was about collaboration, about neighborliness, about doing the right thing," he said. "But today we are sad and all we can do is promise a very thorough investigation in getting to the bottom of this and mourn those who we have lost."MIAMI (AP) — Authorities said Friday that the cables suspending a pedestrian bridge were being tightened after a "stress test" when the 950-ton concrete span collapsed over traffic, killing at least six people only days after its installation was celebrated as a technological innovation.

MIAMI (AP) -- The Latest on the deadly collapse of a pedestrian bridge at Florida International University (all times local):

Miami-Dade Police say the death toll is up to six people in the collapse of a pedestrian bridge to Florida International University.

Det. Alvaro Alvaro Zabaleta says the operation has turned from rescue to recovery.

He says they can't yet release any information about the victims. He says 10 people were initially hospitalized.
The bridge was not opened yet when it collapsed on vehicles waiting in traffic.The Latest: 6 dead in pedestrian bridge collapse in Florida5:50 a.m.

Miami-Dade Police say the death toll is up to six people in the collapse of a pedestrian bridge to Florida International University. Det. Alvaro Alvaro Zabaleta says the operation has turned from rescue to recovery.

He says they can't yet release any information about the victims. He says 10 people were initially hospitalized.

The bridge was not opened yet when it collapsed on vehicles waiting in traffic.The Latest: 6 dead in pedestrian bridge collapse in Florida

At least one person was taken as a trauma alert to the hospital, according to Miami-Dade Fire Rescue.

Aerial footage shows vehicles stuck underneath the 950-ton bridge. First responders were seen placing one victim in an ambulance.

"Me and my boyfriend had just driven under the bridge," witness Isabella Carrasco told CBSN. "We actually commented on how new it was ... We had heard a loud bang. At first, we thought we had hit something, and when we looked around, we realized the bridge had collapsed. When we looked around we saw that it was much, much worse." 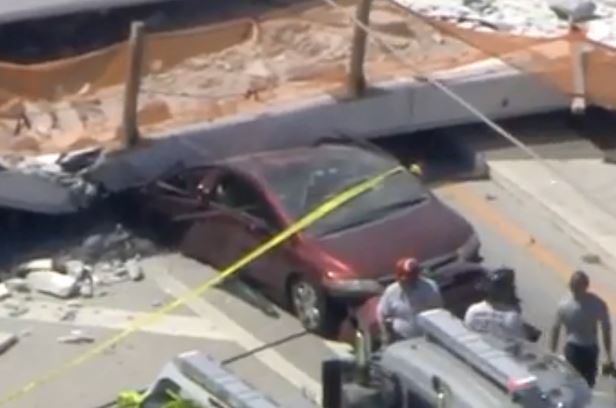 Construction of the bridge, which cost $14.2 million, was expected to finish in early 2019.