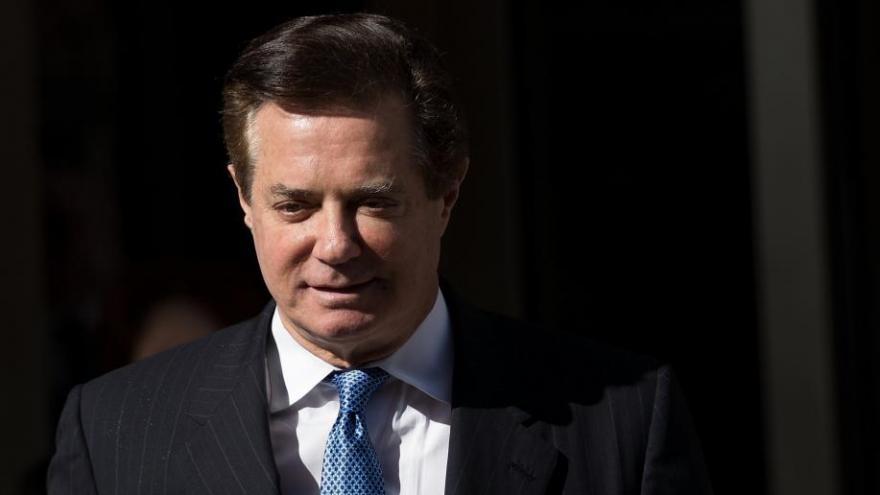 A federal judge will sentence Paul Manafort for defrauding banks and the government and failing to pay taxes on millions of dollars in income he earned from Ukrainian political consulting -- charges that stemmed from special counsel Robert Mueller's investigation into Russian interference in the 2016 presidential election.

(CNN) -- Lobbyist and former Trump campaign chairman Paul Manafort learned on Thursday that he will serve almost four years in prison -- far short of what had been expected and recommended -- for financial fraud convictions obtained by special counsel Robert Mueller as he investigated Manafort's alleged collusion with the Russian government in 2016.

The crimes, though serious among white-collar offenses, did not relate directly to Manafort's work as Trump's 2016 campaign chairman.

Manafort, 69, had been facing up to 25 years in prison, a sentence that could have essentially kept him in jail for the rest of his life.

Even at just under four years, the sentence is the longest given yet to any defendant in the Mueller probe.

It nearly concludes a two-year downfall that began when Manafort's financial ties to Ukraine came under scrutiny while he led Trump's presidential campaign. Since then, Manafort, previously known for his jet black hair, expensive suits and Republican connections, has turned gray and physically declined.

The federal judge who sentenced him on Thursday noted Manafort had committed serious crimes and has suffered in jail. The amount of time he received was "just," Judge T.S. Ellis said.

However, the sentence fell decades below what the court's own recommendation had been and what the prosecutors supported. Prosecutors in court said they hoped the sentence would be "substantial."

Ellis said he thought that 19- to 25-year recommendation was excessive.

"Life is making choices, Mr. Manafort, and living with the choices you make," Ellis said before he delivered Manafort's sentence on Thursday at a Virginia courthouse. "You made choices to engage in criminal conduct."

Manafort was convicted last summer for defrauding banks and the government, and for failing to pay taxes on millions of dollars in income he had earned from Ukrainian political consulting.

He had long been a target of federal investigators and Mueller's team -- and was expected to be a star cooperator in Mueller's probe when he pleaded guilty last September following a conviction at trial. That cooperation fell apart soon afterward, however, and prosecutors moved Manafort toward learning his two sentences from separate judges.

He'll receive a sentence from the other federal judge next week, for the two crimes he pleaded guilty to last year -- witness tampering and conspiracy related to years of illegal Ukrainian lobbying and money laundering -- which could stack on top of the time he received Thursday.

Before he was sentenced Thursday evening, Manafort spoke briefly in court about how prayer and faith helped him. He asked the judge "to be compassionate."

"The person that I have been described as in public is not someone I recognize," said Manafort, who was wearing a green inmate uniform, to the judge. "To say that I feel humiliated and ashamed would be a gross understatement," he said. He's also felt pain watching his family suffer, he added.

Manafort did not explicitly express regret for his crimes in court on Thursday, which the judge noted later.

"It wasn't information we didn't know," Andres said. "The reason he met for 50 hours was because he lied."

While the judge read the sentence, Manafort and his wife, Kathleen, who was watching in the packed courtroom gallery, barely reacted. Throughout the three-hour hearing, Manafort had been stoic, seated in a wheelchair because of gout in his legs, his eyes cast down, shoulders hunched and hands in his lap. After the hearing ended, Manafort's eyes appeared bloodshot as he was wheeled out of the room, back into custody.

Manafort has been held in solitary confinement for nine months for his own safety, after he violated his bail terms by contacting possible witnesses in his case.

He will receive credit for the nine months he has been in jail, the judge said on Thursday.

His defense attorneys have requested that he serve his sentence at a prison camp for federal inmates in Cumberland, Maryland.

Manafort will also have to pay restitution of at least $6 million for taxes he never paid. Depending on the government's forfeiture proceeding, that amount could go as high as $25 million, Ellis said. Manafort also must pay a fine of $50,000, and he will serve three years of supervised release following his prison time.

Manafort has already turned over several of his homes and apartments to the federal government. Yet he is still a rich man, and has millions left in home equity and investments, prosecutors noted Thursday.

Ellis said during Thursday's hearing that Manafort is not being sentenced for anything related to interference in the 2016 election.

"He is not before the court for anything having to do with colluding with the Russian government," the judge said.

But in many ways, the Manafort case -- which reached back almost a decade to track the movement of money from his Ukrainian political consulting work, through the time he was broke and working for Trump in 2016 -- has shaped Mueller's actions for almost two years.

Manafort's was the first indictment Mueller announced in late 2017 and his team used the criminal prosecution to ratchet up pressure on him throughout 2018 as it sought his cooperation on matters central to the probe. At one point, after securing Manafort's longtime deputy Rick Gates as a witness against him, prosecutors split his case in two, putting the more clear-cut financial crimes indictment in the fast-moving Northern Virginia federal court. Manafort's conviction at trial was a major win for Mueller -- the only official certification from an impartial group of citizens that Mueller had uncovered major crime.

"What you saw today is the same thing that we said from day one," Manafort's defense attorney Kevin Downing told the press after Thursday's sentencing hearing. "There is absolutely no evidence that Paul Manafort was involved in any collusion with any government official from Russia."

"The statement by Paul Manafort's lawyer after an already lenient sentence -- repeating the President's mantra of no collusion -- was no accident," Schiff tweeted on Thursday.

The eight crimes for which Manafort was sentenced on Thursday include five convictions of tax fraud from 2010 through 2014, hiding his foreign bank accounts from federal authorities in 2012 and defrauding two banks for more than $4 million in loans intended for real estate. At his trial, one juror refused to join the other 11 to convict him on 10 additional foreign banking and bank fraud charges. Prosecutors later dropped those counts.

Manafort did not testify in his own defense at his trial, which revealed a life of excess, even among high-rolling Washington lobbyists. He had bought ostrich and python jackets and luxury cars, and had souped up his Hamptons mansion with elaborate flowerbeds, home renovations and karaoke sets because of his secret Ukrainian stream of cash, witnesses testified.

At trial, accountants, a bookkeeper and Gates pointed to Manafort as the financial fraud mastermind.