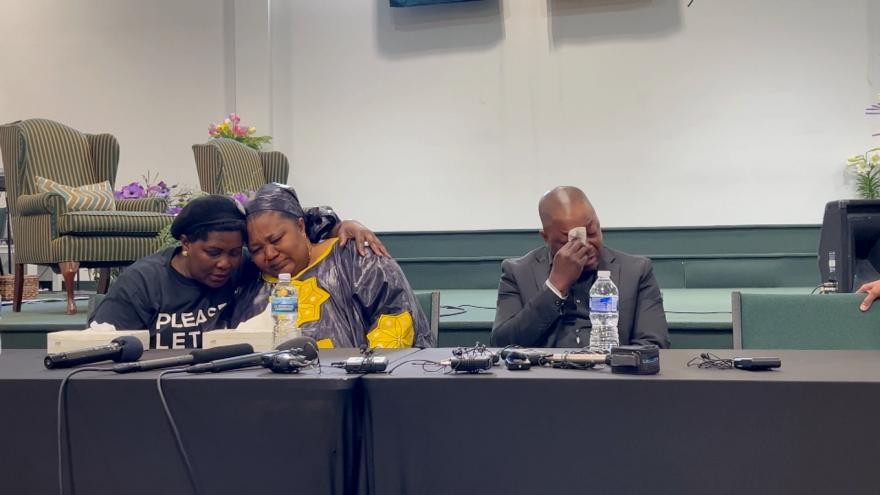 (CNN) -- A man who witnessed the struggle between Patrick Lyoya and the Grand Rapids police officer who fatally shot him told CNN on Friday he knew the incident wouldn't end well.

"I knew when the tussle began," Wayne Butler said. "If you tussle with a White man with a gun, and you're Black in America, you end up dead. That was my thing. I know that to be a fact. You don't tussle with White people because they'll kill you."

Lyoya was fatally shot April 4 in the Michigan city after he and the officer -- who has not been identified -- had a physical encounter. Lyoya's family has called for the officer to be prosecuted; the officer is on paid leave while Michigan State Police conduct an investigation.

Butler, was outside his home watching the scene unfold and can be seen with his identity blurred on some of the videos released by police.

"It's just a regular, regular neighborhood. I mean it's not super fancy, we're just regular folk," said Butler, who has lived there a few years.

He said he understands why Lyoya got out of his vehicle and didn't get back in when the officer told him to return to the vehicle.

"I don't condone it, but I do understand how someone can feel scared and not understand and be confused," said Butler. "He made a mistake. And for his mistake he paid with his life."

Authorities have said the officer pulled the car driven by Lyoya over for improper registration. Videos released to the public show Lyoya get out of the car and have a brief discussion with the officer. Lyoya opens the driver's side front door and speaks to an unidentified passenger in the car. He then shuts his door, turns his back to the officer and appears to walk toward the front of the car, according to video footage.

The encounter then turned physical.

The officer apparently deployed his Taser twice during the struggle and at points during the incident Lyoya put his hands on the Taser, the video shows.

"It looks like they each had a hand on the Taser for about 90 seconds, each had a hand," Grand Rapids Police Chief Eric Winstrom told reporters Wednesday. "They were struggling over the Taser from my view of the video."

The officer can also be heard saying, "Let go of the Taser" several times during the videos released to the public.

Father says 'My life has come to an end'

Joined by attorney Benjamin Crump, Lyoya's family spoke Thursday to reporters, his father saying he thought he'd be safe during police encounters in the US.

"What is making me cry more is to see my son killed by a police officer for a small, small mistake," Peter Lyoya said through an interpreter. "My life has come to an end."

The Lyoya family moved from the Democratic Republic of Congo to the United States in 2014.

"When we run away from war in the [Democratic Republic of the Congo], I thought that I came to a safe land," Dorcas Lyoya said through an interpreter. "And now, I'm surprised and astonished to see that my son is shot here. That is my beloved son, and you know how you love your firstborn son."

At the news conference, Crump said the officer should have de-escalated the situation.

"This video was very difficult to watch, because what you see in that video is an unnecessary and unjustifiable excessive use of force," Crump said Thursday.

"This officer failed to follow the basic training. When the officer engages Patrick he goes and puts his hands on him, and when Patrick goes to walk away he could've just stepped back and called for backup," Crump said. "When you look at him escalating the situation, [the officer] was the one being violent."

Later he told CNN; "This was a person who could have called for backup. It was a traffic stop. He had the car there. He had a passenger in the car. Patrick was in flip-flops when he was killed. You could see he was barefooted."

Police have said backup was dispatched when the officer began to chase Lyoya.

When asked Wednesday by CNN what police officers are trained to do in these situations, the chief said: "Typically the answer is that you're trying to place him in custody. ... You're trying to secure that individual.

"The follow-up question I'm sure will be, was the use of force in policy, and I'm not going to comment on that. But the test is going to be whether, in the view of a reasonable police officer, whether that deadly force was needed to prevent death or great bodily harm to that officer."

The incident began just after 8 a.m. ET on April 4, when a police officer pulled over a vehicle for improper registration, authorities said.

Grand Rapids police released several forms of video footage capturing the approximately two minute and 40 second interaction, which begins with the officer walking toward the car. Lyoya is seen exiting the vehicle and is instructed by the officer to get back in the car and asks him if he has a driver's license and whether he speaks English, the video shows.

Lyoya confirms he speaks English and says his license is in the car. He opens the driver's side front door and speaks to an unidentified passenger in the car. He then shuts his door, turns his back to the officer and appears to walk toward the front of the car, according to video footage.

"No, no, no, stop, stop," the officer is heard saying. He then puts his hands on Lyoya's shoulder and back. Lyoya is seen resisting the officer's touch and quickly backs away from the officer, running away from him before the officer tackles him to the ground and tells Lyoya to "stop resisting."

The video shows Lyoya getting up and standing, the officer drawing and then deploying a Taser.

"Let go of the Taser," the officer is heard saying on his bodycam video.

At this point, the officer's body worn camera was deactivated. Winstrom said it takes pushing a button for three seconds to turn off the body camera, and he thought pressure from Lyoya's body caused the deactivation.

Another angle of the incident, taken from a neighborhood home surveillance camera, captures the rest of the altercation. The officer is heard shooting Lyoya, according to audio from the video. The cellphone video also shows the fatal shot.

Lyoya was shot in the head, Winstrom said.

Patrick's father described his son as "nonviolent" and said he felt the officer was the one being aggressive. He also said during the event he has the right to know the name of the person who killed his son and what his history is.

Winstrom said Wednesday the officer involved in the shooting will not be identified publicly unless there are criminal charges. The officer, who has been with the department for seven years, is on paid leave and his police powers were suspended, Winstrom said.

There have been multiple protests and rallies on behalf of Lyoya. On Wednesday evening, hundreds of people called for justice as they rallied outside police headquarters.

Correction: An earlier version of this story misstated the time for the start of the incident involving Patrick Lyoya