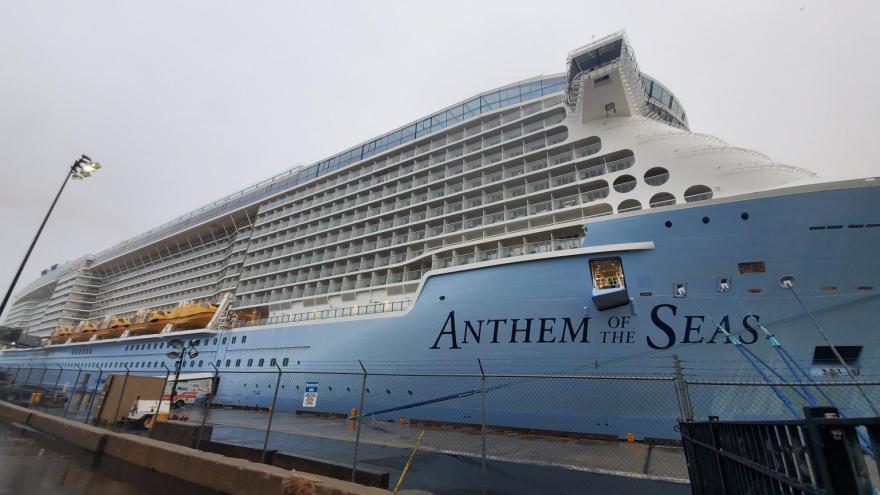 Passengers on a cruise ship that docked near New York City will be assessed in port for the coronavirus, an official with the US Centers for Disease Control and Prevention with knowledge of the situation tells CNN.

(CNN) -- Four passengers on a cruise ship that docked Friday morning near New York City were taken to a hospital for further evaluation for the coronavirus after they and others were assessed at a New Jersey port, the state's governor said.

Officials from the US Centers for Disease Control and Prevention screened 27 passengers on the ship at the port in Bayonne, a New Jersey city just south of Manhattan, Gov. Phil Murphy said in a statement. All those passengers recently had traveled to China; the other 23 were cleared.

No case of the coronavirus has been confirmed in New Jersey, and the "risk to residents remains low," Murphy said. "The hospital is following proper infection control protocols while evaluating these individuals."

None of the four passengers taken to a hospital showed "any clinical signs or symptoms of coronavirus" on board, Royal Caribbean said in a statement. One tested positive for the flu. They had not been in China since January 26.

The Royal Caribbean (RC) ship has a capacity of 4,900 passengers and 1,500 crew, but the number of people on board the vessel Friday wasn't immediately known. The hospital was not named in Murphy's statement.

The coronavirus emerged from China two months ago. It has killed 638 people, mostly in China, and paralyzed the world's second biggest economy. It has infected more than 31,000 in more than 25 countries and territories. The US has at least 12 confirmed cases, with hundreds more evacuees from China due back Friday.

Aboard the Anthem of the Seas, a pair of relatives became ill, a CDC spokesperson said. That family has been to mainland China but not to Hubei Province, where the coronavirus began spreading.

CDC staff decided to test all four members of the family in an abundance of caution after consulting with the New Jersey Department of Health, the spokesperson said. State health officials will send the family's samples to the CDC for testing.

Royal Caribbean delayed the ship's departure from 4 p.m. ET Friday to Saturday, although it had been "cleared by authorities" to depart as planned, the company said.

"We appreciate the CDC's abundance of caution," the cruise line said in its statement. "To reassure concerned guests, we will delay our departure until tomorrow, when we expect to receive conclusive test results from the CDC."

Ambulances and stretchers were positioned Friday near the Anthem of the Seas at the port at Bayonne, and personnel were boarding the ship, aerial video from CNN affiliates in New York shows.

"I have been briefed on the RC cruise ship arriving this morning," Bayonne Mayor Jimmy Davis tweeted. "I am certain that the NJ DoH, CDC, and PA NY/NJ are prepared and equipped to address any concerns this morning."

Davis later tweeted, "RC Update: Approx 2 dozen were screened this morning with 4 sent to area hosp for further screening. I was advised CDC considers this 'Below Low Risk' situation. All other passengers released w/no action needed."

Royal Caribbean is "closely monitoring developments regarding coronavirus and have rigorous medical protocols in place onboard our ships," it said in a statement.

"Like airlines, we are participating in elevated levels of guest screening to check the spread of coronavirus," the cruise line said. "We continue to work in close consultation with the CDC, the WHO, and local health authorities to align with their guidance and ensure the health and wellbeing of our guests and crew."

Passenger had 'no idea' about health assessments

Passengers have been on the ship for 12 days, traveling to San Juan, Puerto Rico; St. John's, Antigua; and St. Kitts. They were set to disembark Friday morning.

"We had no idea (about the health assessments) till we saw on (local) TV in cabin this morning," passenger Don Silberman of Connecticut said. There had been no announcement or information from the crew about the CDC assessments, he said.

Sherry Hosty, of Fredericksburg, Virginia, was in her Anthem of the Seas cabin late Thursday when she learned of coronavirus concerns related to the ship in a news story posted to Facebook, she told CNN.

"I initially was very concerned and worried that we would be quarantined," she said. "Then, after talking it through with my husband, we both assumed it was bogus because Royal Caribbean had not announced anything about this."

"We went to the buffet for breakfast, and things were happening as usual," she said. After speaking with other passengers, "we all were very surprised that we hadn't heard anything until really this morning."

Royal Caribbean did not immediately respond to CNN's questions about its passenger notification efforts.

Royal Caribbean will "be conducting enhanced sanitation in the cruise terminal and onboard, as part of our ongoing illness prevention efforts," the cruise line tweeted to passengers expected to board.

Clarification: This story has been updated to indicate that one stop was St. John's, Antigua, rather than St. John, Virgin Islands.