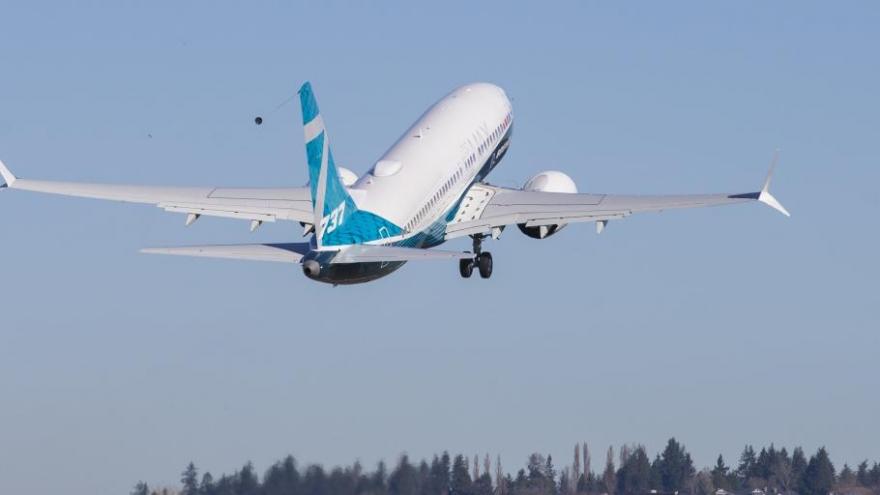 Passengers do not have many options if they are booked on flights in the United States and learn that they will be on the same model of aircraft, the 737 MAX 8, that crashed in Ethiopia over the weekend. While passengers can always choose not to get on a plane if they feel unsafe, the two major US airlines that have 737 MAX 8 planes are not grounding those aircraft or changing their standard flight cancellation, change or refund policies.

(CNN) -- Passengers do not have many options if they are booked on flights in the United States and learn that they will be on the same model of aircraft, the 737 MAX 8, that crashed in Ethiopia over the weekend. While passengers can always choose not to get on a plane if they feel unsafe, the two major US airlines that have 737 MAX 8 planes are not grounding those aircraft or changing their standard flight cancellation, change or refund policies.

An Ethiopian Airlines flight from Addis Ababa to Nairobi, Kenya, crashed Sunday morning, killing all 157 people on board, according to the airline. The flight was on a 737 MAX 8 plane made by Boeing, an American company. This is the second fatal crash of a 737 MAX 8 in the past six months.

After Sunday's crash, passengers booked on Southwest and American airlines, both US-based companies that fly the Boeing model, began asking questions on Twitter about the safety of their upcoming flights.

Southwest spokesperson Brian Parrish said they were "fielding some questions" from customers asking if they were booked on 737 MAX 8 aircraft. He said they were responding to customers individually and that they "remain confident in the safety and airworthiness of our fleet of more than 750 Boeing aircraft."

American Airlines said it continues "to collaborate with the FAA and other regulatory authorities" and that they "have full confidence in the aircraft and our crew members, who are the best and most experienced in the industry."

While some international airlines and governments grounded the 737 MAX 8 planes, a day after the crash US airlines, the Federal Aviation Administration and Boeing had not. Ethiopian Airlines and Cayman Airways both grounded the planes of that model they were operating. China and Indonesia grounded 737 MAX 8 planes in operation in both countries.

The FAA issued an airworthiness notification on Monday, saying it would mandate "design changes" to the Boeing 737 MAX 8 and 9 "no later than April 2019." The changes will be "flight control system enhancements," according to the notice. The announcement acknowledged that investigators had not yet determined the cause of the Ethiopian crash or whether it was the same cause as the earlier crash, last October. The FAA says it has a team on site in Ethiopia "collecting data."

Boeing released a statement Monday describing the software upgrade, which said in part:

"For the past several months and in the aftermath of Lion Air Flight 610, Boeing has been developing a flight control software enhancement for the 737 MAX, designed to make an already safe aircraft even safer. ... Boeing has been working closely with the Federal Aviation Administration (FAA) on development, planning and certification of the software enhancement, and it will be deployed across the 737 MAX fleet in the coming weeks. The update also incorporates feedback received from our customers. ... It is important to note that the FAA is not mandating any further action at this time."

There are about 350 Boeing 737 MAX 8's in operation worldwide, being flown by 54 operators, according to the FAA.

Passengers can look up the model of plane they are flying on for any given flight. It's often listed on boarding passes or tickets, or passengers can call and ask the airline.

If they see they would be flying on a 737 MAX 8 and they choose not to take that flight because they feel unsafe, American Airlines and Southwest Airlines both said their standard flight change policies would apply.

For American, each passenger is charged an additional fee if a change is made to the flight.

For Southwest, passengers can change their flights with no charge. Passengers pay only the difference in fare when they change flights on Southwest.

Legally, passengers do not have much recourse when it comes to changing flights free of charge or getting full refunds. FAA regulations say airlines are able to change planes "jet for jet," meaning that if it is the same class of plane and they change the specific model at the last minute, they are not required to provide any kind of refund, according to aviation attorney Mary Schiavo, a CNN transportation analyst and former inspector general at the US Department of Transportation.

Schiavo said the only option available to passengers right now is to ask the airline staff if they will change the flight and be lenient with their policies. "You're going to have to have a discussion with the counter personnel or the gate personnel, who may or may not be understanding," she said.

While the Lion Air crash in October and Sunday's Ethiopian crash are not linked beyond the fact that both planes were of the same model, CNN aviation safety analyst and former FAA safety inspector David Soucie said he would not get on a 737 MAX 8 plane today because travelers don't have enough information.

After the Lion Air crash near Jakarta, Indonesia, Boeing issued a bulletin and recommended that all pilots take training to not make the same mistake made in that crash, but the training was not made mandatory.

"The training that was recommended by Boeing after the Lion Air accident, there's no way for me to know whether the airline I'm on or the pilot that's flying had that training or not," Soucie said. "If there was a way for me to know that, then I would most definitely get on that airplane."