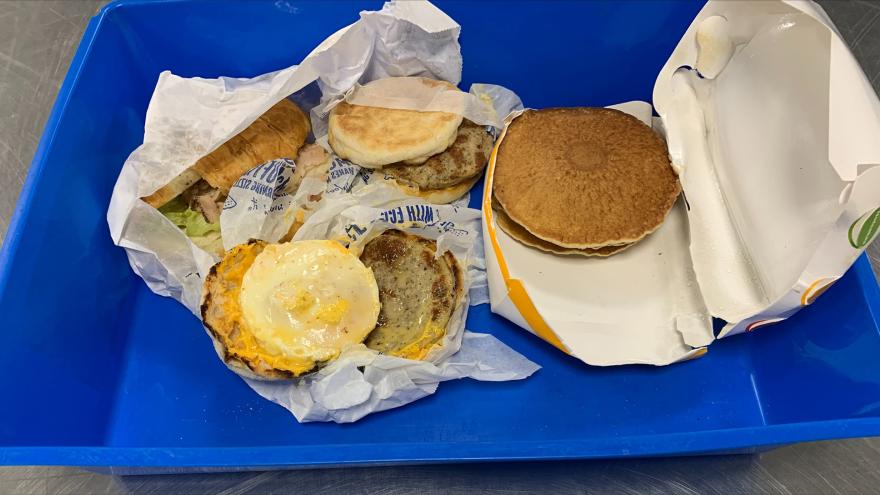 (CNN) -- A passenger traveling from Bali, Indonesia to Australia has found themselves paying a hefty price for a McDonald's breakfast.

The unnamed traveler was handed a fine of 2,664 Australian dollars ($1,874) after two undeclared egg and beef sausage McMuffins and a ham croissant were found in their luggage on arriving at Darwin Airport in the country's Northern Territory last week.

The incident came about days after Australian authorities brought in tough new biosecurity rules after a Foot and Mouth disease (FMD) outbreak in Indonesia spread to Bali, a popular destination for Australian tourists.

Australia's Department of Agriculture, Fisheries and Forestry said a "range of undeclared risk products," including the fast food items, were detected in the passenger's rucksack by a biosecurity detector dog named Zinta.

"This will be the most expensive Maccas meal this passenger ever has," Murray Watt, minister for agriculture, fisheries and forestry, said in a statement.

"This fine is twice the cost of an airfare to Bali, but I have no sympathy for people who choose to disobey Australia's strict biosecurity measures, and recent detections show you will be caught."

The statement went on to confirm that the passenger had been issued with "a 12-unit infringement notice for failing to declare potential high biosecurity risk items and providing a false and misleading document." The seized products are to be tested for foot and mouth disease before being destroyed.

"Australia is FMD-free, and we want it to stay that way," added Watt.

Last month, the federal executive government of Australia announced a $9.8 million biosecurity package, with new measures introduced across the country's borders, including sanitation foot mats at all international airports and biosecurity dogs stationed at both Darwin and Cairns Airport, after the highly contagious disease began spreading through cattle in Indonesia.

Experts estimate that an outbreak in Australia could bring about an economic hit of up to $80 billion.

"Travelers arriving from Indonesia will be under much stricter biosecurity scrutiny due to the presence of Foot and Mouth disease (FMD) in Indonesia," read a statement released by the Department of Agriculture, Fisheries and Forestry on July 19.

"Failing to declare biosecurity risks will mean a breach of Australia's biosecurity laws, and anyone found in breach could be issued with an infringement notice of up to $2,664.

"Travelers entering Australia on temporary visas may have their visas canceled and, if so, will be refused entry into Australia."

While FMD is relatively harmless to humans, it causes painful blisters and lesions on the mouths and feet of cloven-hooved animals such as cattle, sheep, pigs, goats and camels, stopping them from eating and causing severe lameness and death in some cases.

The disease can be carried by live animals, in meat and dairy products, as well as on the clothing, footwear, or even luggage of people who've come into contact with infected animals.

"The impacts on farmers if foot and mouth gets in are too gut-wrenching to even contemplate," Fiona Simson, president of the National Farmers' Federation, told CNN last month.

"But it's not just about farmers. Wiping $80 billion off Australia's GDP would be an economic disaster for everyone."