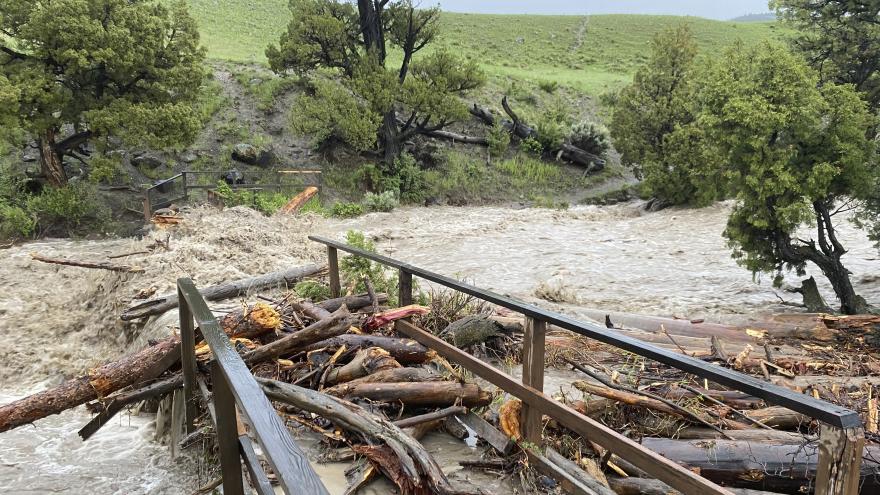 (CNN) -- While all entrances of Yellowstone National Park are temporarily closed because flooding has damaged roads and bridges, the park's northern portion in particular may remain closed for "a substantial length of time," park officials said Tuesday.

"Many sections of road in (the park's northern areas) are completely gone and will require substantial time and effort to reconstruct," a news release reads. "... It is probable that road sections in northern Yellowstone will not reopen this season due to the time required for repairs."

Dangerous flooding caused by abundant rain and rapid snowmelt began to hit the park and several counties in southern Montana on Monday, washing out or eroding roads and bridges and inflicting widespread damage on homes and businesses.

The park on Monday closed all five of Yellowstone's entrances in Montana and Wyoming to inbound traffic -- in part to prevent people from being stranded as conditions deteriorated -- with no firm date for their reopening.

And park officials told visitors already there to leave -- more than 10,000 have left the park since Monday, park Superintendent Cam Sholly said Tuesday.

Though cooler temperatures and drier weather have allowed some parts of swollen rivers to start receding, higher temperatures are expected later this week and into the weekend, which could cause more snow-melt runoff and therefore more flooding, CNN meteorologist Brandon Miller said.

"There will be no inbound visitor traffic at any of the five entrances into the park, including visitors with lodging and camping reservations, until conditions improve and park infrastructure is evaluated," the park's release reads.

Quickly deteriorating road conditions in Yellowstone created harrowing evacuations for some visitors, including the parents of CNN supervising producer Tim Carter, who had to exit over a bridge that had been compromised.

"When we were going over it, it was really scary because the water was already violently swirling around the bridge," Martha Carter said. "We did find out later that it had washed out."

Meanwhile, some surrounding communities in Montana were left without power or safe drinking water as flood conditions made it impossible or unsafe to travel and compromised water supplies.

MontanaGov. Greg Gianforte declared a statewide disaster Tuesday and announced he would seek an expedited presidential disaster declaration to help cover the cost of recovery.

The dangerous flooding is just one of several extreme weather events bearing down on communities across the US, including a blistering heat wave affecting more than 100 million people, and severe storms that have knocked out power for hundreds of thousands in the Midwest and Ohio River Valley.

Rain and snowmelt flooded rivers including the Yellowstone River, which runs northwest through Yellowstone Park in Wyoming and then north and eastward through several nearby Montana communities.

The flooding washed out parts of roads especially in the northern part of the park, and inundated south Montana homes, businesses and infrastructure Monday, forcing many families to evacuate. In the Montana city of Gardiner, a gateway to the park's northern entrance, video from witnesses showed a building collapsing into the Yellowstone River on Monday.

For some, roads and bridgs were rendered temporarily impassable by the flooding, leaving them trapped, at times without clean water or power.

The Montana National Guard used four helicopters to help with evacuations in affected areas on Monday and Tuesday and also sent soldiers to the city of Red Lodge to establish a command center for search and rescue efforts, the force said. The Guard has evacuated at least a dozen people who were stranded in the communities of Roscoe, Fromberg and Cook City, it said Tuesday.

A Montana helicopter company flew about 40 people out of Gardiner, which was temporarily isolated by flooding, Laura Jones with Rocky Mountain Rotors told CNN.

In the south Montana community of Absarokee, situated along a Yellowstone River tributary, resident Tracy Planichek and her husband had just reached their long-awaited goal of having a new home when the flood threat forced them to evacuate.

Now, she told CNN, she is desperately hoping it has avoided the destruction seen in other homes, some of which were swept away. "(We've) never been able to afford a new house," she said. "It's sitting at the top of the lane and we're hoping that by some God miracle that our house will be there."

A wave of flooding still was moving east Wednesday along the Yellowstone River, threatening more trouble in south Montana.

By early Wednesday, major flooding from the river was being reported in Billings, roughly a 175-mile drive east of Gardiner. The river in Billings rose above its previous record, 15 feet, around 4 p.m. Tuesday, said the National Weather Service.

"Exactly how high the river is is a bit unsure with flood waters impacting the gauge a bit at these higher levels, but have not seen a downturn trend yet," the service's office in Billings tweeted early Wednesday.

Fields and streets were flooded along the river Tuesday just outside Billings, images posted to Facebook by the Yellowstone County Sheriff's Office show. One picture showed two people walking in calf-deep water in a neighborhood.

The river should crest there Wednesday -- though attention will turn to high temperatures that could cause more snow melt and more flooding in the region this weekend.

Billings will approach record temperatures in the upper 90s Friday and Saturday, while the higher elevations will be in the 60s and 70s. This would be warm enough to melt the remaining snow pack and lead to additional river rises over the weekend. And more rain is possible in the area on Sunday.

A lot of rain and snow melt in only three days

What led to the flooding was substantial rainfall and snow runoff over the weekend in the Beartooth and Absaroka mountain ranges, which span across the Montana-Wyoming state line.

The combination of rain and snow melt created a "total water event of at least 4 to 9 inches," the National Weather Service in Billings said Tuesday.

That amount of runoff is similar to the region receiving two to three times a normal June's precipitation in only three days, according to CNN meteorologists.

In the park, officials had all visitors move out of lodging and campgrounds and leave the park to prevent anyone from being stranded, the National Park Service said in a news release. The park averages between 15,000 and 20,000 visitors in June, Sholly said.

The park has also closed the Yellowstone back country and has been in contact with groups in the area.

"We have contacted or know the whereabouts of every back country user currently in Yellowstone," Sholly said, noting that one group remained in the northern range. No helicopter evacuations have been necessary, he said.

No known injuries or deaths occurred in the park because of the flooding, Sholly said, and officials do not believe the animals in the park have been significantly affected.

The park's southern loop "appears to be less impacted than the northern roads" and teams will try to determine when that loop can be reopened. But officials expect even that loop to stay closed at least through Sunday, the park's release states.