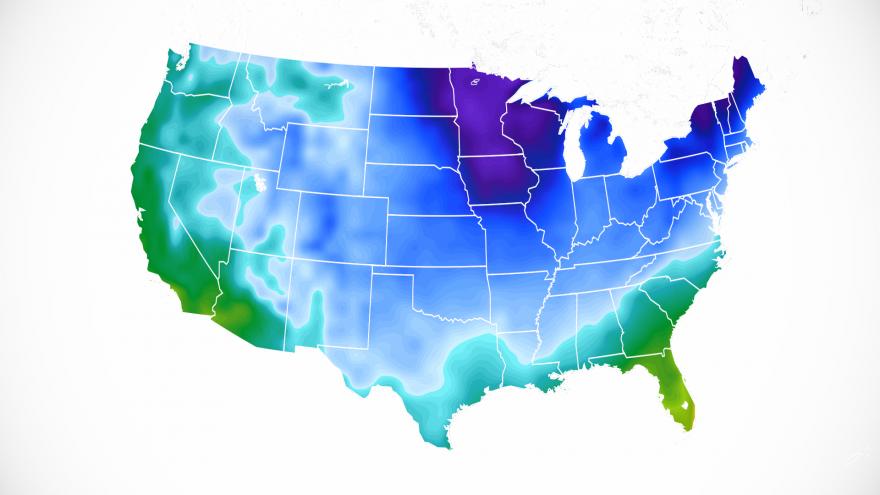 (CNN) -- Temperatures across parts of Texas will nosedive this week, from balmy highs Wednesday in the 70s and 80s to below freezing Thursday night into Friday, with the chance of a wintry mix.

Check the temperature for your town here

"75 to 35 sounds like a car manufacturer's braking power, but the numbers are not in miles per hour: It's the range of temperatures in Houston over the next few days," CNN meteorologist Chad Myers said.

And it's not just the Lone Star State headed for a Texas-size cold plunge. An extended cold front will stretch from the southern tip of that state to the northern edge of Maine, with temperatures behind it dropping well below average across the eastern half of the United States.

A quick burst of wintry precipitation could arrive along the front, including in parts of Southern states and the Mid-Atlantic socked this week by a winter storm.

"This storm and Arctic plunge are unusual for even January on how far south the cold air will push and produce winter precipitation," CNN meteorologist Dave Hennen said.

"Take Corpus Christi, (Texas,) which could touch 80 degrees today but will see plummeting temperatures and possible snow and ice by Thursday evening," he said. "On average, the city only sees ice or snow around every three or four winters."

Icy weather is possible in Texas

The good news is this doesn't look like that massive ice storm, though there is a good chance a wintry mix will develop along the cold front in southern Texas.

"Much of Deep South Texas will have a chance/slight chance of seeing a wintry mix of precipitation Thur. night into Fri. morning. Only minor ice accumulations are expected at this time," the National Weather Service office in Brownsville tweeted.

Winter storm watches cover the state's southern section, from Austin to Brownsville. That means winter weather is possible over the coming 48 hours.

"Those planning to venture outdoors should be prepared for the possibility of ice accumulations on exposed surfaces such as elevated sidewalks, as well as bridges and overpasses," the weather service office in Austin said.

Some isolated areas could see ice accumulate on roads, but it seems like most icing will be on exposed surfaces.

Meantime, snow early Thursday will impact Kentucky, including Louisville, and northern Tennessee. Nashville will see light rain turning to ice, then a light accumulation of snow, adding to its January snow total of 9.3 inches -- the most snow there in January since 1985.

Then, snow makes its way into the mid-Atlantic, just in time for the Thursday morning rush hour in Washington, DC. "A period of light snow could continue for a few hours before ending Thursday afternoon," the weather service office there said.

Though snowfall totals do not look significant, winter weather during commute hours often can cause problems.

New York also is likely to see rain turning to snow as the front moves through Thursday morning. "The area will then see several hours of light snow during the morning commute and into the early afternoon," the New York weather office said Wednesday morning.

Only a couple inches is currently forecast.

Coastal Carolina could also get ice

Along the same cold front, freezing rain could fall Thursday night into Friday in the Carolinas, with significant icing possible Friday across eastern North Carolina.

"You don't see this everyday.. A Winter Storm Watch for the eastern Carolinas and south Texas," tweeted the Greenville, South Carolina, weather office.

Winter storm watches have been issued for parts of South Carolina and North Carolina. Sleet totals could add up to 2 inches, and ice could thicken to one-10th to three-10ths of an inch.

"Power outages and tree damage are likely due to the ice," the National Weather Service office in Raleigh, North Carolina, said. "Travel could be nearly impossible."

The biggest risk for winter precipitation along the coast comes Friday night into Saturday. A low-pressure center off the coast could usher moisture off the Atlantic into the cold air, allowing a wintry mix to fall into Saturday morning in places like Myrtle Beach and Charleston, South Carolina.