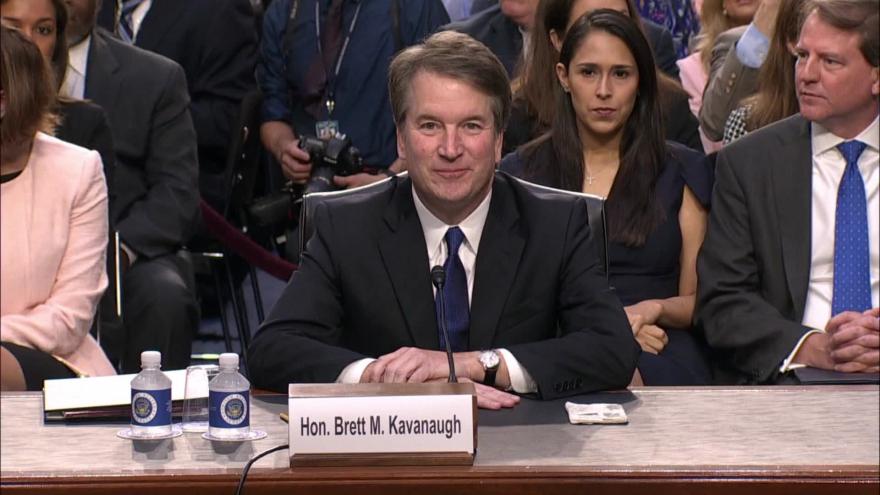 WASHINGTON (AP) — Quarreling and confusion marked the Senate hearing Tuesday for Supreme Court nominee Brett Kavanaugh, with politically charged arguments about White House documents and confirmation rules getting as much attention as the role the conservative judge will likely play in shaping rulings on abortion, executive power and other national issues.

The strong opposition to President Donald Trump's nominee reflected the political stakes for both parties just two months before congressional elections. Democrats, including several senators poised for 2020 presidential bids, tried to block the proceedings over Kavanaugh records withheld by the White House. Republicans in turn accused the Democrats of turning the hearing into a circus. And protesters shouted out frequent and persistent disruptions from the audience.

In his opening remarks, released ahead of delivery, Kavanaugh sought to tamp down the controversy over his nomination, which would likely shift the closely divided court to the right. He promised to be a "team player" if confirmed, declaring that he would be a "pro-law judge" who would not decide cases based on his personal views.

But Democrats raised objections from the moment Chairman Chuck Grassley gaveled the committee to order. One by one, Democrats, including Kamala Harris of California, Cory Booker of New Jersey and Amy Klobuchar of Minnesota, all potential presidential contenders, demanded that Republicans delay the hearing. They railed against the unusual vetting process by Republicans that failed to include documents from three years Kavanaugh worked in the George W. Bush administration, and 100,000 more pages withheld by the Trump White House. Some 42,000 pages were released on the evening before of the hearing.

"We cannot possibly move forward, Mr. Chairman, with this hearing," said Harris at the top of proceedings. Grassley disagreed.

As protesters repeatedly interrupted the session, Republican Sen. Ted Cruz, who is fighting for his own re-election in Texas, apologized to Kavanaugh for the spectacle he said had less to do about the judge's legal record than Trump in the White House.

"It is about politics," said Cruz. "It is about Democratic senators re-litigating the 2016 election."

Republicans' slim 51-49 majority in the Senate was bolstered during the hearing by the announcement from Arizona that Gov. Doug Ducey was appointing Jon Kyl, the former senator, to fill the seat held by the late Sen. John McCain. With majority Republicans appearing united, Democrats appear to have dim prospects of blocking Kavanaugh's confirmation.

Kavanaugh sat silently, occasionally sipping water and taking notes on senators' points. He was invited to introduce his parents, wife and children, who sat through much of the outbursts before being escorted out of the room. Also present were outgoing White House Counsel Don McGahn and Deputy Attorney General Rod Rosenstein.

At the start of proceedings, Sen. Richard Blumenthal, D-Conn., made several motions to adjourn, saying if the confirmation continued, "this process will be tainted and stained forever."

Grassley denied multiple requests to postpone, defending the document production as the most open in history. He said the chaotic scene was something he'd "never gone through" in 15 past confirmation hearings.

More than two dozen protesters, shouting one by one, disrupted the hearing at several points and were removed by police. "This is a mockery and a travesty of justice," shouted one woman. "Cancel Brett Kavanaugh!" Others shouted against the president or to protect abortion access. "Senators, we need to stop this," called out one.

As patience thinned and tempers flared, Sen. John Cornyn, R-Texas, denounced what he called the "mob rule." Struggling to speak over protesters, Sen. Orrin Hatch, R-Utah, said: "These people are so out of line they shouldn't be in the doggone room."

Sen. Dick Durbin, D-Ill., told Kavanaugh that the unprecedented opposition being shown at the hearing reflected the concern many Americans, have over Trump's "contempt of the rule of law" and the judge's own expansive views on executive power.

"It's that president who's decided you are his man," Durbin said. "Are people nervous about this concerned about this? Of course they are."

"These are very unique circumstances. Not only is the country deeply divided politically, we also find ourselves with a president who faces his own serious problems," she said referring to investigations surrounding the president. "So it's this backdrop that this nominee comes into."

In prepared opening remarks, Kavanaugh declared he would be even-handed in his approach to the law.

"A good judge must be an umpire, a neutral and impartial arbiter who favors no litigant or policy," Kavanaugh said. "I would always strive to be a team player on the Team of Nine."

The Supreme Court is often thought of as nine separate judges, rather than a team. And on the most contentious cases, the court tends to split into conservative and liberal sides. But justices often say they seek consensus, and they like to focus on how frequently they reach unanimous decisions.

Kavanaugh, 53, has served for the past 12 years on the federal appeals court in Washington, D.C., and conservative record includes a dissenting opinion last year that would have denied immediate access to an abortion for an immigrant teenager in federal custody.

At particular issue for senators are documents from the years Kavanaugh worked in key positions in the Bush White House and a member of independent counsel Kenneth Starr's legal team that investigated President Bill Clinton in the late 1990s, leading to Clinton's impeachment.

Those years produced an unusually long public record. Republicans in the Senate only sought to review his years in the White House counsel office, rather than his three years as staff secretary, which Democrats say could shed light on his view on key Bush-era policies including the detention and interrogation of terror suspects, same sex marriage and other issues.

Rebuffed in their request to delay the hearing, Democrats are planning to shine a light on Kavanaugh's views on abortion, executive power and whether Trump could be forced to testify as part of special counsel Robert Mueller's Russia investigation.

Many Democratic senators already have announced their intention to vote against Kavanaugh and many Republicans have likewise signaled their support. A handful of Democrats seeking re-election in states Trump carried in 2016 could vote for Kavanaugh.

Sens. Susan Collins of Maine and Lisa Murkowski of Alaska are the only two Republicans even remotely open to voting against Kavanaugh, though neither has said she would do so. Abortion rights supporters are trying to appeal to those senators, who both favor abortion access.

Democrats have been under intense pressure from liberal voters to resist Trump, and many remain irate, even two years later, over the treatment of Merrick Garland, President Barack Obama's nominee for the Supreme Court. Garland was denied so much as a hearing last year by Majority Leader Mitch McConnell.

Kavanaugh worked for Justice Anthony Kennedy, who retired at the end of July. Questioning of Kavanaugh will begin Wednesday, and votes on the Senate floor could occur this month. Kavanaugh could be on the bench when the court begins its new term on Oct. 1.