Part of fencing perimeter comes down around White House 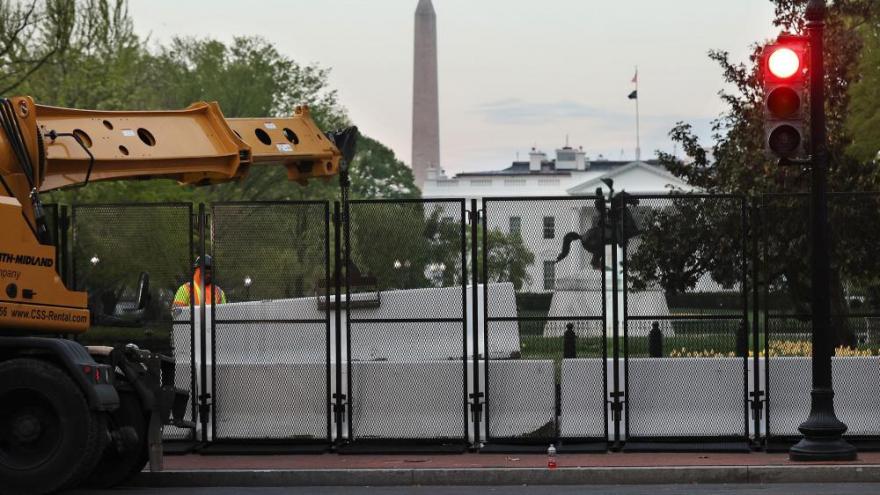 Workers remove or reconfigure sections of the fence surrounding the White House and nearby administration buildings on April 14 in Washington, DC.

(CNN) -- Part of the fencing perimeter that has been around the White House complex since President Donald Trump was in office was removed on Wednesday morning.

CNN observed crews taking down metal fencing that had been around the perimeter of the White House complex for months. Not all of the fencing was removed and most of the area remains closed to the public.

The fencing, which was reinforced with concrete barriers, was put in place on January 13, a week after the deadly insurrection at the US Capitol, which resulted in enhanced security at the White House and US Naval Observatory, where the vice president resides. Five people, including a Capitol Police officer, were killed when Trump supporters stormed and breached the US Capitol on January 6.

A wide perimeter of fencing was first installed following protests outside the White House after the death of George Floyd in June. Floyd died after a Minneapolis police officer knelt on his neck, which sparked protests against police brutality and racism in the US across the nation.

The perimeter was established after federal law enforcement used force to clear protesters from Lafayette Square outside the White House. Then-President Donald Trump visited nearby St. John's Church in the moments following that incident, and much of the area has been closed ever since.

The fencing perimeter that spanned multiple blocks on 17th Street NW has been fully removed, CNN has observed, and a smaller perimeter of fencing remains at the intersection of 17th Street and Pennsylvania Avenue, where staff and press access the White House. That fencing is reinforced by concrete barricades.

A spokesperson for the US Secret Service said they would not discuss details related to the fencing due to security concerns.

White House press secretary Jen Psaki said in February the Secret Service would be taking the lead on when the fencing would come down.

"Our goal, the President and the vice president's goal, is for the Secret Service to adjust the perimeter as soon as it makes sense from an overall security standpoint," Psaki said. "So, we're working closely with them on that and they, of course, would be in the lead on that."