Park workers found a goldfish in a lake. A 9-pound goldfish 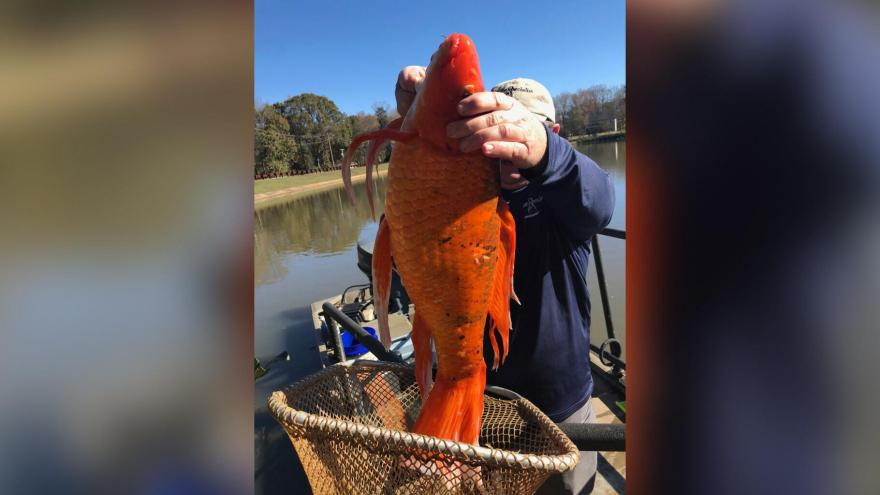 This massive goldfish was found in a South Carolina lake, then released back into the water.

(CNN) -- Parks and recreation workers in South Carolina made an extraordinary discovery during a routine water quality test at a small lake.

The crew caught a 9-pound goldfish that was about 15 inches long in the murky waters of Oak Grove Lake, said Ty Houck, director of Greenways, Natural and Historic Resources for the Greenville County Recreation District.

That's a whopper of a goldfish. National Geographic says the average weight for a pet goldfish is .2 to .6 pounds, though they can top 5 pounds in the wild. The average length is 4.7 to 16.1 inches.

Houck said he has no clue how long the fish, which is not native to South Carolina, has been in the lake in the upper part of the state. He told CNN the team didn't see anything resembling a goldfish when they last studied the lake a decade ago.

In order to test the health of the ecosystem, officials use a method called electrofishing, which gently shocks the fish (without hurting them) and forces them to float to the surface of the water so surveyors can check for any signs indicating unhealthy water, Houck said.

"All of a sudden this giant fish jumped out and into the net and we quickly snapped a photo while examining it," Houck said.

Houck said the lake is mainly used for fishing, though fisherman are encouraged to throw the fish back after catching them. That's what the parks workers did with the big goldfish.

"We think someone must have just dropped their fish in the lake because they didn't want it anymore, instead of flushing it down the toilet," Houck said.

The lake is not downstream from any nuclear power plants, so the large size has nothing to do with chemical exposure, Houck said. He speculated omnivorous goldfish has just been eating a lot and had the opportunity to grow when it entered a larger physical environment, like the 12-acre Oak Grove Lake.

The Guinness Book of World Records says the longest known goldfish measures 18.7 inches from nose to fin and belongs to Joris Gijsbers of the Netherlands. The weight, however, was not listed.

"Goldfish grow to the size of their environment," Houck said. "To have a 9-pound goldfish survive in our lake must mean we are doing something right."