Park ranger was telling a crowd to social distance. Mid-speech, someone pushed him into a lake 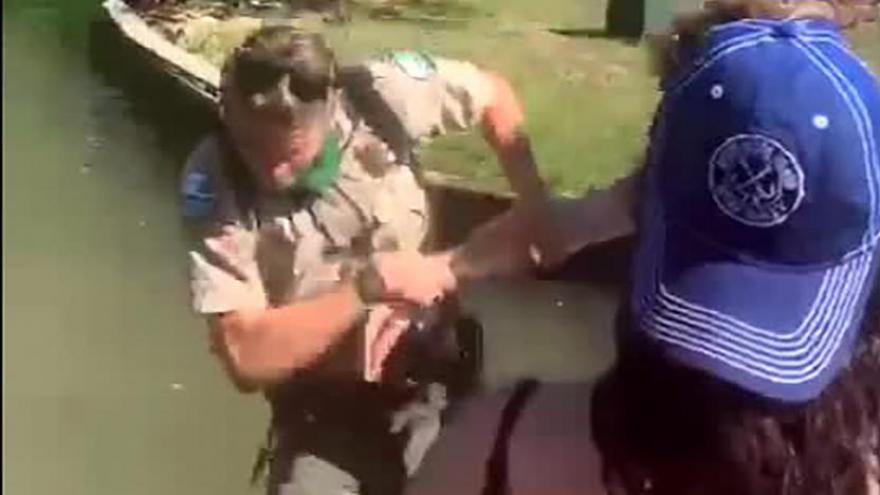 A screen grab from the video provided to CNN by an eyewitness. Brandon Hicks is accused of shoving a park ranger into the water while the ranger was explaining to a crowd the need for social distancing.

(CNN) -- A man accused of shoving an Austin, Texas, park ranger into the water while the ranger was explaining to a crowd the need for social distancing is embarrassed by his actions, his lawyer said.

A video that gained attention after it was posted on social media includes the moment a young man pushes the ranger into a lake at Commons Ford Ranch Metro Park last Thursday afternoon.

According to an arrest affidavit, ranger Cassidy Stillwell was talking to a crowd of people, described as "unlawfully drinking and smoking," on a dock near Lake Austin. It's unclear from the affidavit whether Hicks was part of that group mentioned in the affidavit.

Amid the cross talk in the video, Stillwell is heard telling the crowd on the dock to "disperse yourselves" in the grassy area nearby because they were not maintaining physical distance of six feet. Some respond with "Will do" and "I got you, man."

The ranger's instructions are interrupted when the man pushes him into the shallow, murky water. The ranger holds on to the man's arm and pulls him in, the video shows. The man, clad in a swimsuit, scrambles out of the water and rushes away.

Attorney Mark Hull told CNN in a statement Monday he looks forward to telling Hicks' side of the story.

"He is embarrassed about his actions and has the utmost respect for law enforcement, particularly during these unprecedented times," Hull said.

An eyewitness who shot the video said that park visitors were closer to each other than they should have been.

"(The ranger) was just telling us to spread apart to keep our distance and honestly was being super reasonable and understanding," said the witness, who did not want to be named.

The officer who submitted the affidavit said the ranger could have struck his head on the dock as he was falling, "and render himself unconscious in at least 3 feet of water where he could have drowned to death."

Kimberly McNeeley, director of parks and recreation for Austin, said public support is essential for employees to meet the challenges of the pandemic.

"We ask that the public treat rangers with the same respect they wish to be shown to themselves," she said in a statement.

Hull says his client is out on $7,500 bond and his next court date is June 19. He said it was too early in the case to determine how Hicks will plea. A person found guilty of a state jail felony faces a sentence of 180 days to two years.

CNN reached out Monday to the Travis County district attorney but not receive an immediate reply.

As a result of the incident, rangers have been told to approach groups in teams of two, said city parks communications and engagement manager John Nixon.