Parents on TikTok mock people with disabilities for the 'New Teacher Challenge.' These women are reclaiming their images 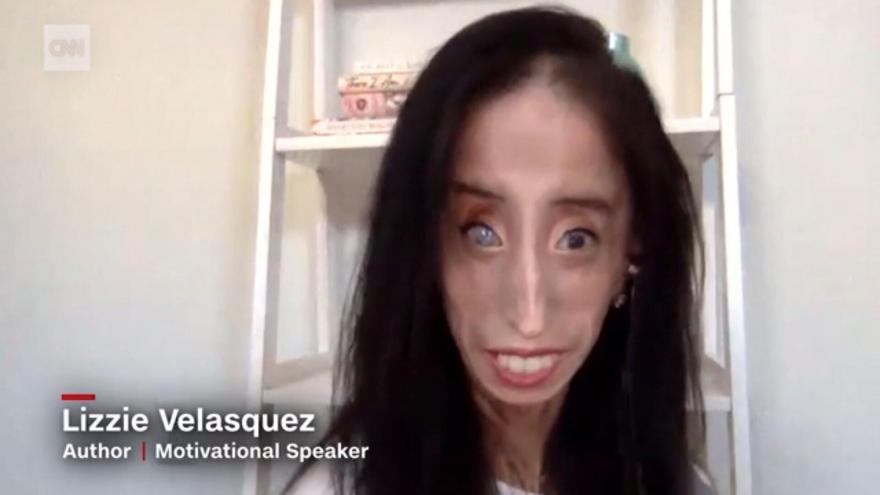 Lizzie Velasquez, a motivational speaker, went viral on TikTok earlier this month after she found users on the app were sharing her photo as part of TikTok's "New Teacher Challenge."

(CNN) -- It always happens the same way: Lizzie Velasquez comes across a hateful video or photo of herself late at night and once she sees it, she can't sleep.

The cruel comments make her blood boil. A light turns on inside of her, she says, and she'll stay up until she says something.

One of the motivational speaker's most-recent late-night pleas racked up over 2 million views and broad online support.

Velasquez went viral on TikTok earlier this month after she found users on the app were sharing her photo as part of TikTok's "New Teacher Challenge." Adults on the app who participate pretend to FaceTime their child's "new teacher." The "teacher's" picture usually is a mugshot or an image of someone making a silly face, but sometimes, those images are of Lizzie Velasquez or people with disabilities.

The child's reaction is usually one of shock or fear. And when the parent laughs, the child learns it's OK to laugh at others, too, Velasquez said.

"If you are an adult who has a young human in your life, please do not teach them that being scared of someone who doesn't look like them is OK, please," she said on TikTok. "This is a trend that needs to stop. Because we are humans. We have feelings."

Some of the users who have shared her image have refused to take their videos down, she said. Velasquez is more concerned about the people who may not have her social influence or reach because they may not be able to get a message out there to help make it stop.

"I am one person that this has happened to, but there are so many others who this is continuing to happen to," she told CNN. "I'm just going to keep doing whatever I can, whether it's speaking out about it, or whether it's posting my own videos trying to get these mini-lessons in, and hope that they help."

Cyberbullying has followed her most of her life

The harassment doesn't affect Velasquez the same way it used to.

She was born with Marfanoid-progeroid-lipodystrophy syndrome, an extremely rare condition that keeps her from gaining weight (she's weighed around 65 pounds for most of her adult life), affects her facial structure and has rendered her blind in one eye.

She was bullied growing up in Austin, Texas. Then, when she was 17, a YouTube user made a video calling her the "world's ugliest woman" and the bullying became global. Strangers online told her to take her own life and stay out of the public eye so she wouldn't blind people with her appearance.

She was quick to defend herself then, she said.

"I was trying to not let people online define me to the world," she said. "That was sort of my sole purpose in my mind."

At 31, and after years of speaking tours, four books and several TV appearances, she's softened her view. She mostly ignores trolls and she encourages people who belittle her to exercise empathy online.

Her feelings still get hurt. But standing up to online harassers now is more about defending people with disabilities or conditions, she said. Preliminary data on bullying and developmental disabilities has shown that children with disabilities are two to three times more likely to be bullied than students without disabilities, according to the National Bullying Prevention Center.

"There are so many people that want to be vulnerable," she said. "The only way things are going to change is if an individual changes themselves, and the only way it's going to happen is if adults now teach empathy and acceptance at home and understand what that looks like."

Melissa Blake, a freelance writer (who has contributed to CNN) and disability advocate, didn't even have a TikTok account when some friends alerted her that her face wound up on the app as part of the "New Teacher Challenge."

Like with Velasquez, Blake's photo was being used for laughs. It wasn't anything she hadn't dealt with before, but that didn't make it right.

So she wrote a piece for Refinery29 about the "New Teacher Challenge." Whenever her photo is used in that way, she wrote, she and other people with disabilities are violated.

"I think a lot of people that do this challenge forget that there's a person behind the picture that they're using," Blake told CNN. "For them it's a way to get a laugh out of someone else. What you're doing is not only violating that person but it's violating every person with a disability. By doing that, you're essentially mocking disabilities."

Blake was born with Freeman-Sheldon Syndrome, a rare genetic disorder that affects her bones and muscles. Her condition has made her the target of trolls most of her online life.

She's active on social media for her work, so she sees the users who hide behind fake usernames and empty profile pictures and land in her notifications every day. She's gone viral for her responses, including in September 2019, when anonymous Twitter users told her she should stop sharing photos of herself because she was "too ugly."

So she posted three more, in what she called an act of defiance.

"I think that's part of the reason why I'm so adamant about being so visible and posting so many pictures of myself," she said. "I think it's my way of, kind of, combating the trolls ... showing them that they're not going to drive me off social media, they're not going to stop me from doing what I do."

Both Velasquez and Blake are used to being targeted online. They're also used to receiving little support from social media platforms, they said.

After her harassment on YouTube, Velasquez said she offered to help the company with its comment section and how to keep things more civil. She's offered the same services to TikTok but hasn't heard back.

They've both had trouble reporting abusive content, too. Velasquez and Blake said they've reported comments and videos that targeted them or disabled people and weren't removed from platforms. In Velasquez's case, she said often her comments calling out online abusers are removed.

Platforms that host hateful content need to do more to combat it, Blake said.

"Social platforms need to take a more proactive approach, shut down these accounts or at least make the person take the tweet or TikTok video down," she said. "They have to be in this fight with us. Because the more that people do this, the more normalized it's gonna be."

CNN reached out to TikTok for comment and is waiting to hear back.

Both women agreed, though, that just as often as they're overcome with trolls, they're overwhelmed by support from friends and strangers online.

"Often we look at the dark side of social media, but I think ... my whole experience with bullying has showed me that there are good people on social media," Blake said.

Since Velasquez's TikTok response went viral, she's been tagged in videos from parents teaching their children about empathy and the cruelness of othering people for their differences. It's "incredibly encouraging," she said.

Now she's looking for a way to keep the anti-bullying momentum going.

For Melissa Blake, that looks like continuing to be online, defying the critics who say she should leave Twitter if she doesn't want to be harassed. It's writing about the callousness of the "New Teacher Challenge" and other forms of cyberbullying.

It's hard to live in public now -- the pandemic canceled most of Velasquez's bookings and speaking engagements for the year -- so she'll stay online, preaching empathy to parents and TikTok users.

She doesn't expect bullying to be eradicated from social media. But if she can leave the internet -- and now TikTok -- a little bit kinder than how she found it, Velasquez thinks she will have done her job.